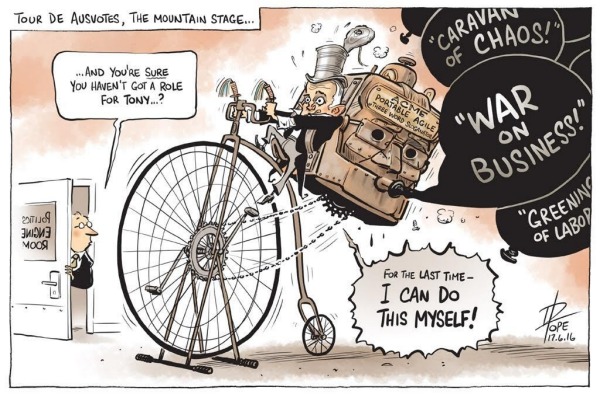 (Above: and more Pope here).

Well that was an interesting journey, speaking of caravans and computers of chaos.

Of course in another time and place, the pond might have had all its data in the cloud, and frolicked amongst the data wild and free, and with nary a thought as to speed and accessibility.

But the pond lives in the age of copper Malware, or Optus HFC - would you prefer fire or ice as the way to die? - and so massaging and maintaining +20TB of data becomes a meaningful activity.

Never mind, while the pond was away there were all sorts of splendid spectacles to be had.

The pond discovered that the Pope had a superstitious fear of 666, "Dead-eye" Bob Katter proved yet again that he's serious contender for a position in the pond's banner, the Liberal party, neck-deep in corruption, talked of Parakeelia as a clerical error, and Liberal candidate Chris Jermyn offered a timely impression of a vacant block while demanding timely pizza delivery ...

There was lots more but sadly, the pond also suffered a loss ...

The Greens have given preference to the Christian Democratic party of Reverend Fred Nile, who believes homosexuality is a "mental disorder", over the Liberal Party candidate for Sydney, an indigenous gay man who is pushing for same-sex marriage. (Fairfax here).

Sure it's a fuss only involving the very bottom of the ticket, but the pond has always been fastidious in putting Fred Nile last.

And for a moment Richard Di Natale attempted a half hearted, evasive defence of the move. (Richard Di Natale stands by decision to preference Fred Nile candidate above Liberal, with forced Fairfax video).

So the pond, having been forced into the electorate of Tanya (we shop at the same fruit and vegie store in Broadway, don'tchaknow) spent hours preparing a speech designed to torture a hapless Green worker at the polling booth, explaining why the pond would have to preference the Greens below Fred Nile ...

It's completely inexplicable how they ended up in that gully trap, and then clung to it, but symbolism matters and the Greens have once again symbolically mutilated their already notional sense of purity.

Speaking of symbolism, another matter drifted in front of the pond, in a way seemingly designed to bring the pond and the far right together in righteous indignation. 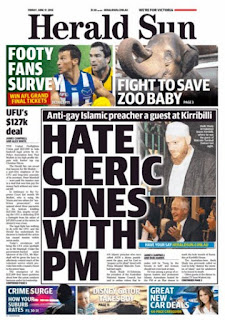 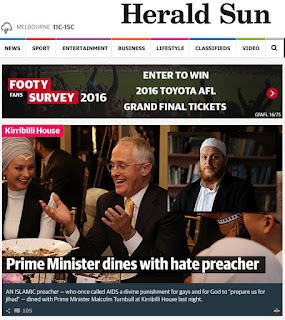 Of course it sent the Bolter right off ... and yet ... and yet ...this is one of those occasions when the smug Malware has come a cropper, not just amongst Islamic haters, but milder secularists and anyone with an interest in gay rights ... 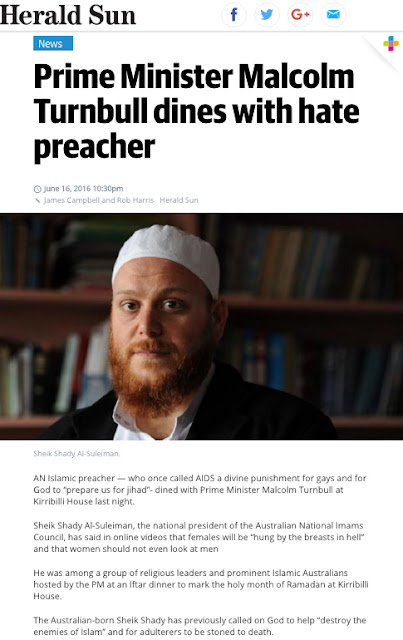 What is it with the stoning to death thing? Hung by the breasts in hell? And how about this? Fat cats dining together as the apocalypse approaches ... 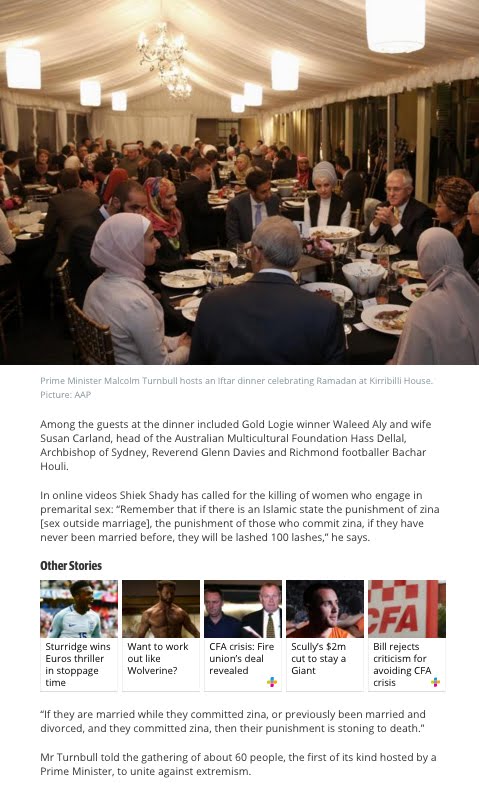 The sheikh shared some of his radical views in a video posted online in April 2013, where he said if homosexuality was out in the open 'amongst a tribe... Allah will send on them diseases'.

'Allah will send on them diseases they have never experienced before,' he was recorded saying. 'What's the most common diseases these days, HIV, AIDS, that's so common, and there's no cure to it. 'When did it exist? Just decades ago. And more diseases are coming... homosexuality is spreading all these diseases. 'Let's not deny the fact, don't call it the name of freedom or that, don't talk about that this is the freedom of action... these are evil actions that bring upon evil outcomes to our society. 'The prophet Allah, 14 centuries ago, spoke about whenever [homosexuality] is spread in a society diseases will be set upon them.' (the pond doesn't usually link to the Wail but the text is easy to google).

Up against this what did Malware have to offer? The usual smarmy, feel good stuff:

Who knows who's advising Malware's office - did they borrow someone from Di Natale's office?

The Shady Sheikh is well enough known and has attracted notoriety a number of times before, as can easily be found by doing a quick google. (For a really mind-mutilating experience he can be watched on YouTube, and you can find Robert Manne in The Monthly talking about the mad Islamic version of millenarianism, outside the paywall here).

Of course once the cat and the Sheikh were out of the bag, it all had to be walked back: 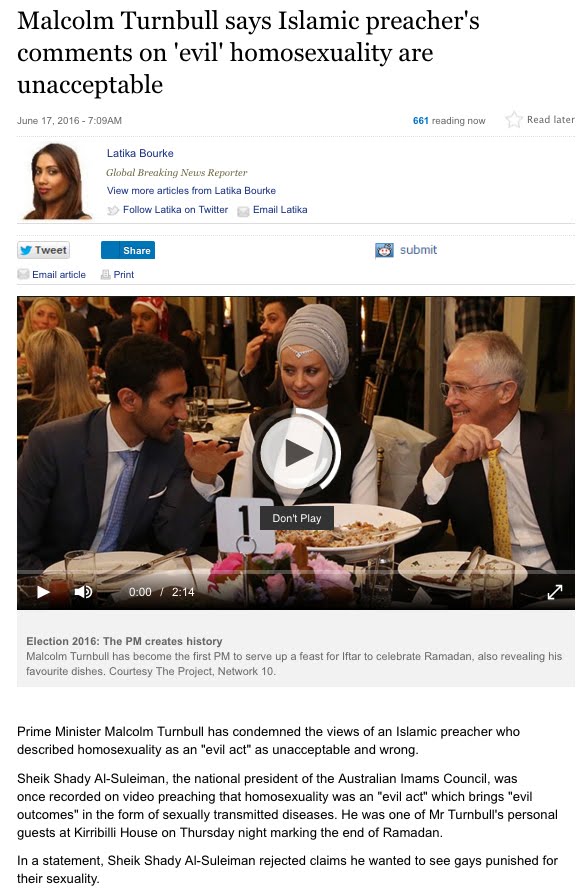 Of course the Shady Sheikh was also doing a classic Trump walkback.

Been quoted out of context, wish love to all humanity,  just loves ya, ya disease-riddled fonts of evil, just discussing what's in the good book, all the sorts of nonsense led by rabid fundamentalists caught out saying what they really mean and think ...

Could the pond get any more irritated, being forced into a situation where it began to sound suspiciously like the Bolter?

Aly also quizzed the Prime Minister on whether highs-speed internet via the NBN was available Kirribilli House, before Mr Turnbull replied saying he knew The Project host was 'keen' on the internet upgrade. 'It is very well connected to broadband,' Mr Turnbull said during the light-hearted interview.
'Can I say, I know you are very keen on the NBN, but let me tell you something. 'Within a week or so, a quarter of all Australian premises, that's households and business premises will have the NBN available.'
The Prime Minister later declared his favourite dishes of the Iftar at Kirribilli House was tabouli and fattoush - which is a Lebanese fried bread salad. He confirmed he did notfast in preparation for the dinner. 'I just showed up here for the meal,' Mr Turnbull told Aly on Network Ten's The Project from the dinner.

Sheesh, he just showed up for the grub?

He didn't turn up for the vote and the hope that his pandering would help him?

But here's the thing, neither of these facilitators of each other, high fiving each other, had anything much to say about the way Sheikh Shady Alsueliman is currently head of the Australian National Imams Council, and has been so since 2015 ...

Let's not pretend this man is just an outsider, a lone wolf eccentric, a black sheep outside the fold ...

It took a long time for secularists and the fair minded, and those who actually believe love means love to reign in the hate speech of Christian fundamentalists, and every so often a hoppy toad will still pop out of the likes of angry Sydney Anglicans, especially when they start talking about gay marriage or complimentary women ... (yes, the pond enjoyed the sight of the Jensenists popping up on The Drum and talking of a truly Christian response, and nary a complimentary Eve in sight).

Is there any further irony?

Apparently the Archbishop of Sydney, Reverend Glenn Davies, also turned up for the nosh-down ...

Birds of a feather. 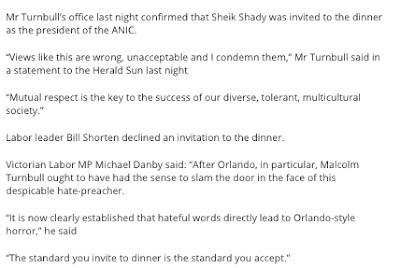 Well yes, that's the standard that's been accepted (though let's avoid going into whom the Labor party sups with, or the pond could be here all year).

The correct response in this situation isn't just to offer a mild rebuke or affect a distancing, or to berate the person who put together the list of diners, and so set up Malware for a pratfall.

The mistake of the minders  is easy enough to understand - this man is the president of the ANIC.

So a better response than all the mealy mouthed equivocations and walk backs would be to demand that this Sheikh is turfed out of his position at the ANC.

That'd make a nice righteous story for The Project.

Yes, the pond is back to dreaming.

Sheesh, perhaps it's time for the pond's anti-Bolter innoculation booster ...

Or perhaps the last few days has seen the wires scramble like a David Rowe cartoon, and more Rowe here ... 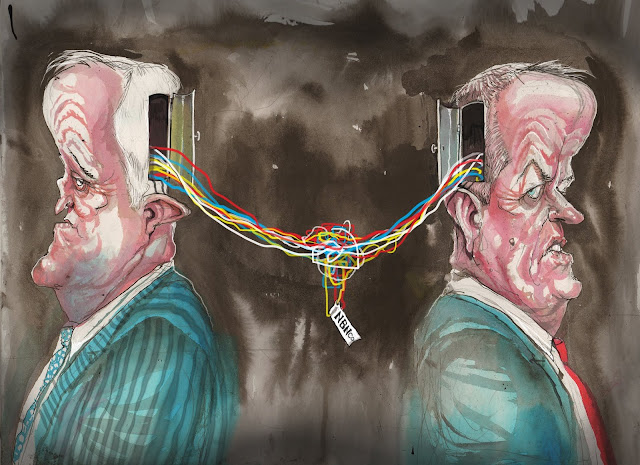 While the pond was away, the Bolter went on one of his great climate scientist rants. Perhaps this Moir cartoon contains the right antigen ... and more Moir here ... 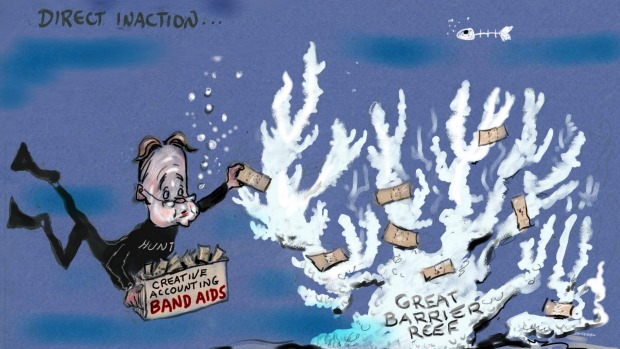