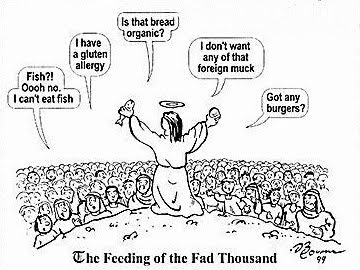 If you happen to be a coeliac - if you are, didn't you get the short end of the gluten straw - you'll understand the importance of food labeling.
Understanding the precise content of what's in food for those genuinely allergic to gluten (a protein found in wheat, rye, barley, oats and most derivatives) is essential to well being. Even a dash of wheat-derived soy sauce in a Chinese meal can produce a gut wrenching illness. (If you're one of the one in a hundred you'll already know about the Coeliac Society. Luckily, I'm not, but I've seen the disease up close).
We're talking here about genuine sufferers, and not hippie fellow travellers, who nonetheless play a helpful role by expanding the market for gluten-free product. Sure one week the hippies are off having a drink of wheat grass for its amazing powers, and the next wondering about their gluten-impacted lack of energy after eating a bowl of spaghetti, but the food faddist is handy for anyone looking for gluten free pasta (which tastes like cardboard, but never mind, it fills the stomach of the sufferer, and after awhile they forget the taste of real pasta).
Yet for a long time, and for no particular reason, food labeling failed to properly protect those who were coeliacs. As if somehow it was wrong for consumers to understand what was actually in the products they bought.
Well of course the reason why the food industry are so sensitive about this is (a) because they can't be fucked about their customers, it's all too hard, and why us, and (b) do you really want us to tell you about all the half baked derivative, additive, nerve jangling synthetic and chemical shit we add to the processed foods you eat?
Which is currently helping generate an obesity epidemic of astonishing proportions in some affluent countries.
Which is why you'll regularly find loons representing the interests of the food industry explaining how precise labeling of contents isn't in the best interests of the customer.
Well actually coeliac disease is just one form where it's vital - there are sundry allergies where it can play a role, often nut based, not to mention a desire for people to know what they're eating, and construct their diet on an informed basis.
So if you want to avoid eating palm oil because you think it's harming the orang-utan, feel free. I won't necessarily be joining you in a palm oil free diet, partly because I suspect I'm already on one, and partly because I'm allergy free, and partly because I'm an urban cretin, but let's agree that, at a minimum, food labeling on processed products should tell you precisely what's in your food.
Not so for Tim Wilson, who in a garbled, incoherent, counter intuitive rant seems to think that the rights of the consumer consist largely of eating whatever the food industry shoves down their throats, without any labeling as to content.
And amusingly he dresses this up in the context of the saving the poor, in Poor palmed off by a load of old monkeys:
In a choice between the life of a cute, fuzzy orang-utan and tighter food labelling regulations, who’d be surprised if the orang-utan won?
It’s what Melbourne Zoo is betting on in their campaign to have Food Standards Australia New Zealand regulate palm oil to be labelled as a separate ingredient on groceries.

Melbourne Zoo’s campaign is predicated on concerns that the developing country farmers aren’t doing enough to stop deforestation and the loss of habitat for orang-utans in their quest to keep themselves above the poverty line. And the solution is a misguided campaign to stop Aussies and Kiwis buying palm oil.

Well rare though it is, there are people who have palm oil and coconut oil allergies, and for that reason alone they should be able to find out what's in the food they buy. So let's re-phrase Tim Wilson's opener:
In a choice between the life of a cute, appealing five year old with a palm oil allergy and tighter food labelling regulations, who’d be surprised if the cute five year old won?
Well actually, I'd be surprised, because food manufacturers are like eels, always wriggling on the hook, and seeking anonymity as a way of achieving deniability, and the likes of Tim Wilson are with them all the way.
As to the matter of the orang-utans and palm oil, and the suffering of the poor in Indonesia and Malaysia who might lose a profitable line of business, if people want to avoid eating meat, or any other food stuff because of their perceptions about the way its production affects them or the environment, why should they be prevented?
We're not just talking burgers here. You won't find me campaigning to turn the world vegetarian, but if someone wants to find out whether their eggs are genuinely free range, or their canned soup contains sugar or high fructose corn syrup, why should they be denied the right to know?
It's called informed choice. From my perspective, or yours, it might be considered a wrong choice, or an eccentric one, but when I find someone arguing for ignorance over information, they immediately go on the A list for suspect motivations.
Let's pass over Wilson's valiant fight to protect Indonesian and Malaysian families - in much the same way as I tend to pass over those who recommend the health giving virtues of anti biotics in pig and chicken production - to take a look at one marvelous logical construction:
It might seem counter-intuitive, but the best way to improve the environment in poor countries isn’t to stop them developing, it is to help them prosper. All over the world the evidence shows that as societies become richer they’re more concerned about, and can afford, to protect their environment.

Might seem counter-intuitive? Or just plain dumb.
Oh yes, every day as I've got richer, I've become ever so terribly concerned about the environment. Every day I go out and sweep down the concrete, and I do get ever so anxious about the tar in the summer heat, and as for the paving bricks out the back, I regularly scrub them down with an acid bath to make sure that surly green mould can't gain a fingerhold. And I always pick up the litter. I'm concerned about protecting my environment of tar and cement.
As for the Hunter valley? Keep tearing it up and shipping its guts to China, I say, so I can keep living my rich urban lifestyle.
Yes, it's a problem for affluent countries that they've already comprehensively urbanised their lifestyles, and to maintain their affluence, they've condoned the destruction of vast swathes of rural landscape (think Murray Darling in Australia), and as a result it's a tad hypocritical when they look at the destruction of the Amazon rain forest or the vast burn offs that take place in Indonesia.
But you really have to be a chain jerker to pretend that richer societies show the way in protecting their environments. Just take a walk or a drive through the moonscapes that now litter the Hunter valley.
Oops, I think that love of the concrete jungle makes me like a palm oil grower preferring human comfort over the fate of the endangered orang-utan:
But so long as poor palm oil growers are worrying about where their next meal is coming from, concerns about the environment are likely to come second.

Sure, and when they're richer they'll erect a museum to celebrate the extinct orang-utan, and the tourists will flock there in droves.
Now for the obligatory mantra of abuse, which often takes the form of latte sipping extremists, or chardonnay sipping inner western romantics, or delusional greenie. What's the term of abuse for the day?
It’s a decision that looms much larger than that of armchair environmentalists who are concerned that they can’t tell whether palm oil is an ingredient in their potato chips.

Armchair environmentalists!
As opposed to potato chip manufacturers who just want the right to be able to roam wild and free and not bother with food labeling. Well bugger them, and their desire to keep the light of information switched off, and their customers in the dark.
I wondered exactly why Wilson was so fearful, so I took the trouble to click through on to his bio. A rampant student politician (who boasts about it), and now director of the intellectual property and free trade unit at the Institute of Public Affairs. And now we can add defender of the rights of potato chip manufacturers to keep their customer base uninformed about their product.
Say no more. Why is it always that free traders of the Wilson school always love to talk about choice, and its importance (if I watch another American movie with the line 'there's always a choice' I'll scream), but when it comes down to the wire, why does choice have to be ill-informed, ignorant, simple-minded, fact-free choice? We hide and you decide.
Say no more. In that particular institute, talk of informed choice and consumer rights is a bit like sprinkling holy oil on a satanist. You can see it tear and gnash at their skin like sulphuric acid ...
But if you're a coeliac, you'll have more than a passing interest in any campaign to dilute food labeling. You might even form a bond with baby orang-utans ...

Oh, and here's a better header for Wilson's next column. Battery farm the apes now! 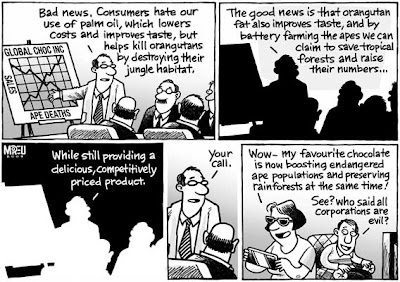