In which the pond finally weakens, comes clean, and admits to a secret, sordid life watching bald-faced liars frolic in a soap ... 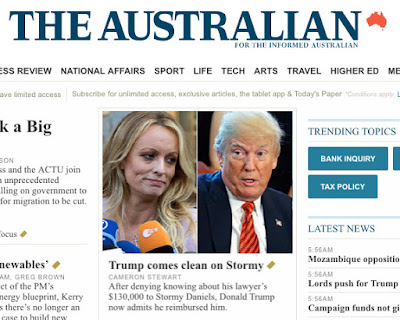 The pond is a little late this day, because (a) there were no planes overhead, and these usually act as the pond's alarm clock, and (b) the pond was up late on its regular Stormy Watch, which these days is more compelling than your average soap, and which now rivals the fascination the pond once had for Watergate …

Say what, now Avenatti is on Colbert? Where will it end?

Right from the get go, the pond knew the reptiles wouldn't be able to cope.

The problem is to report the matter with a straight face and not call the Donald a bald-faced (or bald-headed) liar …but of course the reptiles are incapable of coming clean on the Donald (please, distracting no argument about barefaced or boldfaced, as here).

Is there an irony here in the way that the reptiles have picked a photo of the Donald standing with a certified lover of a guaranteed criminal of the Joe Arpaio kind? 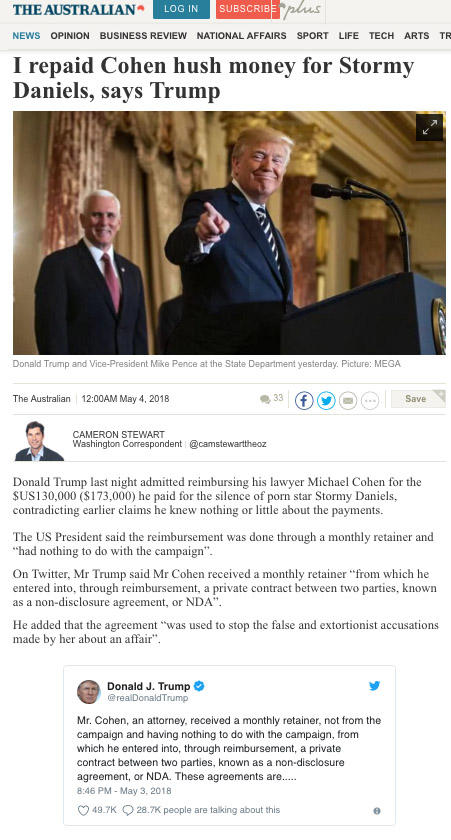 Apart from the routine sight of reptiles solemnly reporting on tweets, right there is a refusal to come clean, with the reference to false and extortionate claims.

And will the reptiles' man in the States raise other comical matters? 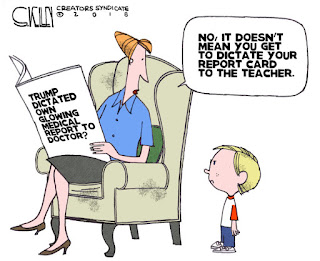 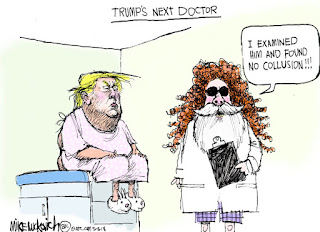 But on with the tweeting reporting … 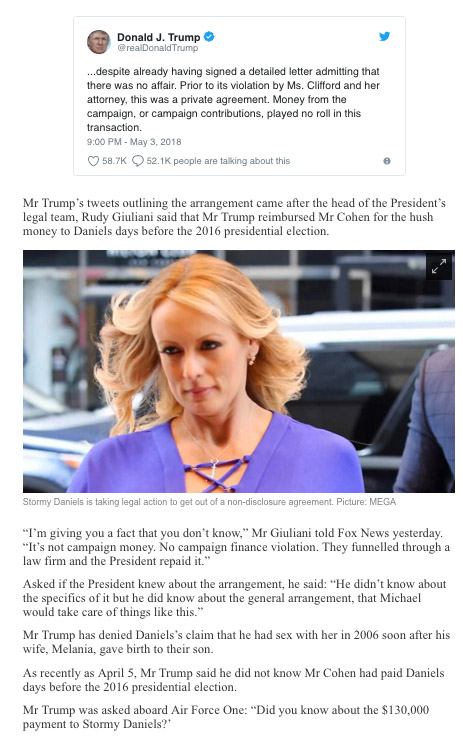 Indeed, indeed, how would a professional liar answer that question, and what possible implications could his capacity for lying have when conducting negotiations? 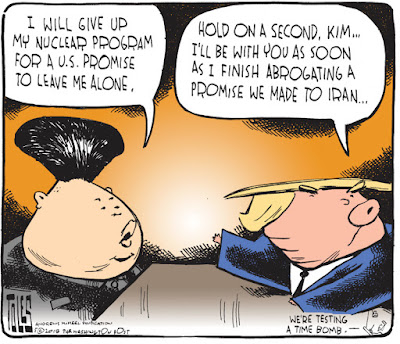 Never mind, back to the lying and the obvious lying answer … 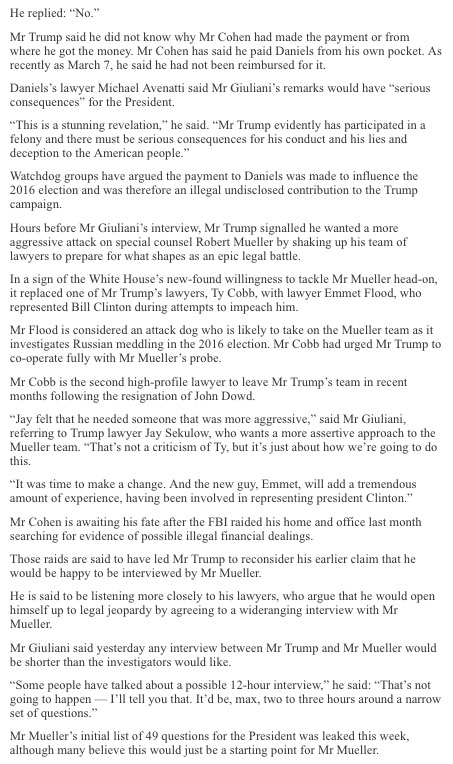 Um, could the pond stop there again?

You see, it wasn't Mueller's list of questions that was leaked this week, it was Jay Sekulow's list, providing another rich vein of comedy …

Now let’s examine how the logistics of the Mueller-question-leaking scenario might have proceeded: The special counsel’s team briefs Trump’s lawyers on their avenues of inquiry; Trump’s lawyers listen; Sekulow compiles a list of 49 questions; Mueller’s team, then, somehow, obtains that list of 49 questions; Mueller’s team leaks that list to the New York Times.
Yeah, right. (WaPo here).

Did the pond mention bald-faced lying? 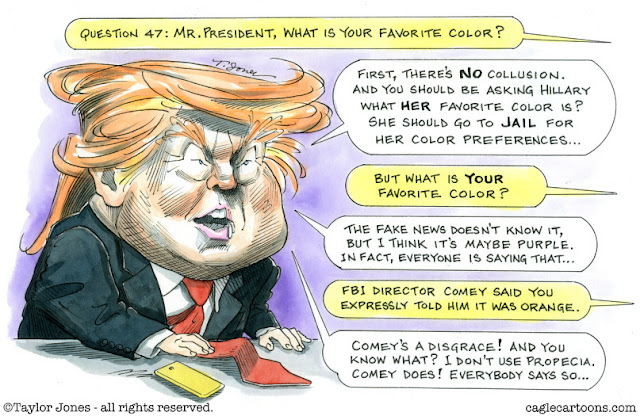 The trouble is, the lying's so dumb, all it does is produce endless amusement:

We knew those questions were leaked by the Trump team. When the New York Times announced that they’d received several possible questions that Mueller might ask Trump, the source was never in doubt, only the motive of the Trump lawyers doing the leaking.
Elie Mystal mused that they might come from the Giuliani side in a sly effort to impress upon Trump exactly how serious this is. But that theory never really sat right with me.
Could Giuliani, with a prosecutorial and Biglaw background, really pull such an amateurish stunt? Would he really want to expose work product to the scrutiny of the press and risk showing the world the slapdash nature of Trump’s legal defense? As one former prosecutor pointed out, the leaked questions couldn’t even get basic grammar right!
Questionable strategy and grammatical applesauce?
By GAWD… that’s Jay Sekulow’s music!
Obviously, this all comes back to Jay Sekulow. He’s Brainy Smurf after Brainy already landed on his head 20-30 times too many. Reports suggest that he’s the one who wrote the questions that ended up in the Times, and theoretically the mastermind behind the leak, intended to suggest that Mueller has overstepped his mandate … (Above the law, here).

And speaking of spin doctors … 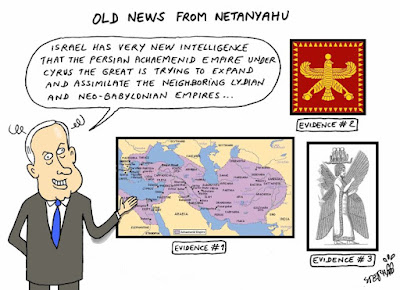 And so back to the reptiles for a last gobbet … but what's the bet there'll still be no mention of the doctor? 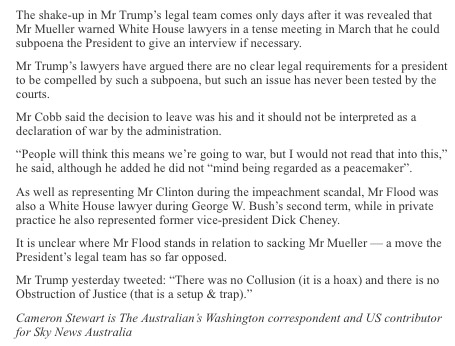 Speaking of tweets, and lies, this, with more, in Vox here … 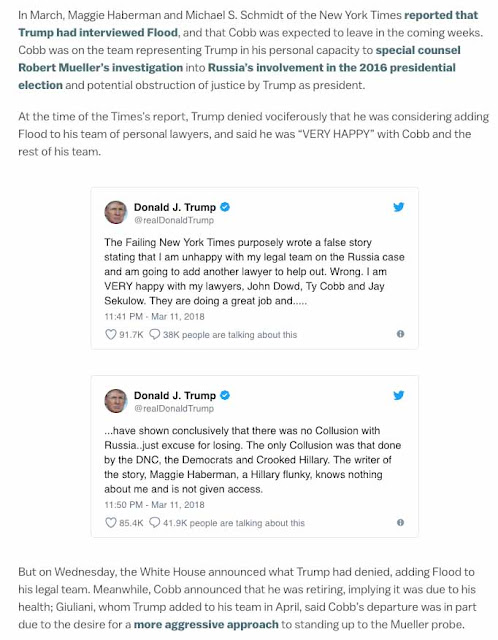 All politicians lie, and most people too …but the astonishing level of porkies coming from the Donald means that your average disingenuous reptile intent on keeping a straight face is no longer up to the job.

… which is why that reptile header, "Trump comes clean on Stormy", is another bald-faced lie.

The Donald piles lie upon lie, and he's lied so often that he's incapable of coming clean …

But what joy that is for the cartoonists and those in search of a substitute soap, or a circus with its only acts a huge range of clowns, especially when it involves Fox and friends disingenuously dissembling about the liar in chief they routinely celebrate …

Why even Rowe took time out for the circus this day, with more Rowe here … 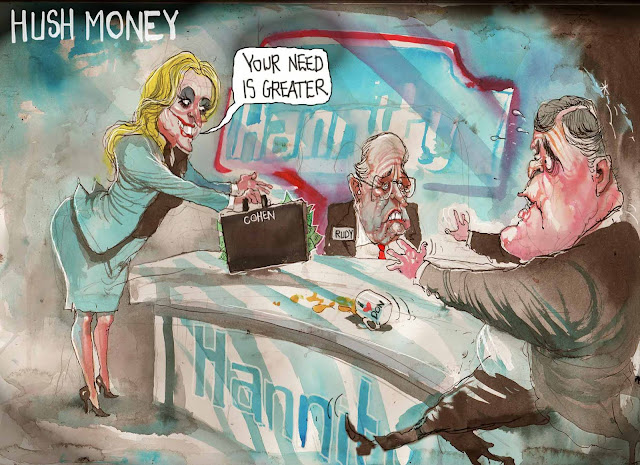