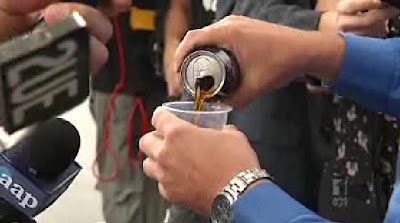 (Above: the abstruse science of denialism). 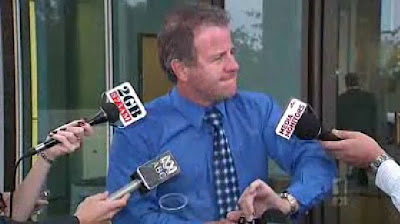 (Above: the scientific exponent of the science of denialism, Dr. Dennis Jensen. Full text and actual moving images here).
Perhaps one of the more absurd sights so early in the week was Dr. Dennis Jensen flourishing a can of coke to unveil the carbon dioxide within it, after waving around some charcoal and showing it falling to earth.
Jensen is of course a full blown feral denialist (sceptics, you might remember, according to Quadrant, accept AGW as real and just argue about the size of impact), but if you act as a child, and argue like a child, surely you should be called a child. Or at least a clown, right up there with Wilson 'bring me that ironbar' Tuckey ...
What is it with Jensens generally? What is it with this particular Jensen?
Poor Tony Abbott. It's hard to pretend you care about the crap of climate change when you have a complete and utter loon sitting on the back bench squawking nonsense and indulging in silly theatrical displays.
Jensen, who won his PhD in the physics of ceramics, is prone to this kind of outburst:
"Albert Einstein was very much criticised by Hitler, and Hitler actually had a group of 100 top scientists in Germany write a book called 100 scientists against Einstein,'' Dr Jensen told reporters in Canberra.

"Einstein was asked: `Doesn't it bother you Dr Einstein that you've got so many scientists against you?'

"And he said: `It doesn't take 100 scientists to prove me wrong, it takes a single fact'.'' (here)
So now you know. The CSIRO and the BOM are run by a bunch of Hitler-worshipping neo-Nazis taking direct orders from Fräulein Gillard, ruler of das herrenvolk, and so completely incapable of delivering a single fact that proves Jensen is a total and comprehensive goose.
But I digress. After yesterday's outburst by Paul Sheehan about the way Chinese students and the Labor party have ruined NSW (please take a handkerchief dosed in strong perfume for fear the stench from the sewer of Cul-de-sac of broken dreams might overwhelm and sicken you), today is Gerard Henderson day.
Please, enough with the party poppers and the balloons and the comical hats folks, this is desiccated coconut day, and the header gives the game away: Bush and his allies deserve respect after earlier push for Arab democracies.
Yep, it seems that the left is in disarray, and their answers are simplistic, and in the action against Libya, no one is mentioning Israel.
Could that be because Israel thought it would be a jolly good thing if Mubarak survived the protests in Egypt and business as usual could be the order of the day - along with Saudi Arabia's King Abdullah (a pretty pairing on view in Israel: Mubarak here to stay, or the standard line trotted out in the Jerusalem Post, Mofaz: It's best for Israel if Mubarak overcomes protests).
Yes, it's best not to mention Israel, and its right wing government's view that the Arabs aren't ready for democracy.
But that doesn't stop Henderson from blathering on about Israel in his usual blinkered way without once mentioning the way Israel warmed to the notion of Mubarak the dictator, and were startled and unhappy to see him fall.
Instead, in his usual myopic way, Henderson manages to conflate the situation in Libya with the war in Iraq, and hail Israel as a democracy which gives greater rights to Arabs than Arabs enjoy in virtually all Arab states, which I guess is a great way to justify a set of second class rights (seeing as how Henderson manages to overlook the US Department of State report which noted institutional, legal and societal discrimination against the country's Arab citizens, here).
As for Iraq as a nascent democracy ... well I guess nascent is the word, since it's hard to imagine how the country came back from the cocked up, half arsed, inept, massive dose of murder, anarchy, brutality, torture, death and slaughter dressed up as a war of liberation, and embarked on as a result of repeated falsehoods and lies.
This is not a fashionable point. Yet the record indicates it was the administration of George W. Bush which first raised, in a serious manner, the issue of democracy in the Middle East.
Damn right it's not a fashionable point as it was the administration of George W. Bush, in cahoots with Tony Blair's administration, which raised in a serious manner the right of a government to lie to its people and embark on an ill-considered, ill-managed, stupefyingly inept war mongering adventure in the Middle East.
Who knows how the current adventure in Libya will play out, but in the circumstances, at least the Europeans could foresee that if the Gaddafi regime triumphed, they would be facing (a) a mass exodus which would make the current exodus a trifling matter, and (b) a humanitarian crisis, if as likely, Gaddafi embarked on revenge and a killing season, and (c) having failed to act, all that would have been left for the world to do was wring hands and watch as stuff happened.
In short, the momentum for change and repression and action came from entirely different sources than the war in Iraq, and it is profoundly disingenuous to pretend otherwise ... (even the lizard Oz manages to publish a piece explaining Libya is not Iraq).
Not to worry. Henderson, in his usual prattling Polonius way, manages to elide and distort his way through the present crisis, celebrating the potential for democracy in the Arab world while smugly noting that Israel is on the sidelines in the current turmoil. Which is perhaps just as well according to the unofficial debriefing by one Israeli government minister:
... I'm not sure the time is right for the Arab region to go through the democratic process," he (an Israeli government minister) adds. (Egypt's Crisis: Israel Backs Hosni Mubarak's Regime).
It takes some cheek to completely ignore Israel's response to current events in the middle east, but you have to hand it to Henderson. He has plenty of cheek. Even chutzpah ...
Meanwhile, since a Jensen started out explaining to us that coca cola contains fizzy carbon dioxide - who would have guessed it's a carbonated drink, not to mention a source of tasty high fructose corn syrup (get your coca-cola formula here) - why not provide a nice circularity by heading off to The Australian to read Niki Savva's A spiritual guide to climate change.
That's right. Once again, an alleged journalist simple mindedly compares the scientific issues involved in climate change to a religious debate:
If Tony Abbott could only embrace the new global religion where belief in climate change is obligatory and in God optional, then he would spare himself the punishment of its spawn, the New Inquisition, and be better off politically if not spiritually.

His acceptance must be unreserved. There is only one path to enlightenment this century and those who doubt or dare express even minor misgivings are condemned straight to hell or political oblivion by the zealots.
Yep for sheer arrant nonsense and wretchedly obscurantist dumb fuckery, you can't go past a member of the lizard Oz's commentariat when they get to scribble about science. It's a religion you see ...
Amazingly Savva puts Christopher Pearson to shame. At least confronted by science he can't understand he resorts to sociology as well as religion. Savva can't get past the wafers ...
What's worse, she keeps the religious metaphor running for par after par as she charts Tony Abbott's 'lapses' from the one true faith, including his most recent 'lapse' ...
Well now we now the answer to any problems we face. Ten hail Mary's, a couple of Our Fathers, and she'll be right (hush child, only dedicated scientists do the whole rosary).
And nary a mention of the Jensen hiding in the attic, ready to pop open a can of Coke or watch a bit of charcoal fall to the ground, proving that Newton probably got his idea at a coal mine rather than by watching an apple fall.
Meanwhile, if you missed Media Watch's coverage of the actual science of climate change amongst the shock jocks and the AM radio crowd, you can catch up here.
That way, when somebody asks you where are the clowns, send in the clowns, you always have that standard answer, don't bother, they're here ... (and they sent the ring master ACMA packing with a fine flurry of ping pong balls and false noses and squeeze horn) ...
(Below:
Child: look mum, it's a rock.
Mum: hush, child, it's charcoal. Let the science man explain it to you.
Scientific politician: does anyone know what that is? Charcoal, also known as carbon. If you notice when I let it go, it doesn't float into the air ....
Child: So mum, climate science says that charcoal floats in the air, and is the basis for the anti-grav machine that will make cars and oil redundant?
Mum: Hush child, this is way too complex for you to understand.
Child: But mum, if climate scientists say charcoal floats and is an anti-grav device, I want an anti-grav bike.
Mum: Just drink your coke and rot your teeth you wretched child, and get bloated and gassed and supersized and full of chemicals and carbon dioxide because carbonated drinks are ever so good for you. If only we had an atmosphere full of coca cola, the world would be saved and the poor people of Asia would never go thirsty). 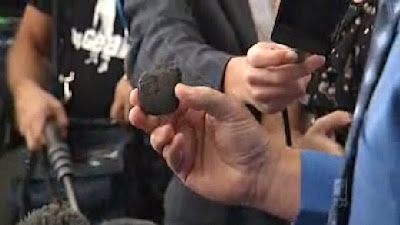