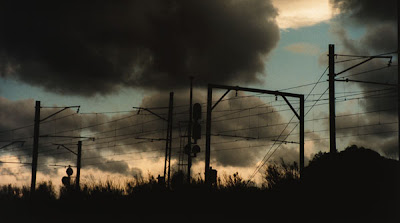 (Above: an exquisitely moody landscape, done way back in 2005 when Bill Henson collaborated with Richard Tognetti on Luminous, and clearly had lost his mojo, until he got his mojo back in 2008, and then lost his mojo again in 2010. Loon pond is currently organising a search party for Bill Henson's mojo. You can read about Luminous here and here).
Was it so long ago that Miranda the Dvine was in a frenzy about Bill Henson and his photographs of nude girls?
Here she is fuming and frothing in Moral backlash over sexing up of our children, and by golly she knew who was responsible for it all:
The effort over many decades by various groups - artists, perverts, academics, libertarians, the media and advertising industries, respectable corporations and the porn industry - to smash taboos of previous generations and define down community standards, has successfully eroded the special protection once afforded childhood.

Um, yeah, like the special protection Lewis Carroll and his camera afforded it. Or the toffs paying for the under age prostitutes in Victorian England. Or the man boy relationships of Sparta.
Never mind, don't you just love that subtle juxtaposition? Artists and academics, with perverts right there in the middle. Roll it around on your tongue. Doesn't it sound just fine. Artists, perverts, academics.
Oh excuse me, must go and get out the pitchforks and perhaps an adze or two, and certainly some hot tar and loads of feathers. Goddam correct order, and correct weight: artists, perverts and academics.
But it wasn't just artists and perverts who understood that simple nudity was shocking, shameful, guilt-laden, Catholic church riddled pornography of the vilest kind, and that head to toe dress must be worn when venturing out in to public (hang on, don't we want to ban the burqa? Oh never mind).
No, no, no, it was everywhere, all around us:
It is now impossible to shield children from a culture dripping with sexual imagery, in which Saturday morning cartoons are interspersed with soft-porn music videos, pole-dancing kits with sexy garters are marketed to little girls and huge billboards for "Longer Lasting Sex" dot the landscape.
Sheesh, someone in the SMH must have a full time job wiping the spittle from the Devine's lips so that she can fulminate a little more. The inspiration for the Devine's rant about the imminent end of western civilisation as we know it was of course the invitation to Bill Henson's exhibition of photographs in 2008, and it prompted one wag at the time to scribble these immortal words, here:
There has never been a accusation of abuse by Henson’s models or the parents of these models. In fact several former models, now adults, have spoken out this week in Henson’s defense. The photographs are not intended to titillate. This is a simple witchhunt stirred in part by Sydney Morning Herald columnist Miranda Devine, that reliable enemy of nuanced thought.
Sob. In that one short phrase - roll it around on the tongue, relish it, spit it out into the chill autumn air - that reliable enemy of nuanced thought - the thousands of words scribbled at the pond have been reduced to one succulent expression. It almost strips away the purpose, the meaning of loon pond.
What else is there to say, but ... Miranda Devine, that reliable enemy of nuanced thought.
Except of course that the reliable enemy keeps on rolling along, and today has blessed us with a report fresh from the front line of salacious trivia, under the header He ignited controversy - now he's ditching it.
It seems Bill Henson with his latest, carefully guarded and discreet exhibition, the photos already checked and certified by the censor, has disappointed our bubble headed booby:
The first sign that Bill Henson may have lost his mojo came at the front door of the Roslyn Oxley9 Gallery in Paddington last night.
Lost his mojo? What exactly does that mean? Why it means that Henson has serenely done his thing, to the great disappointment of the slobbering, salacious media, forming their usual rucks and intrusive scrums as they race to feed off whatever cheap sordid titillation they can find, like the grub street hacks they often want to be:
Burly bodyguards turned away photographers who had arrived to record the controversial photographic artist's first exhibition since police closed down his 2008 show over nude photos of a pubescent girl, which even the Prime Minister declared were ''revolting''. [A Fairfax photographer managed to take several photos before being asked to stop.]
Revolting? Funny, these days the commentariat are busy assuring us that Chairman Rudd is revolting. Or at least that we should be revolting.
Ah but that fuss was two long years ago, and thanks to the Devine and others, it seems that Henson has now reformed, become a better person:
But mobile phone cameras abounded inside the gallery where 31 of Henson's untitled, exquisitely moody 127x180cm photographs adorned the walls, priced at $30,000 each.

You see. Exquisitely moody, even if untitled. Suddenly he's an artist again.
But wait, couldn't he think up a title or three? Some artist ...
The artist himself said he just wanted the opening to be about the art not the controversy. Although, he noted, ''controversy is interesting'', before he was silenced by his hovering public relations agent Sue Cato, who declared he would not be speaking to the media.

''I've told so many nice people they can't interview Bill, so I can't let you,'' she said, rather undiplomatically.

Undiplomatic? Who, moi ponders the Devine? Moi, who lathered up a storm about the overwhelming evidence of psychological damage wrought on a generation of children, particularly little girls, of premature sexualisation? What the heck? Doesn't this Henson chappie and Cato public relations person realise that as a bubble headed booby moi can't hold a consistent attitude over two years, let alone two weeks?
Because you see Henson is at it again:
The biggest sellers of the night were the nudes, Henson's signature images - young and nubile, a girl of about 15 or 16, though no one is saying, since the 13-year-old of 2008 caused such consternation.

Shocking. Stand by for a slobber of indignation.
Oh wait, hang on, it's not actually shocking this time:
This time, however, no pubescent nipples were visible - just the soft curves of a ''susceptible shoulder'' as Henson's friend Edmund Capon put it.

A susceptible shoulder on a fifteen year old? WTF? Susceptible to what? A nibble, like a tender young ice cream? Is this more of the psychological damage so rampant two years ago, the work of perverts with a very postmodern agenda and old fashioned feminist views?
Steady, steady, get around behind Bluey, no need to panic the sheep. What's left in the mouth is a deep disappointment that Henson has lost his mojo and failed to delivery on controversy. Here's how the Devine ends her piece:
But the landscapes and architectural images outnumbered the nudes, which the art collector and North Sydney councillor Jilly Gibson found ''puzzling''.

Ah dear deep and insightful art collector Jilly Gibson. Puzzled by this puzzling turn of events. An artist who might be interested in landscape and architecture as well as nudes. Shocking, deeply disturbing, even problematic as she ponders the ponderous.
Surely our Jilly can detect an alarming change. The artist has been brought to heel, turned domestic, a dingo now sitting before the blazing fire in the lounge like a lap dog:
Despite Henson and Cato saying that the artist had been unfazed by the 2008 furore, Gibson could detect a change.

''It's very different from the last show,'' she said.

''They were almost all nudes last time … he should have stuck to his guns and gone against the critics.''

You mean, gone against the Devine?
Never mind, I too was always disappointed when Picasso failed to relentlessly paint nudes, and sometimes even went so far as to waste his time painting a work like Guernica.
Well somehow Jilly's disappointment transmitted itself to Miranda, and now we know that Bill has lost his mojo, and we don't know where it is. Mojo-less and perhaps also eyeless in Gaza.
And worst of all, no nudes to slobber over and whitter about, and tweet over, even if not using twitter. Well at least not decent mojo-laden nudes.
Roaming around Wiki, I recently came across this:
Schizophrenia is a mental disorder characterized by abnormalities in the perception or expression of reality. It most commonly manifests as auditory hallucinations, paranoid or bizarre delusions, or disorganized speech and thinking with significant social or occupational dysfunction. (here)
Not that we're suggesting anything here, least of all the latter part of the definition might apply to anyone we've just been scribbling about.
No, we're just happy to pay tribute to another writer:
Miranda Devine, that reliable enemy of nuanced thought.
More on Bill Henson, and a few photos, here. The thought and photo police have kept Henson's visual presence down at his home gallery here, though you can find examples of his work from his various exhibitions, even if all that's on view involves a "susceptible shoulder".
I still can't work out what the shoulder might be susceptible to. White ant, mould, humidity, a honey and soy sauce? Or brainless gits who can't even get the irony being ladled all over them?
(Below: untitled). 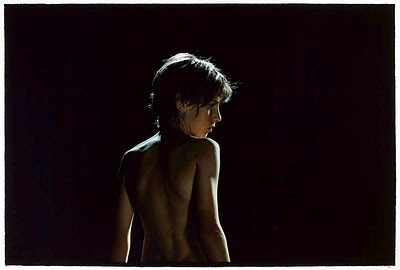