Chairman Rudd, Julia Gillard, and coming up behind Miranda the Devine and Gen Y ... 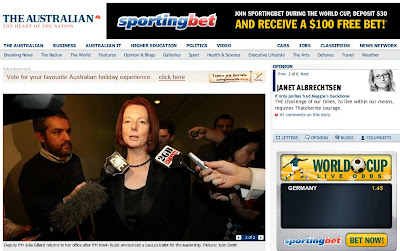 Everybody at the pond is terribly excited by all the squawking and the polling and the balloting.
It seems that we totally missed the feminist point of Janet Albrechtsen's column If Only Pollies had Maggie's backbone:
... let's be blunt. It's not at all clear that political leaders today, most of them men, have Thatcher's balls when it comes to transforming their sclerotic economies.
This carefully encrypted message, which probably required decryption using an Enigma machine, is no doubt what inspired Julia Gillard to make her lunge at Chairman Rudd. The heavily ballsed Gillard clearly aspires to emulate Maggie Thatcher, and the covert, coded message of support from Albrechtsen no doubt gave her supreme comfort.
Janet Albrechtsen, a rallying point for redheaded Labor politicians, a feminist at the redoubt. Who'da thunk it? Just remember you read it here first at the pond.
Meanwhile, Peter van Onselen's column Julia may have missed the bus last night also shared the front page with the Oz's brand new rotating whirlygig roundabout of images and stories, naturally featuring Chairman Rudd and putatitve Chairwoman Gillard: 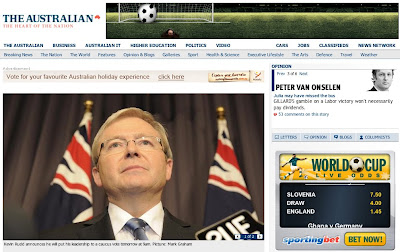 That's what happens when you refresh some parts of the front digital page, and not others, and leave poor old Peter dangling under the masthead, and oh the dangerous art of casting the runes of political prophecy:
... if Labor loses the next election and this government becomes a oncer, the caucus meeting will be remembered as the moment when Labor MPs squibbed on their duty to themselves, and Julia Gillard cast herself as a wimp who might never become prime minister, as someone unwilling to strike even when it was in her and her party's best interests to do so ...
...By not challenging, Gillard has chosen what appears to be the risk-free approach, but she must be nervous about Rudd's capacity to do what's necessary to retain Labor's slender nine-seat margin. If he can't and Labor is thrust back into opposition after one term, Rudd's name will be mud inside the wider labour movement. But Gillard also will find it difficult to retain her credibility.
Sure, he gave himself a little out in his last sentence - hoping that Gillard would become the first opposition leader to go on to become prime minister, or some such nonsense - but it's one reason why here at the pond, we very rarely give in to the temptation to utter predictions, prophesies, prognostications or pronouncements.
Only a day old, the digital ink barely dry on the iPad, the papers still waiting to be turned into wrapping for fish and chips, and the world's moved on.
But as always the pundits scribble and scribble, and never mind what happened yesterday, but always look to tomorrow with fresh hope and certitude. Why am I reminded of the English Edwardians, enjoying the first decade of the new century, only to discover that all that industriousness and peaceful English déjeuner sur l'herbe led directly to World War I.
Was it only a few days ago that the fatuous Henry Ergas famously and fatuously quoted A statesmen, Bismarck famously observed, is a politician who thinks of his grandchildren. (here).
Was this merely a reference to the path trodden by Bismarck as he sired three children who sired an abundance of children ready, along with a unified Germany, to participate in the first and even the second world wars, or simply a snide Bill Heffernan style Delpic oracle style anticipation of Julia Gillard coming to power? Hey Bill, feeling knackered today?
Ah well, we've long dreamed of the day that Australia might have a female Prime Minister, and now here it is. We wish we could say we'd been up all night personning the phone for Chairman Rudd, getting the numbers up, but truth to tell, it was all those door stoppers outside the church and hanging around with the Jim Wallace ACL crowd that did him in for us a long time ago.
Here at the pond we like our politicians lightly buttered with a delicate hint of secularism and a spicy robust refusal to cater to the religious crowd.
But stay, the result still hovers in the air, and meantime, we've got other fish to fry, poor hapless columnists who filed their copy early, and so couldn't join in the squawking.
Yes come on down Miranda the Devine, with Flirty old men need to back off. What's this? The Devine has gone feminist. The centre won't hold, the world is turned topsy turvy, everything is upside down. Chairman Rudd gone south, and the Devine bashing men, the days of talk of hapless men and wifely duties seemingly long in the distant past (but still available here under the header Wifely duties spark firestorm after therapist's book, in which the Devine naturally took the most recalcitrant position possible).
But there the Devine is, bashing up Mack McInnes, one time David Jones' CEO, as being in the last cohort of dinosaur males, and celebrating the strength and resilience of Gen Y women, when once she would have dismissed them as screen deadened and brain dead Gen Y, synapses snapped, and long ago ruined by computer games and all the screens in the house.
In her usual inimitable remarkable way, the Devine gets it wrong by making it a generational issue, clearly disturbed by her own personal experiences, and she wraps it up with these two pars:
Some of the world's most charming people are men who love women too much. They might not make the greatest husbands, but many women enjoy their attention, so we shouldn't be out to stigmatise energetic heterosexuality.

But after years of getting away with being sleazy, men over 40 are going to have to get used to keeping their hands (and bellies) to themselves around young women.
Indeed. Let's not stigmatise energetic heterosexuality, and let's not stigmatise energetic homosexuality. But let's just do a little editorial job on the Devine's last lines:
Sleazy men are going to have to get used to keeping their hands (and bellies) to themselves around indifferent women.
Sure, it lacks punch, sure it lacks oomph, sure it lacks a thesis, sure it's a statement of the bleeding obvious. But that's what makes the Devine's musings so astute. Wrapping up the banal and the obvious in some kind of generational conflict to add spice to the verbiage.
You see, it's not just a question of caricatured older generation vs younger generation, or stereotypical older males harassing sweet younger things. It's not just older men in positions of power, though sometimes they're the worst offenders, but anyone in a power situation who choses to exercise that power in a sexual way on an unwilling recipient ... or anyone simply harassing anyone else ... and a Gen Y man or woman can do that to another Gen Y woman or man.
And by the way, can someone please explain to the Devine that her current infatuation with Gen Y is as repugnant and repellent as her past infatuation with Susan Greenfield's considered analysis that they were brain dead? She's showing all the signs of inter-generational Stockholm syndrome ...
Don't believe me?
Julia, Julia! Come quick. Look at what Miranda the Devine wrote, you tell her Julia!
Oh yes Australia's first female Governor General swearing in Australia's first female Prime Minister. Now that'll be a sight to see ...
(Below: meanwhile Miranda the Devine, accompanied by the purifying power of bottled water shipped in at vast expense). 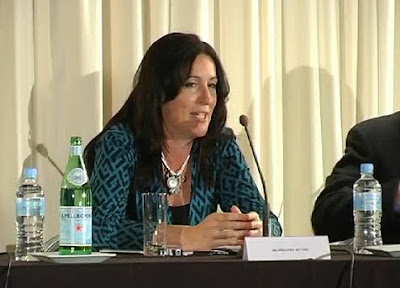