Why the country needs the ABC? Because the alternatives include Karl Stefanovic and the reptiles of Oz ... 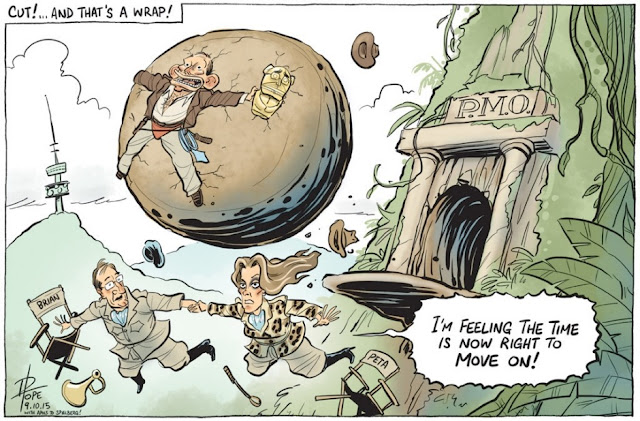 (Above: that's the comedy out of the way, thanks to the immortal Pope and more papal musings here)


What a terrible man Mark Latham is.

Not in a Muriel's Wedding, "you're terrible Mark" sort of way, but just simply terrible. A boor and a bore, a crass, prejudiced, bigoted bully boy, and lordy lordy how revealing was that handshake and did Australia, back in the day, dodge a bullet ... who'd have thought the pond would ever be saying that about John Howard?

Latham was just one of a group who occupied the Nine network last night for the cathartic exercise of shouting at each other.

Presiding over it, if that isn't an abuse of the concept of "presiding", was the hapless lightweight Karl Stefanovic. Removed from the fluff and the pap and the floss of breakfast television, here was a man completely out of his depth. He would have been better off turning up with a few stiff ones under his belt - apparently it helped in the morning show.

The pond switched off after only a little while. There's no need to endure complete crap, but if ever Nine had wanted to provide concrete evidence as to why the country needs an ABC, this was it. Who could imagine a show that would make QandA look like an exemplar for chat television?

Does the world need another chat show where people shout at each other, providing plenty of heat but zilch by way of illumination or understanding?

Well the pond at least doesn't ... and it'll be lucky if this disaster makes it into the new year. Usually the pond enjoys watching a train wreck unfold in slow motion, but this time it was hard to suppress a cry of "oh the humanity, the humanity."

Now others have made similar observations, so there's no point in repeating the obvious - the header says it all: The Verdict recap: Karl Stefanovic's shout-fest was a stinking mess, and no match for Q and A.

Neil McMahon made it to the end of the show, which is more than the pond can say, and the pond feels guilty linking to a chance to see the show online here, because it's like linking to a garbage dump of bile, hate, fear and loathing.

The only fun in that link is heading off to discover that Anne Henderson was one of the clowns shouting at each other, but that Nine cares so little for details, she was transformed in the show's copy into Anne Anderson. 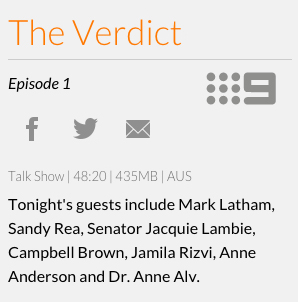 Well, sometimes a nom du plume and travelling incognito is handy because if anyone trashed the reputation of the Sydney Institute last night it was the female version of the prattling Polonius...

Oh and that'd apparently be Dr. Anne Aly - Alv in the copy - and that capacity for getting the details wrong is a clue to why the pond's conspiracy theory alleges that the ABC encouraged Nine to go ahead and produce this stinking, fetid mess ...

Even the reptiles resorted to sniggers:

Karl Stefanovic struggled to keep order among his six panellists during the opening episode of The Verdict, Channel Nine’s answer to Q and A.
Former Labor leader Mark Latham fulfilled his role as resident stirrer, taking shots at every guest except former AFL footballer Campbell Brown, who presumably can handle himself better than your average taxi driver.... (paywall protected, google for more, but why bother?)

And so on down to:

Panellists fielded a couple of questions from the audience, then a ‘verdict’ was delivered on how they handled each issue.
Perhaps surprisingly, Mr Latham won his share of green lights, but at this early stage the program itself is probably stuck on amber. And Tony Jones’s job as QandA host appears safe.

Amber? So that's the light you need for a complete disaster?

Of all the twitterings about the show, this is the one that struck a chord with the pond:

The immortal Frontline, though it's been sad in recent weeks to see Rob Sitch try to flog a dead bureaucrat horse and produce a comedy spark in Utopia.

Meanwhile, over at reptile la la land, the pond has been scrutinising the runes to discern the first hints of dissatisfaction, and things are beginning to shape up nicely:

Hillary? Can a comparison get any crueller?

And then the Oz editorialist decided to mock Mayor Turnbull: 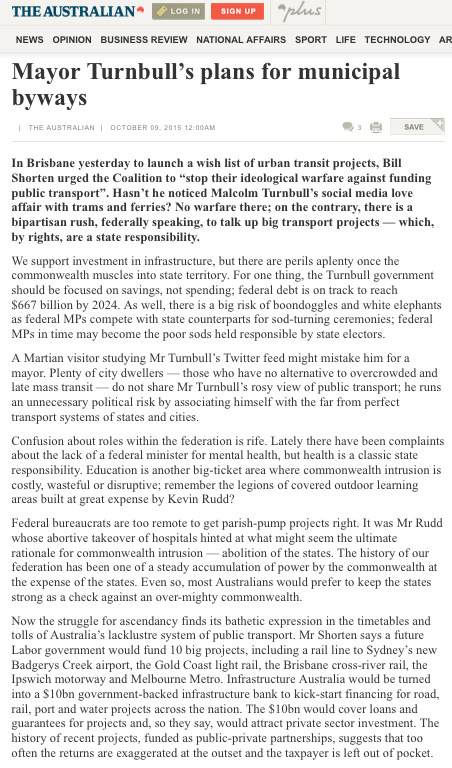 Of course you'd have to look long and hard to discover the reptiles railing against Tony Abbott and his grand plans as the infrastructure king. Ah the dreams, the memories: 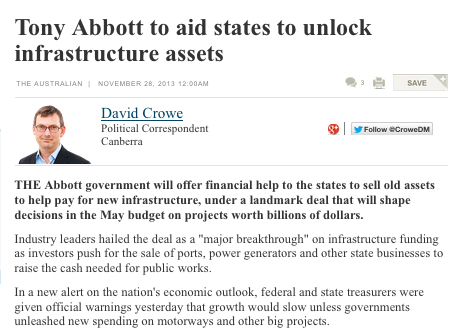 And so on, but back then, Abbott wasn't talking about fixing those dreadful public transport systems so many punters have to endure. Who'd want to be associated with that dreck? Better to fly a chopper into the bunker in the hipster 'leet Surry Hills ...

Now there's dark talk of Whitlam excess, and Utopia gets a run, and nary a mention of the sheer folly of setting up a major airport in a major city without a rail link, a feat previously managed by Melbourne, and didn't the taxi drivers love it, and then wonder why Uber eventually came along ... 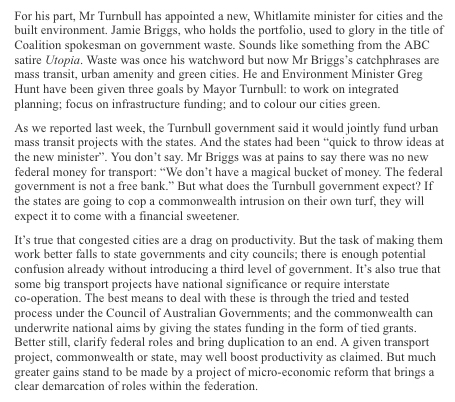 Because, it should go without saying, in reptile la la land, the last thing we need is green cities. What we need are hot rocks and plenty of them ... and anything with "public" in it, as in "public transport" is only suitable for losers and dropkicks ...

And where were the reptiles when Abbott was strutting about as the infrastructure king, and conspiring to produce a monstrous new road intrusion on the inner suburbs of Sydney? 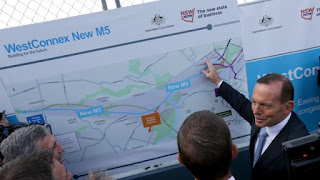 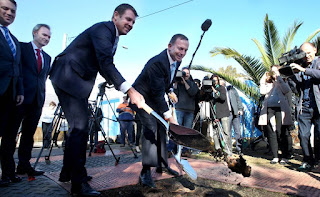 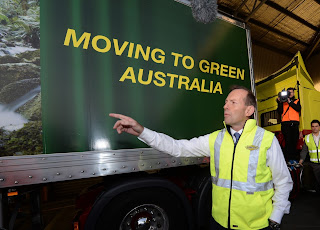 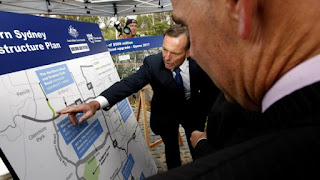 Yes, the reptiles were cheering Abbott along ...

Now they've decided they don't like the Whitlamite tendencies in Malware ...

Conclusion? Things are bubbling along nicely in reptile la la land... the only problem is what the pond thinks of as a Latham one ... Bill Shorten as the alternative, offering a woefully inept set of infrastructure notions ...

The infrastructure fuss - the fear of anything "public" - the relentless love of roads, up there with a love of coal - and the rest of the destructive negative hand-wringing about proposals to fix things - reminded the pond of just how singularly counter-productive, negative and destructive the Murdoch press has been over the years.

The pond was impressed by this set of memes pointing out the obvious in relation to the rambling Newman and the onion man and their cries of media victimisation: 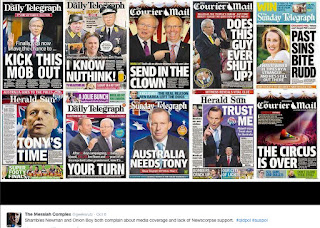 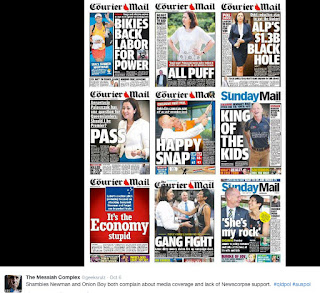 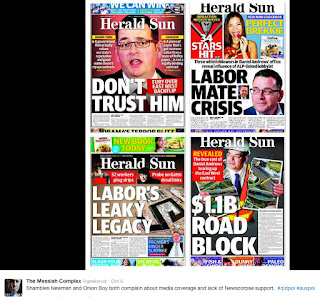 Indeed, indeed, and that short selection could be multiplied a hundred fold. So what's the implications for significant matters? 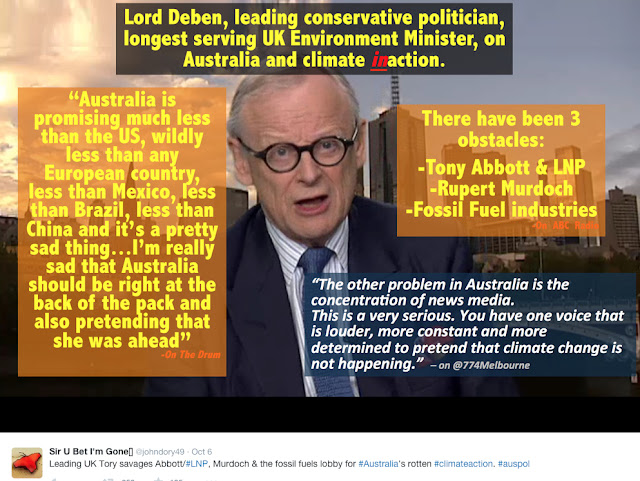 It was satisfying to see Deben wipe the floor with Joanne Nova on The Drum here ... and vastly more entertaining than watching The Verdict ...
Posted by dorothy parker at 10/09/2015 07:37:00 AM