Rachel Weisser, Kentucky Fried Chicken, and mine tinkit it good ...

And so we come to the strange case of the Kentucky Fried Chicken advertisement (above), which has got Rebecca Weisser of The Australian terribly excited in No taste for black humour.
Here's how she sets the scene:
Blame fast food. If it wasn't for Hungry Jacks employing an unfortunate Indian student, and chicken franchise KFC airing ads suggesting black people enjoy fried chicken, Australia's true identity as a racist cesspool would be just our guilty secret.

The ad, pulled late this week by KFC, showed an Aussie surrounded by a crowd of dancing, cheering West Indians, who were blocking his view of the cricket. He offered them KFC. As a result they all sat down and watched the cricket.

Say what? Were we watching the same commercial? The one where a white man surrounded by blacks said that he was in an awkward situation. An awkward situation? Because they were rastas banging on their steel drums, and thus generating a power of bad body odour?
Or because being surrounded by blacks is always an awkward situation for whites? Especially if you make the comment when you seem to have a black woman gyrating by your side, the closest of a bunch of wild things snatching at your precious chicken?
And did the same commercial also suggest that the way to calm the savage breast, to soothe the savage breast is to offer the black man and woman chicken? Because they immediately calm down and conform to proper white man's civilisation, cease their rowdy behaviour and might in fifty years or so, even manage to show the kind of politeness we expect in the members' stand?
It's always a nifty idea to flip the idea behind an ad like this - a black man surrounded by a bunch of white men and women, getting alarmed as the excited and acting rowdy whities prance around. Would the line about being in an awkward situation and feeding the whities a bunch of chicken work as well? Maybe, but I doubt it, unless you're into post-modernist post-ironic discourse.
Weisser unfortunately doesn't have much room for self-awareness, as she ends her piece getting agitated about the offensiveness of the suggestion that the advertisement might have been a tweeny weeny insensitive. And she does so in a way which is becoming standard form in the MSM, which is to reach out to the intertubes:
Not so a contributor to YouTube, TrueUSMarine, who writes: "This commercial is offensive, it can offend people, WHICH IT HAS. Or are you Aussies too f . . ing stupid to realise that? You are all morons if you can't understand that."
No sign of racism there.
Well no, actually, there is no sign of racism there. Calling a nation full of fucking stupid morons is perhaps making a leap into the world of mindless exaggeration, but it doesn't actually involve racism.
Racism, as it's conventionally defined, involves matters of race. Not to be confused with abuse revolving around religions, or ethnic status, or nationhood. Calling Australians in general fucking stupid morons might have to be categorised as scientific, or accurate or inaccurate, or a new crime - perhaps countryism - but Weisser's desire to end her piece with a sharp little spike results in a sharp little indication she doesn't have a clue about what might constitute racism. Say in a KFC advertisement.
To reach that end point, Weisser embarks on a heavy, self-indulgent serve of irony and sarcasm:
Australians, clearly, are just too pig ignorant to realise just how offensive was this ad. A full 85 per cent of them couldn't see what was wrong with it and claimed it was all a misunderstanding, that Americans don't understand anything about West Indians or cricket.

Followed by an entertaining, but it turns out, utterly irrelevant anecdote about Little Black Sambo, a book written by Helen Bannerman in 1899, and the way the author got caught out by the word Sambo having a different meaning in the United States.
As with Sambo, so with KFC. The Huffington Post's internet readers, being more morally attuned than Australians, immediately picked up the ad's racist overtones. The website reported the views of one Jack Shephard, who realised cricket and West Indians were irrelevant and cut to the chase, titling his post, "KFC's Racist Cricket Ad". He introduces the video, "What's a white guy to do when he awkwardly finds himself in a crowd full of black folks? KFC has the answer."

Ah, I see one Jack Shephard has actually watched and deconstructed the meaning implicit in the ad. Foolish Jack Shephard, who doesn't understand that this is all about Australia's special cricketing relationship to the West Indies. He probably prefers baseball and Ken Burns' films about a sport even more boring than cricket. Say no more.
How about a bit of heavy handed sarcasm to set things right? And make Jack Shephard understand?
The clue to unlocking this cross-cultural racist conundrum is the chicken. Fried chicken comes from the deep south and so does slavery, so if you like fried chicken, you like slavery. Obvious, really. But KFC has staked its whole damn business model on the whim that the entire planet likes to eat fried chicken, so is plainly an irredeemably racist corporation.
Well perhaps it's just an irredeemably dumb corporation, serving up crappy chicken via crappy advertisements. But specious pleading on a planetary level doesn't excuse the way that the ad makes the error of suggesting a white surrounded by blacks is in an "awkward situation", and chicken is in the only solution. But I do thank the company for guidance on how to behave next time I'm strolling down 125th street in Harlem. Carry a big bucket of KFC ...
Meantime I got to wonder about Rebecca Weisser and who it was who could produce such a reflexive knee jerk tilt at the Huffington Post's internet readers, in much the same way as she'd whinged about the internet's treatment of Australians.
Turns out that Weisser is or has been op ed editor for The Australian. Say no more. Logical thinking not a prerequisite. Here's how Crikey described a foray by her awhile ago:
French films have gone downhill since they were made by Americans. It’s a rare thing that Australian hack Rebecca Weisser steps out from behind the op-ed page, which she edits for Captain Chris ‘Queeg’ Mitchell — indeed she’s usually supervising items for the page’s gotcha ‘Cut and Paste’ section, such as the recent startling news that Barack Obama said ‘Michelle and I’ where ‘Michelle and me’ would have been technically correct. You go, Woodstein!

Weisser got a chance to show her own commitment to accuracy with a piece for the paper’s awful ‘Wry Side’ column, in which she suggested that recent French films get good reviews because the critics like to annoy Americans: “Back in the 1980s, when things actually happened in French movies, Juliette Binoche made The Unbearable Lightness of Being. These days it is French films that have become unbearable” Weisser wailed in the piece’s opening para. Nice line, only marginally spoiled by the fact that Unbearable…Being wasn’t French. It was USA-produced, directed and co-written by an American, from a Czech novel, with a Swedish cinematographer, Irish and American co-stars, and dialogue in English (information courtesy of that obscure source IMDB.com). Don’t expect to see it in ‘Cut and Paste’ anytime soon. Coming up, Weisser on the decline of Danish theatre since Hamlet.  — Kim Serca (here).
Sorry, Kim you got that wrong. What came up was how Australians were cruelly maligned by the world's misunderstanding of a KFC advertisement. Sheesh, and we wonder why the Indians in Australia are so sensitive these days ...
Never mind, all's well that ends well, and once again President Obama is on hand to provide the healing solution: 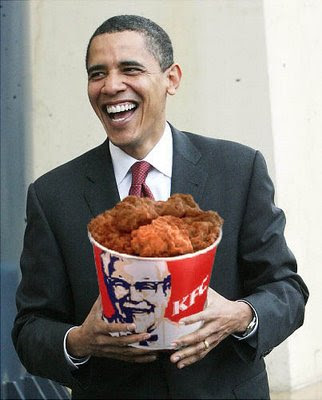 Oops, sorry, picked up that image from a racist anti-Obama website. Lucky that site only suggested the United States of America was in an awkward situation by having a black Muslim president, and the only way out might be to feed him KFC.
Lordy, how sensitive those Huffington Post Americans are, and how misunderstood are we Australians ...
And now a blast from the past, when Australian advertising really knew how to sell: 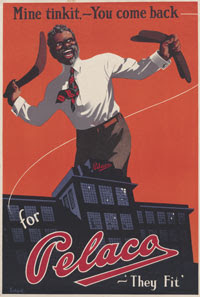 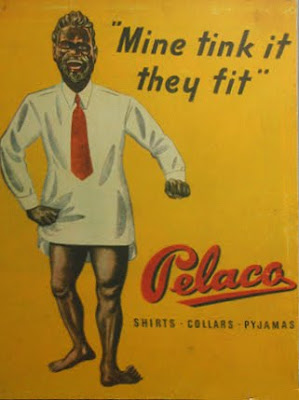 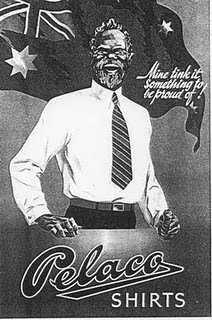