Piers Akerman, and the case for indigenous hunting of whales, stiff lizards and commentariat columnists ... 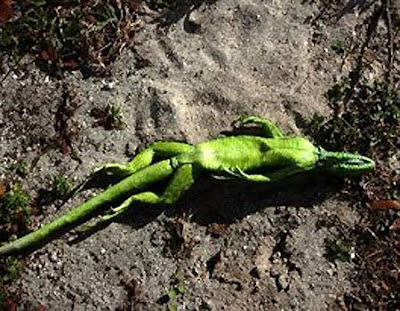 (Above: a stiff lizard in a state of suspended animation, ineluctably reminding me of commentariat columnists).
You can always rely on Akker Dakker aka Piers Akerman for the most superficial and silly of observations, based on the most cursory observation of the headlines.
Here's his end note for his latest thoughts on Japanese whaling, Tough talk comes a little late:
If these environuts really want to do some good, they should take themselves to Florida, where it is reported that tree-living iguanas have been frozen out of the branches by the latest subzero temperatures to result from the global-warming trend sweeping the world.

The place to save whales is in the courts, not on the high seas, and the stiffened lizards need help now.
You see how easy it is to conflate everything into a joke when you're a crazed ideologue? The global warming trend is causing sub-zero temperatures in Florida, much the same as Al Gore does wherever he goes, and no doubt because the Australian Bureau of Meteorology is part of a vast international conspiracy to cook the books - such nonsense, all this talk of the second warmest year in the warmest decade on record.
And then the punchline about the stiffened lizards needing more help than the whales. When of course the iguanas falling out of the trees aren't generally dead, at the point of a harpoon, and cheerfully flensed in a scientific way, to be served up to the gourmets of Japan. Instead chances are good that when the weather turns warmer they'll get out of their suspended animation and return to their trees.
Not that they should be in Florida trees.
The iguanas are exotics from central and South America. They 're likely the result of house pets being released into the wild by their owners when they got too big or too tedious to handle. It's regarded as one of the most invasive species in Florida, and it's as good a chance as any to indulge in a decent cull of the plant-eating invader (Kamikaze iguanas fall from Florida's frozen trees).
We look forward to Akerman's stout-hearted defence of the role the rabbit plays in Australia's eco-system, and the vital need to preserve it against farming interests. Along with the endangered prickly pear and the joyous squawk of the myna bird (can we still call them Indian myna birds in these troubled times without offending Akerman's concern for exotic species?)
But why let an interesting insight get in the way of a cheap joke? Akerman's remark would be rather like me saying it'd be great if commentariat columnists would fall out of trees like Florida's frozen iguanas, so they could be clubbed to death and used as compost. I know, I know, it isn't funny, but I like it. Wouldn't it be great to organize a baby seal bashing of commentariat columnists who used the term environuts?
Well I have to dawdle and find amusing things to speculate on, because Akker Dakker is, as always, painfully predictable.
First he wants to slag off Chairman Rudd and Julia Gillard for doing nothing, and then only belatedly lodging an official request with the Japanese government to end its whaling in the Southern Ocean:
Not that the gesture will achieve anything. The Japanese can legitimately claim that they have traditionally hunted whales and that Australia, with its history of dealing with indigenous rights, should respect the wish to keep an aspect of traditional culture alive.
You see, in much the same way as I've always traditionally hunted commentariat columnists, and so the ritual seasonal baseball bat-bashing of such silly gooses should be preserved as a way of keeping my traditional culture alive.
Until next week when when I write a column about how silly and painful it is that lefties and ratbags and deluded indigenous folk want to keep elements of traditional culture alive.
In essence, the blind defence of Aboriginal culture has been a disaster. The reality is that few of the defenders of so-called traditional rights have the first clue about pre-contact Aboriginal culture.

Today, there is not a single Aboriginal living a traditional life. This is not a tragedy: it is a reflection on the fact that traditional Aboriginal culture cannot work in a 21st-century Western society.

Not only would many aspects of traditional Aboriginal culture be in breach of Australian law, they would also be in breach of many of the UN’s unobserved treaties and obligations.

In truth, few Aborigines have demonstrated a deep desire to understand and practise the culture of their ancestors.

This was underscored when the National Museum displayed a suite of stone tools almost a decade ago. The spearheads and stone knives, all painstakingly napped and flaked, were the work of a white anthropologist because there was not an Aboriginal with the skills to make them. (Aborigines trapped in Never-Never).
Sic transit gloria mundi Japanese and Australian indigenous culture.
It's handy when you don't believe in anything, because then you can drag anything off the shelf and use it in the argument. You know, write tosh about indigenous Japanese rights while slagging off indigenous Australian traditional culture, and being a slack arse thinking that it doesn't actually matter if you should mean what you say, not when meaningless blather can fill up a column of bile and prejudice:
The Japanese can also point to Australia’s annual cull of kangaroos and ask why this nation slaughters an animal which is its national symbol yet gets upset when whales, which know no geographical boundaries, are hunted.
Uh huh. Yes, and what about the annual cull of sheep and cattle? Does being a national symbol get you out of jail when you're tasty eating? Or creatures in peril?
So does this mean we should go back to the days of Moby Dick, or should we worry about the future of these roaming wretches of the sea, who recognise no geographical or national boundaries, and who therefore might in fact be dangerously apolitical?
Acting Prime Minister Julia Gillard has declared that Australia will push the anti-whaling case “with all of our force”, but that statement rings increasingly hollow given her government’s inaction since coming to office.

Before the Rudd government wastes more taxpayers’ money pandering to the Greens and the extreme Left, it should consider some facts about Japanese whaling and the aggressive strategy pursued by the Sea Shepherd organisation and its leading light, Paul Watson.

Australia’s jurisdiction over the area of the Southern Ocean it claims as territorial waters is not recognised by the Japanese, nor by most other nations. It was a handy construct to ease the minds of the population last century when colonial land-grabs were still all the rage.

So that means that Australia has no legal basis for action, nor any other country a basis for court action?
So how do we end up with this sanctimonious piece of claptrap?
The place to save whales is in the courts ...
Well not if you have Piers Akerman Q.Q.C. (querulous quarrelsome chappie) organising the brief. Especially if the Japanese should have the right to eat whales in the way we eat kangaroos in the way we eat bluefin tuna until there's no more tuna left ...
But you've guessed it. Akker Dakker has really only scribbled the entire piece so he can have a go at Sea Shepherd and Bob Barker and Ady Gil for harassing the innocent Japanese, just going about their annual scientific business of whale slaughter.
Poor innocent hapless Japanese, nasty evil greenies.
But if court action is useless, and we must respect the rights of indigenous Japanese, and Australia has no role to play, I guess it's on with the slaughter of the whales, and while we're at it a slaughter of the stiff lizards ... and I guess a slaughter of commentariat columnists wouldn't hurt either, if you're interested in seas without wild life and a media empty of specious nonsense and meandering vitriol ...
Unless of course you'd like an iguana as a nice jub-jub pet. Once you've flown to Florida to save one or two - naturally using carbon credits for the flight - why not bring them back to the warm climes of Oz, and once you've finished with them - such pets can be quite tiresome - why not drop it off at the offices of the Daily Telegraph? I'm sure Akker Dakker will give the stiff lizards all the love and attention and care they need ...