Helen McCabe, Paul Colgan, George Williams, and Prince Willy on tour with the curse of the Windsors ... 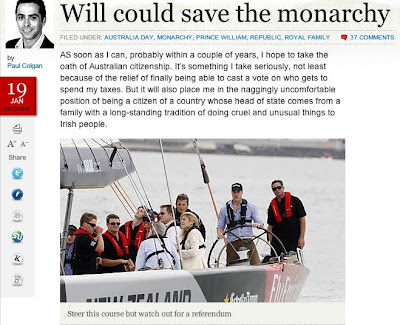 (Above: Paul Colgan in The Punch, going where even the Australian Women's Weekly doesn't to go, here. What's this? A shot of an active yachtie prince to bolster your musings about the monarchy? What about the curse of the Windsors and the lack of sparkle, bright Irish eyes, what have you got to say about that?)
Oh dear.
When Peter Costello writes a column such as Let's not go backwards for the sake of ideology, is it any wonder that loon pond immediately reverts to the squawking about Prince Willy being in town?
Having tormented us for years as a politician with his smug smarmy smirk, is Costello now going to torment us all through the year with columns telling us his 'woulda', 'coulda', 'shoulda' schemes for the commonwealth? Including an absence of ideology and an excess of pragmatism and calcium in his bones? Could he become the next Hewson? Is he already the next Hewson?
Never mind, back to the fuss generated by Prince Willy, and exceptionally grave news folks, from The Australian Women's Weekly in Helen McCabe's revelatory A lovely young man but regally bland.
Regally bland? Oh the cruellest cut of all.
Prince William's arrival in Australia has not sent a flurry of excitement through the office of The Australian Women's Weekly.
In fact, as I write there are no plans to do anything on the visit at all, and the young prince has never been discussed as a potential cover.

That is not to say many of the 2.1 million readers of the magazine are not very fond of the 27-year-old.

I suspect a large proportion of those readers are perfectly comfortable with him one day becoming king of Australia.

But, but, aren't they likely lads, out raging and fighting wars, this noble pair, this Harry and Willy? Cry god for Harry, England, St George and perhaps even a horse.

There is much affection for them both and a general sense that they have turned into fine young men, give or take a few late nights out and the odd cigarette. But our interest in the boys has certainly dissipated with time.

Dissipated? Oh dear, whatever could be the problem?

It is partly because Prince William, while once so reminiscent of his mother, now appears to be a lot more like his father.

This is not a bad thing, but it does not have quite the same appeal as Diana, princess of Wales.

William seems to be a lovely young man, and he will probably make an excellent king, but in a celebrity obsessed world the public has come to expect some sparkle.

No sparkle? Bubbly without the beads? Soda water without the carbonated fizz? Like his dad Chuck? Oh whip me with a lettuce leaf, the tragedy of it all. Mom's genes lost out.
The last time the prince sparkled, he was 16 years old and on his first visit to Canada, where he was mobbed by girls wanting to marry him.

The lack of interest in William is also partly because he has a long-term girlfriend in Kate Middleton, a bald spot and, as previously mentioned, the personality of his father. So, there won't be too many young Australian women begging for his hand in marriage.

Well yes I did notice an awkward moment when he bent low to clamber in to a car, and there was the bald spot, bouncing off light like a hot spot from a key light. How unfair, how unreasonable, how indecent, to judge a man by his bald spot. But he did look an awful lot like Prince Chuck. Younger, but you could see where he was heading. The genes will out, they say, and since breeding is all the Windsors have got, breeding will have its say.
Worse still, the dear boy has declared a media black out in the antipodes, unlike the garrulous Chuck, who will talk to a tree stump about the damage being done to the environment, and to tree stumps. But the Weekly isn't piqued, just uninterested because of the lack of sparkle.

What consternating news. What should Prince Willy have done to woo the Weekly?
Australia probably will move to sever its ties with the monarchy one day, but that was not the overriding consideration for the Weekly's treatment.

The truth is this visit would have been very different if it had one key ingredient: Middleton. There is nothing like the prospect of a glamorous, rich and young would-be princess to add some sparkle.

Yep, he should have brung the squeeze. No moll, no poll. No guurl, no media whirl. And there's that word sparkle again.
Is she another Diana? Probably not, but the pictures would have been beautiful and the story of a new princess too compelling to avoid.

So, while there won't be a lot of Prince William's January 2010 visit to Australia, I predict that in the event of an engagement, or marriage, the cover of The Weekly will be all his (and hers).

Oh god, he's got to get hitched to make the Weekly. No diamond, no rock, no ring, no sparkle.
Well that news puts Paul Colgan's Will could save the monarchy in its place. The Irish git spends an inordinate amount of time advising that he intends to sign up for Australian citizenship, and that he now sees a bonus in becoming a subject of the British monarchy, which is modern and reformist, and even responded appropriately to Diana's death in the end, but not before providing rich pickings for Stephen Frears' delicious The Queen.

It’s easy to see Charles, if he’s crowned, being Australia’s last monarch. But a fresh and hip yet still dignified King William? There, so to speak, is a ruler you could line up with.

I’d hope to have a vote in any future referendum on an Australian republic, and while as an Irishman I have a long and sorry list of reasons to kick the Windsors, as long William is a close prospect for the throne you can stick me down as undecided.
What a goose. Clearly, being Irish, he knows nothing about sparkle.
But it gets worse over at the SMH where George Williams gets terribly agitated in Past time to cut ties with the monarchy.
Prince William's arrival yesterday reminds us of our constitutional future. After his father, he will be our king. William will ascend to the pinnacle of our democracy not on the basis of his fitness for office or by winning the support of the people, but due solely to the good fortune of his birth.

The idea that someone should be born into the highest position in Australian Government is more than quaint; it is objectionable. It is inconsistent with what is otherwise a democratic and egalitarian system.
Oh to be sure, all George's points are interesting and valid. The way the 1701 succession statue discriminates against Roman Catholics (shocking, we love the Pellist heresy on loon pond), and the way Australia's constitution demands no religious test for any office, but the crown is the defender of the faith, and the way the clutching at straws monarchists have clutched at the desperate conceit of calling Australia a "crowned republic", so they can keep dribbling over royalty, as if a republic would stop them dribbling over royalty wherever they might find it, and so on ... and then a resounding call to arms:
Having Prince William as our future king represents a failure, not on his part, but of ourselves.

We have yet to assert our full powers of self-government by bringing about a sound and stable republican structure of government that better represents our aspirations and values. The power to cut Australia's ties to the monarchy and its ancient inequities lies solely within our hands. It is past time that we exercised it.
George, you've got it all wrong. Listen to the Weekly. They know, they feel it in their bones.
If you'd just said no man with a bald spot should become King of Australia, you'd be on much safer and surer ground. If you'd argued that no man with the personality of Prince Charles - which we're told by the Weekly now embraces Prince Willy's earnest personality - should become King of Australia, you'd have had a lay down misere.
Who else could they turn to with the top contenders ruled out, put out to pasture? Prince Harry the party down dude?
George, if you'd just ended with a resounding flourish, you could have made your point and swept public opinion to your side. How's this for a re-write?
Having Prince William as our future king represents a failure, a lack of interest in sparkle, not on his part, because after all a lack of sparkle is in his breeding, but of ourselves, because we should be demanding sparkle and hair and personality in our future monarch, and the Windsors no longer cut it.
Baldies can't rule - just ask George in Seinfeld about his difficulties. How else to explain the suffering of men, and their sharking by quacks and herbalists and faith healers? Unless of course Prince Willy could do the full monty, and become like Yul Brynner as the King of Siam in The King and I. Now there was a hunk, who understood no hair could be a great selling point. No comb overs for him. Perhaps the monarchists could take a stand that way ...
But as for loon pond, from this day forward, we intend to campaign for an amendment to the 1701 statue whereby a balding prince will be "for ever incapable to inherit, possess, or enjoy the Crown." Only the hairsuite (oh okay, devotees of hirsutism) or holders of a fully fledged, no comb over androgenic alopecia card can reign supreme.
Unless of course Prince Willy can demonstrate he has sparkle via his squeeze, say Grace Kelly or a charming lass from Tasmania whom he might meet over a romantic drink or three at the Slip Inn , if he wasn't being so dull in a very dull Prince Chuck way!
Forward Republicans, like Samson, the secret weakness is the hair. The Weekly told me so, and whatever they say still goes in this land of deluded constitutionalists and Irish columnists ...
(Below: the Daily Mail was onto the crucial Republican issue way back in 2007, here, as Prince Willy showed he was a chip off the old Prince Chuck block with "the curse of the Windsors"). 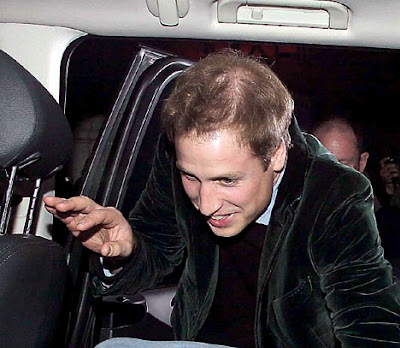 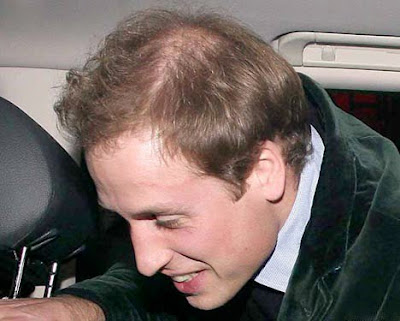