The pond goes populist with Gina, Pete and Dame Slap ... 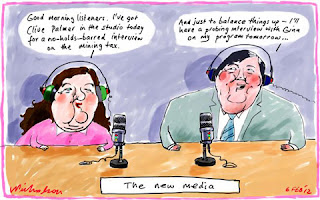 (Above: more Nicholson here).
The excellent news for the Ten network is that Everybody Dance Now struggled to reach a totally dire 304,000 viewers. (mUmBRELLA).
It made Ita Buttrose's excellent proposal for Fairfax even more compelling, as explained in Crikey's Ita Buttrose to Fairfax: put Gina Rinehart on the board. (inside the paywall, where it should stay)
Yes, put Gina on the board of Fairfax, because Ten is doing so spiffingly well, and everybody is mean to poor Gina and she'd make such a difference, she's so media savvy.
It's grand to see Crikey joining in with Ita to support a much abused, hapless billionaire.
Unfortunately Buttrose didn't come up with a masterstroke move to support the need for Gina to take charge of Fairfax, so here's the pond's suggestion.
She could replace Paul Sheehan with Sarah Murdoch. There'll be no talk of nepotism, and it could be the first step in a grand alliance which would see all newsprint in the shadow of the Murdochs.
And it would stop the level of snidery to be found in a story like Axe hovers over dance show after soft debut:
Pity the person who has to tell Ten's chairman Lachlan Murdoch that his wife's show is a flop.

Pity the person who has to tell Gina Rinehart that during her stint on the board Ten has become a relentless flop machine.
Maybe Puberty Blues will pull it out of its current death dive, but you have to get to that version of the shire via The Shire.
Wouldn't the offer of a free lobotomy to the frontal lobe be more attractive?
Now for a little nostalgia:

Happily Fairfax still goes about the business of publishing the sideline thoughts of the irrelevant, while the real world heedlessly marches on, and who better to lead the way than wacky, zany Peter "the smirk" Costello, who discovers today that the coalition is full of wacky, zany people with wacky, zany ideas (and one of them is even called "Wacka").
You could read it all in Coalition must beware wacky ideas on foreign investment, or you could take that offer of a free lobotomy.
It's always fun to see the pompous and the irrelevant do an "in my day, young pups" routine, in this case Costello yearning for the good old days when he spoke sternly to Shell about Woodside.
The smirk attempts to dampen down rabid rural speculation about the Chinese buying up land and perhaps landing in Darwin by Friday (tell the world Barners, warn the world), and chides National Party Senator John "Wacka" Williams for proposing that the ombudsman be given power to force supermarkets to increase prices. You know, good old Soviet-style advanced economic thinking. (Wacky Wacka went hard at it in Nationals senator calls for a small business and farming ombudsman).
The result? The peculiar sight of Costello chiding the coalition for populism:
The Coalition has committed to a ''root and branch'' review of competition policy. This will be another showdown between rational economics and rural populism.

The elephant in the room is that Tony Abbott has led a shamelessly populist strategy for years, full of snake oil pitches on all kinds of subjects, with wild-cat Nationals and crazy-eyed Liberals peddling their pet nostrums, with every so often - as when Malcolm Turnbull noted the truth in relation to electricity prices - someone catching up with the shadow emperor's clothes and pointing to Abbott's economic incoherence when required to do anything other than say no.
Costello, master fudger and practiser of the art of avoidance and confrontation - he never did have the ticker - takes out his ire on the Nationals, and the Coalition, but the reality is that this sort of luddite nonsense has been a feature of Abbott's reign.
Will the smirk ever call out the Abbott? In your dreams. He couldn't call out John Howard, and you know what they say about smirking Cheshire cats ...
Meanwhile, Janet "Dame Slap" Albrechtsen has discovered that the Olympics are tarnished, as she explains at length in Old ruling gods of Mount Olympus should make way for the new. (inside the Oz paywall).
She has her eye on John Coates and Kevan Gosper, and the perks and the junkets, and the gravy train, and the sleek limos and the cocktails.
Why she starts to sound like a Bolshevik leading the charge against the Tsar, all the more so when she discovers that Juan Antonio Samaranch was a follower of Franco and a Falangist (here's Andrew Jennings explaining it back in 2008, and here's one of the tasty photos he provides, with Samaranch fourth from the right giving the salute): 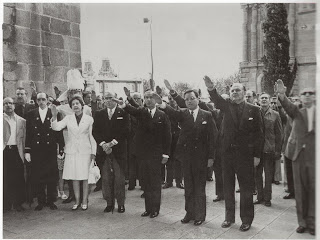 But, but, but, dictators do good, and look how Spain has become an unruly democratic mess since Franco left the stage.
Ah well, the world will just have to settle for Dame Slap becoming a strident democrat seeking to overturn the corruption of the Olympic movement by the magic strategy of shortening terms:
...the gravy train must come to a stop at an earlier station for all IOC members. It's time for new rules so that the IOC conductors, ticket collectors and other perk-laden IOC administrators get a shorter ride.
Uh huh. So you can still score all the perks, just on a shorter train trip. Make sure you slurp down that cocktail before you reach the station.
Now if Dame Slap had called for a reduction in funding for the Olympics in Australia, designed to remove an unhealthy national obsession with scoring gold medals (with gold the only measure for status and standing), she might have been taken seriously.
Even Paul Sheehan understands that when it comes to maintaining gold, the East German model must have its limits, though he somehow manages to confuse his own leg and mind cramps with the law of diminishing returns in Obsession with gold not worth the pain.
The point, as even Chris Berg understands, is that crypto-fascism is at the heart of the staging of the Olympics - the torch relay was a touch added by the Nazis for Berlin in 1936 - and if Coates and Gosper are replaced by similar lobbyists, things will stay the same, and all this talk of gold medals as a guide to mental national health will continue unabated.
Oh wait, was it only last week that Dame Slap proposed that No, Olympic silver is not the new gold (inside the Oz paywall, thank the absent lord for that).
Yes, only last week Dame Slap was sounding just like John and Kevan, sounding off about a nation humiliated by an accumulation of silver rather than gold:
... if we do hand out medals for second and third place, do we assume that the winners of those medals ought to show grace in what is, after all, a defeat. Silver is not the new gold. Not even for a nation now struggling in the gold medal count after a proud history of success.
You want coherence and consistency in the commentariat?
Sorry, not when populism is all the go.
(Below: speaking of populism, can the pond benefit from a Sarah Murdoch bump, in the way it achieved enormous success with the Bingle bump? And in other key questions, should the pond fight the tape, and what's a dead cat bounce?) 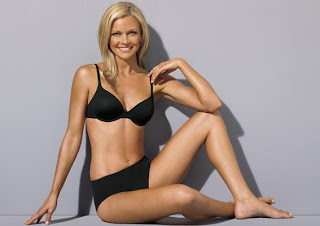