In which the saga of the witches' brew turns into a proxy war ... 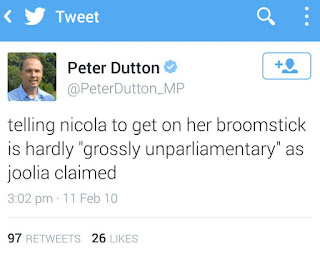 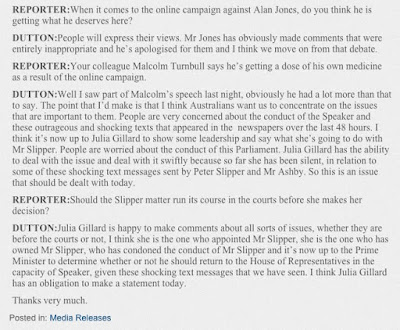 The pond is in to historical irony as much as the next person, and thanks to twitter, the links and the ironical jibes keep flowing, as per the mutton Dutton's press release still online here ...

But after reading Andrew Cockburn's A special relationship The United States is teaming up with Al Qaeda, again (inside Harper's paywall, but it can be found here), the pond was also reminded of proxy wars and how to conduct them, and how to get entangled in a centuries old Islamic civil war, which has once again burst out into the open, as the appalling Wahhabist regime of Saudi Arabia goes full tilt against the appalling theocratic regime of Iran. Only fools would choose sides in this one, and the United States and its deputy sheriff down under have regularly played the fool ...

But back to the proxy war being conducted by the reptiles of Oz this morning. The headline splashes in the Terror and the lizard of Oz suggest that Briggs has now become a proxy for the reptiles' war on Malware ... 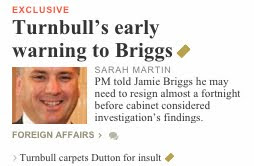 This helps explain the peculiar, verging on bizarre distortions, contortions and carry-on in the reptile editorial this morning, because the dear things are still getting agitated about the question of process ...

Now the average person might think Briggs was a dunce who got on the piss and made a fool of himself, and paid the price. Move on people, nothing to see here, we need to focus on wrecking Gonski and ruining the NBN ... 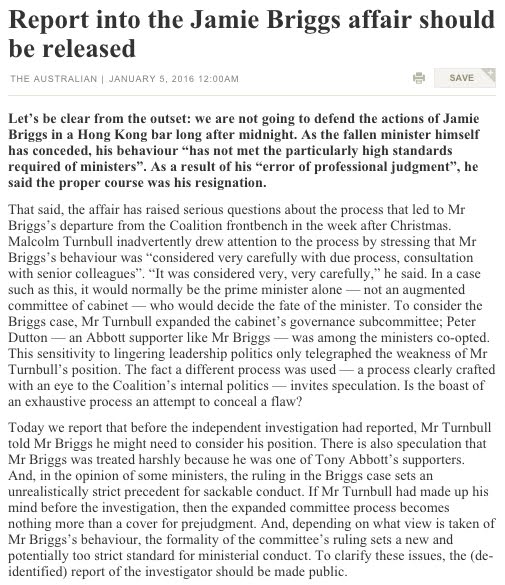 Let's be clear from the outset. The reptiles of Oz want to nail Turnbull, and justify the hares they themselves set running on the weekend, wherein they tried to lather up a case that Briggs had been harshly treated - and trotted out the dog botherer to make the case.

Calling for the release of the report is merely a way to make more mischief, a new front on the eternal proxy war designed to give Malware a hard time.

As a result, this most peculiar editorial has to spend as much time trashing Briggs as making absurdly paranoid suggestions about the process by which he was judged and sacked. Yep, the reptiles are still banging on about the matter being "borderline", "whether or not it was a sackable offence", yadda yadda, yahoo, haroo yaroop garooah, and today they've wheeled out another lackey, one Jennifer "Oreo" Oriel, to maintain the crusade ...

Why do they bother with defending the indefensible, and blathering on about developing professional behaviour guidelines related explicitly to the law, as if this would sort out the ethics, hypocrisies, ironies and behavioural problems of politics ... as if say, getting a Justice Heydon to rule on political behaviour would be judged a way to sort things? (Oh okay, we only flung that in so we could link to Richard Ackland's joyously Latinate The only surprise in Heydon's trade union report is its lack of rhetorical flourish).

Well partly it's a defence of the reptiles' own reprehensible behaviour, as they went about their business of fortifying the conservatives in the government.

Of course what you won't get in the Oz is this sort of headline ... 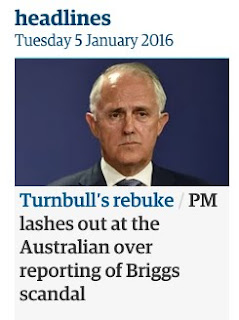 Nope, you have to go to the Graudian here for that one ...

The Australian newspaper published a front-page pixelated photo on the weekend of the woman and Briggs’ chief of staff at the bar, as well as her age and position in the public service.
The prime minister has criticised the newspaper and Coalition members involved in the leaking of the photo, warning their behaviour could deter other women from coming forward with complaints of inappropriate behaviour.
“From the outset I have sought to ensure the privacy of the public servant concerned has been protected,” he said in a statement released late on Monday.
“Publishing the identity of a complainant in a case like this not only infringes their privacy, it serves actively to discourage other women who are concerned about the conduct of a superior from raising a complaint in the future.
“I urge all parties to respect the public servant’s privacy.”

Of course that was back when the reptiles were defending another Abbott dinosaur, or is that a bar fly?

The result is, in its own small way, a proxy war - about the only thing missing from current reptile coverage of the Briggs matter is the chance to drag that public servant fully out into the public eye, and humiliate her in best, classic, Newscorp way ... for tearing down a minister they themselves admit was a useless lump, but dear to the reptile heart, because he was a useless Tony Abbott-supporting lump.

Note well the illustration, which provides a mocking indictment of the obscured face of the devious hussy who caused all the fuss in the first place, no doubt as a result of her piercing eyes, or is that her beautiful eyes? 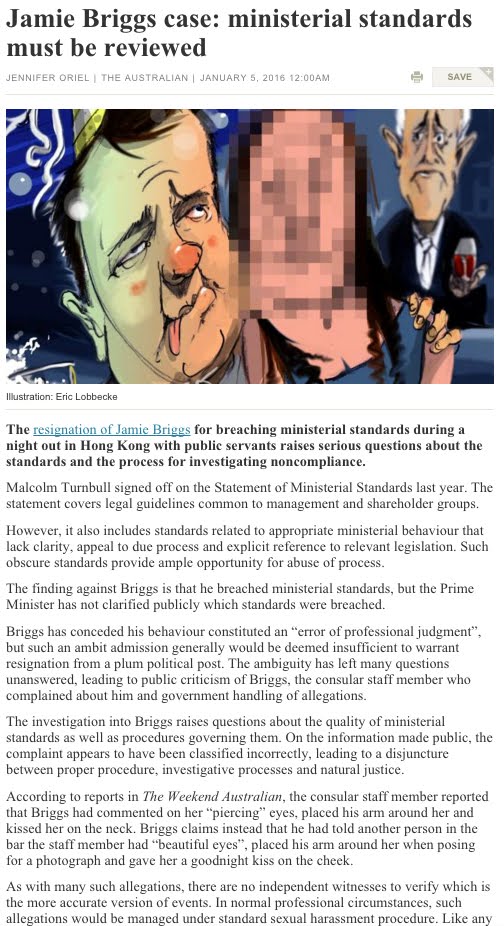 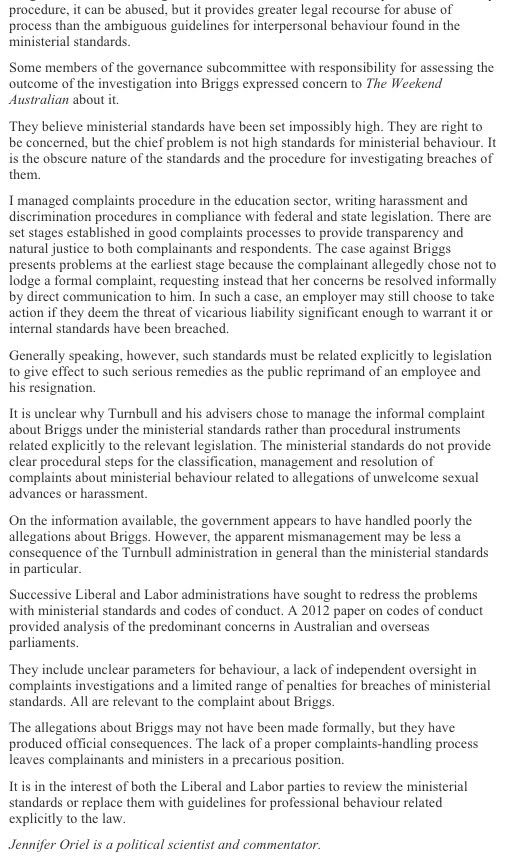 It is of course a nonsense - as if political behaviour could be correlated with academic or public service procedures, as opposed to the common sense notion that it might not be wise for a minister to get on the piss and gawk at a young woman, especially a minister married and with kids, and that it might be wise for hypocritical oafs like the mutton Dutton to install a thumb-defeating device on their text messaging device of choice ...

But that's the point behind all this humbug and nonsense. It's not to set out effective solutions, it's to maintain that proxy war, and keep the heat on Malware, and to keep suggesting that somehow, the government has handled the Briggs matter poorly, as opposed to the peculiar notion that Briggs himself might have triggered the witches' brew in which he's found himself ... fresh after his routine at Abbott's farewell party ...

Well if anyone has made it to this point, they're in urgent need of a reward, and speaking of witches and toil and trouble and hubble bubble, what joy that both Pope and Rowe have returned and are in their usual impeccable form.

You can find more Pope here, and more properly formatted Rowe at his twitter account here, as the pond continues to rage against the display method deployed at the AFR gallery, which ruins Rowe's carefully organised symmetry ... watch out for the monkey and the newt ... 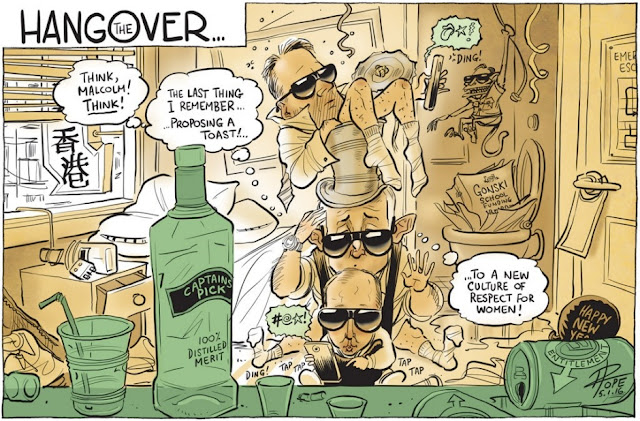 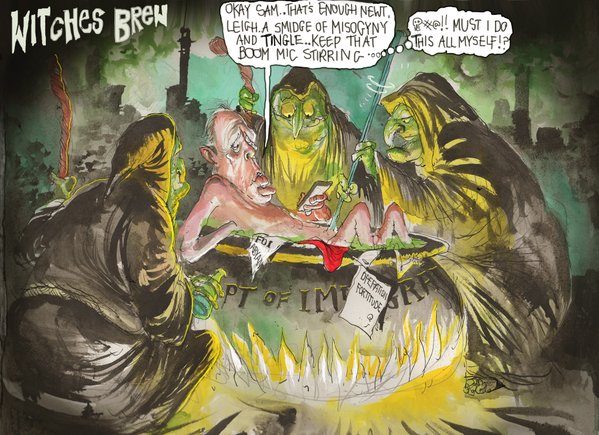