All settled, done and dusted, don't you worry your agile, innovative head about it ...

The pond was out and about this day, and each moment of the walk repeated the mantra that the current record-breaking weather has absolutely nothing to do with that other matter of the climate ...

Besides, the science is in, basic research is no longer needed (Australia cuts 110 climate scientist jobs), the tech is crunched, the disruption done, and everything is sorted, and let's face it, anyone who says otherwise is probably a religious nut job, at least if you trust Larry Marshall and CSIRO chief says row over climate science cuts 'more like religion than science.'

Now please don't get the pond wrong. It's all in favour of Silicon Valley entrepreneurs. How else would we get upgrades that comprehensively fuck up and so create work for people as they urgently rush out a patch?

How else would we get TV sitcoms that show us all how to pivot in an agile, innovative way?

But something niggled in the pond's mind about the science being sorted and settled. And it wasn't just back in the dim distant days of the wall puncher and the sounds of guitar and banjo:

Prime Minister Tony Abbott was in Hobart to give the keynote address at the Liberal Party State Council this weekend in Hobart, and has announced a $24 million co-investment fund for Tasmania. At the meeting, the party's Huon branch has declared climate change is a furphy and green propaganda, but other members have been speaking against the motion.
The Huon branch wants the Australian Government to focus on adapting to climate change "should it occur", rather than reducing carbon emissions.
It also wants the CSIRO to "refrain from promoting climate change as an ideological position rather than as a scientific hypothesis".
After fierce debate, a majority of delegates endorsed a toned down version which deleted the reference to the CSIRO, but maintained the Government should abandon attempts to reduce its carbon emissions. (ABC here).

Nope, there were plenty of others who thought it was all unsorted and unsettled, and the guitar and the banjo were humming in the pond's home state:

The NSW Liberals have formally called on the Turnbull government to conduct public debates about climate change - including whether the science is settled - in a stark reminder of the deep divisions within the party over the issue.
A motion passed at the party's state council calls on the government to "arrange and hold public debates/discussions" between scientists from the Intergovernmental Panel on Climate Change and "independent climate scientists".
The motion says the events should cover "the global warming/climate change debate"; "the claims by the IPCC"; and the statement "is all the science settled".
It proposes the first debate be held in Sydney, the second in Melbourne and "the others to take place one in each state"...
...Fairfax Media understands the motion passed with support of more than 70 per cent of delegates at the state council meeting held on the Central Coast last weekend.
A second motion called on the Turnbull government to hold an inquiry into Australia's engagement with the United Nations on climate change and report back to the party by mid-year.
Sources say Mr Turnbull - known to strongly support action on climate change - was heckled by sections of the party during his speech and a large section of delegates refused to rise when he was given a standing ovation. (Fairfax here).

But it turned out that this was just an appetiser to a story the pond noticed in The Canberra Times, here.

It wasn't written by little Timmeh, or the Bolter or Jo Nova, or Monty Python for that matter, but it had the same intrinsic absurdity.

CSIRO is considering outsourcing climate modelling work to Britain - a step a senior executive conceded would reduce Australia's strengths in the field.
Grilled by Labor and Greens senators at a Senate inquiry in Hobart over cuts to up to half its climate research workforce, CSIRO executive Alex Wonhas said the organisation was considering contracting some work to counterparts in the British Met Office.
"I don't think that I can credibly claim that everything [we are doing now] will continue," Dr Wonhas said. "There will be a reduction in our activity."
It is understood CSIRO executives hope signing a contract with leaders in international climate change research at the Met Office will blunt international criticism of its climate research cuts.
That criticism included a New York Times editorial on Friday (Australia Turns Its Back on Climate Science), which described the cuts as based on "a deplorable misunderstanding of the importance of basic research into what is arguably the greatest challenge facing the planet".

Dudes, dudettes, why on earth would you need to get involved with the Met? It's all sorted and settled.

A CSIRO spokesman said the organisation was looking to deepen its existing collaboration with the Met Office, rather than outsourcing work.
"It is part of consultation and discussions with stakeholders about how research in the climate area can be maintained and maximised in the future," he said.

It's part of the bureaucratic bullshit of all care and no responsibility...

Why didn't you say that in the first place? The pond would have understood.

In a sometimes testy exchange at the Senate inquiry, Dr Wonhas revealed agency officials had used private email addresses, outside the the CSIRO server, to discuss plans to cut climate and other programs ahead of the announcement.
The CSIRO spokesman later explained: "There was concern that distress may be caused to staff if options for staff reduction, which are not yet finalised, were leaked or distributed."
Opposition industry spokesman Kim Carr described the evidence of the CSIRO executives who appeared before the committee - Dr Wonhas, who oversees environment, energy and resources, and chief financial officer Hazel Bennett - as startling.
"It's extremely concerning that senior executives think they could increase the security of documents about the latest round of cuts by directing staff to use personal emails," he said. "The motive might have been innocent, but it is just incredibly inappropriate and potentially a breach of the law."

Damn right it's startling. The head of the CSIRO speaks with expert authority on what constitutes religious fervour, yet doesn't have the first fucking clue what's been used to hammer Hillary Clinton for months?

Now don't get the pond wrong, we need Silicon Valley entrepreneurs to be agile, innovative and entrepreneurial ...

After all, when Earth 1.0 fucks up, all we need to do is release an upgraded 2.1 version, and that'll take care of the bugs ...

And probably the humans and the dinosaur bones too ...

Just let it be remembered that this is now all happening on Malcolm Turnbull's watch, the man whom the Greens won't rule in or out, in much the same way as the Lib Dems went to electoral hell when they facilitated the Tories...

All this as Malware keeps saying he he accepts the science, but then Malware is known for his love of copper.

Time to drag out an old First Dog the pond knew would come in handy, and for the rest of the doggy do awards head off here ... 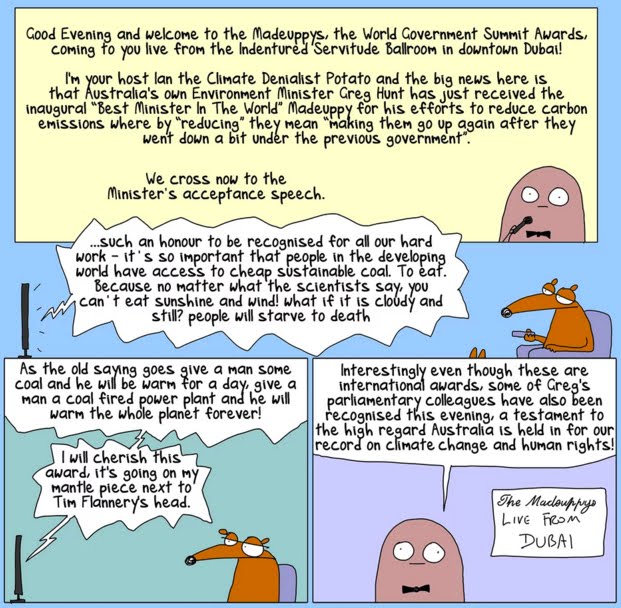