The smack-down heard around the world ... 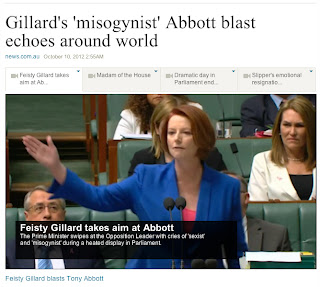 (Above: link here, to the lizard Oz version of the story, the sam as the HUN below, outside the paywall).


Before we get down to the daily grind of fetid federal business, please allow the pond to re-visit an incisive piece by Garry Glazebrook, under the header With Broad and Greiner driving us, chaos is just around the corner.

It will only matter to Sydney-siders, but as William Blake used to say, in a grain of sand lurks a universe of stars.

It's a couple of days old now, but Glazebrook rips into the so-called Infrastructure NSW plan in a way that is both incisive and insightful.

He doesn't even get around to mentioning the plan to turn Parramatta Road into an open cut sewer for cars, or Bazza O'Farrell's deluded notion that Sydney should base its second airport in Canberra, or the way the new plan tries to ease the congestion already apparent around Botany Bay and the airport, without once considering whether a second airport closer than Canberra might help, but it'll do.

What would John Bradfield make of all this? One suspects he would roll in his grave.

And now to the tedious business of the day which happily will take us away from the Australian media.

There are any number of explanations as to why Tony Abbott induced a firestorm by talking of dying of shame.

He's as thick as a brick, he's socially graceless with a memory as short as gnat, he's sub-consciously mimetic and he'll regurgitate any phrase that stuck in Broca's area of the brain in the last week (and regurgitate it at awkward moments like someone caught in Tourette's syndrome, making him immensely interesting for any Freudian in the audience), or he's deeply, consciously cynical and shameless.

Not that it matters to the pond much, but there he was sniggering and smirking away, ostentatiously displaying a gentility about female body parts (ditching his attitude to witches), and with an easy target to hand in the form of a Slipper, and yet ... the boofhead boot slipped.

Who knows how or why he he over-cranked, but it surely is entertaining and it led to a splendid return of fire heard around the world.

Sure he got his man, but he also got a verbal whipping. Hand the man an iron ...

You won't find much of this in the local media, still ready to put the boot into King Rat, a man caught out by private messaging (irony alert anyone, for all the defensive blather about how Alan Jones was caught out being a boofhead in allegedly private surroundings in a public event).

But a few local rags have come up for air, as in the HUN's Gillard's 'misogynist' Abbott blast echoes around the world. (it's okay, it's outside the failing, flailing paywall - who'd have thought a tabloid paywall would deliver manna from heaven?)

Note that Morrissey doesn't mince words. She's not talking about ripping a new one for a possible or an alleged Misogynist, she's talking about an actual misogynist, and she had no doubt that the line about dying of shame was an actual dig at Gillard, an act of flame-throwing incitement.

The Daily Terror, UK version, provided the video under the header Gillard's blistering attack on sexism was her best (you have to suffer a geo-targeted ad to get to it, damn you geo-targeting Woolies, damn you to hell).

The Guardian anointed it the top video of the day, under the header Australia's PM Gillard lambasts 'misogynist' opponent - video: 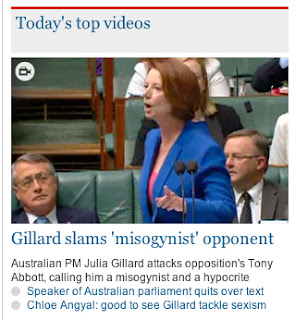 And Chloe Angyal backed it up with a column, under the header It's good to see Julia Gillard tackle sexism head-on.

And how to tackle sexistm head-on? Why by letting rip at that sexist opposition leader Tony Abbott.

Gillard usually sidesteps discussions of gender politics, a modus operandi for many women in power in traditionally masculine environments. This was some long overdue brazenness on her part, no doubt prompted in part by last week's portrayal of Abbott as a "feminist". And yes, it's quite something to see the most powerful woman in the country say what so many of us have been thinking, pulling no punches as she does so.

Angyal concludes by noting how Gillard does her rhetoric a disservice by her opposition to gay marriage, while on the domestic front, the theme has been how she made a wrong call by not sacking Slipper - that is to say, joining in and endorsing and participating in Abbott's usual feral parliamentary assault.

But how satisfying it is to see this shot travel around the world, and despite all the nonsense blathered by Margie Abbott in recent times:

Gillard went on to list a series of sexist and misogynistic remarks made by Abbott himself – from questioning whether it's a bad thing that men have more power than women to explaining a new carbon pricing scheme with the words "what the housewives of Australia need to understand as they do the ironing …". Gillard remarked sarcastically: "Thank you for that painting of women's roles in modern Australia."

And at last Gillard delivered payback for those Ditch the witch and Bob Brown's Bitch signs, which as accompanying footage showed, Abbott would have been blind not to see.

Why even a seeing eye dog would have been able to tell him what was to the front, left, right and centre, and behind him.

In search of a suitable sexist metaphor, the pond could only think back to the days when father would return from the pub, well oiled and with a smirk of guilt and a smile on lips, ripe to cop a shellacking and a deliberately burnt roast. Talk about smack-downs, a regular part of the domestic landscape, replete with father looking at his watch because a woman had talked for too long.

Yep, there was Abbott smirking and rolling his eyes, and guilty as hell, watch on wrist - just a quick look, how long must I endure this epic smack-down - but of course it was parliamentary proceedings, not a domestic. Or is parliament just a series of domestics on a grand scale? Not really:

This morning I woke up to an email that said: "Wow, looks like your prime minister fired her anger translator," with a link to this video of Australian PM Julia Gillard's masterful, righteous take-down of opposition leader Tony Abbott.

And it was masterful and righteous, the best thing Gillard has done in response to Abbott's incessant goading and prodding. Would there was more of it. Better to die fighting on your feet than suffer in silence on your knees.

That doesn't stop Gillard from being a dead PM walking, or if you will, a dead duck walking. (Murdoch press, feel free to translate this as dead duck waddling, and pass it on to the Liberal troops in the rear).

The media will hound the government over the Slipper affair, give Abbott a card to pass Go and collect two hundred sexist remarks - that's what you expect of a mainstream media still largely run by aging white men - and it now becomes apparent why the government settled the court action and left Slipper to hang out to dry.

But if anything the numbers will now be enhanced, the parliament will lurch on for its full term, the dust will settle, and Abbott will move on to his next attempt to blow up the castle.

Nothing Gillard can say or do will now alter the way she is portrayed domestically - the die is cast - and soon enough Australia will be led by a sexist misogynist (let's double the load), who will, in policy terms, make Barry O'Farrell seem like a genius (yes a grain of sand can hold a universe of pain).

But what joy to see Abbott stripped of his padding and his protective devices and perceived around the world for what he is.

Angyal knows that you're likely to see sexists in company, squawking together, reassured by their complacent masculine view of the world. Sexists hanging with sexists because it's cool:

Abbott has come under pressure to denounce Jones, but has refused to do so, saying Jones is an old friend. "Yes I get on well with Alan, he's a friend of mine … I've known him for 30 years now," Abbott said, "but he's his own man." Abbott acknowledged that Jones had said the wrong thing (you think?), but urged people to move on.

That's the way it works, a nip at the heels, and then keep the sheep moving along. But let's not move on, let's brood a little about the past.

Imagine, for example, if you will, in a perverse moment, experiencing some reverse sexism. Say a Labor party politician standing next to a sign saying "Ditch that witch Margie Abbott" or one reading "Tony Abbott's bitch".

That's the way it is with sexists. They never expect to experience it in reverse. So let Angyal have the last word:

It's particularly satisfying that Gillard's take-down comes after Abbott's wife, Margie, spent last week telling multiple media outlets that her husband, despite suggestions that he is a sexist, is nothing of the sort. Margie Abbott, who rarely speaks to the press, did a media blitz last week, telling one news programme that "Tony Abbott gets women and … the women in Tony Abbott's life certainly get him." And the experience of having three daughters, she insisted, had made him a feminist."

Feminist? Yes it's particularly satisfying that canard has been put to bed.

Meanwhile, there is a splendid plan in NSW to drive public transport into the ground.

The pond eagerly awaits the sexist misogynist's (let's do a double-barrelled shotgun) grand plans to drive climate science, the NBN, and Malcolm Turnbull into the ground ...

(Below: amen to that, no links, screen cap). 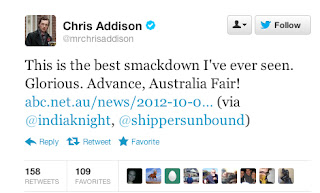