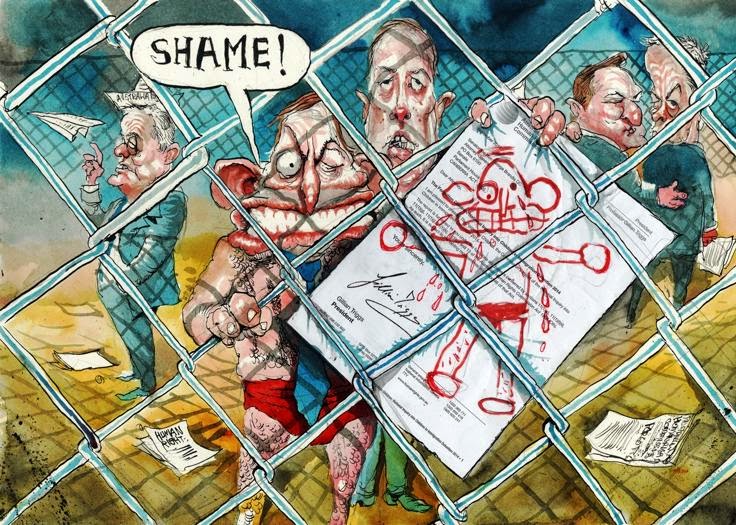 (Above: and more Rowe here).

By the pond's count, yesterday Tony Abbott made a gaffe about the holocaust, and broke all standards in relation to leading evidence on a matter before the courts, in a manner only possible for someone beavering away in coward's castle, which is to say parliament, and therefor exempt from any question of contempt of court.

Now any sort of statement of this kind usually needs to be preceded by some washing of hands - like "the pond has no time for terrorist scum" - which is true enough, but then the pond equally has no time for political scum who seek to subvert the administration of justice.

Only a klutz like Abbott would use a trial to make cheap political points, as part of the ongoing campaign to whip up paranoia and incidentally get the Labor sheep to go along with metadata legislation, and thereby move Australia that much closer to an Orwellian state, entirely at one with a vision of a colonial monarchical outpost.

There were all sorts of legal odd bods popping out of the woodwork to talk about Abbott and his abuse of process, which eerily and unnervingly, sounded like Campbell Newman doing his best (or worst) to get all the lawyers of Queensland offside:

On Thursday the president of the New South Wales bar association, Jane Needham SC, urged restraint in publicly commenting on the case, warning that the men may not receive a fair trial.
“The association has concerns about the degree of public comment in the media concerning the two terrorism suspects appearing today in bail proceedings. Such comments have the potential to undermine the proper administration of justice,” Needham said.
“Our courts should be allowed to deal with matters before them without public statements being made that could prejudice subsequent proceedings and we would urge caution in this regard.” (here in the Graudian).

"To make those sorts of inflammatory utterances is calculated to influence the judicial process and it's being done for a political purpose," he said. (here at the ABC)

And then there was the fuss about Triggs and a report on the detention of children. 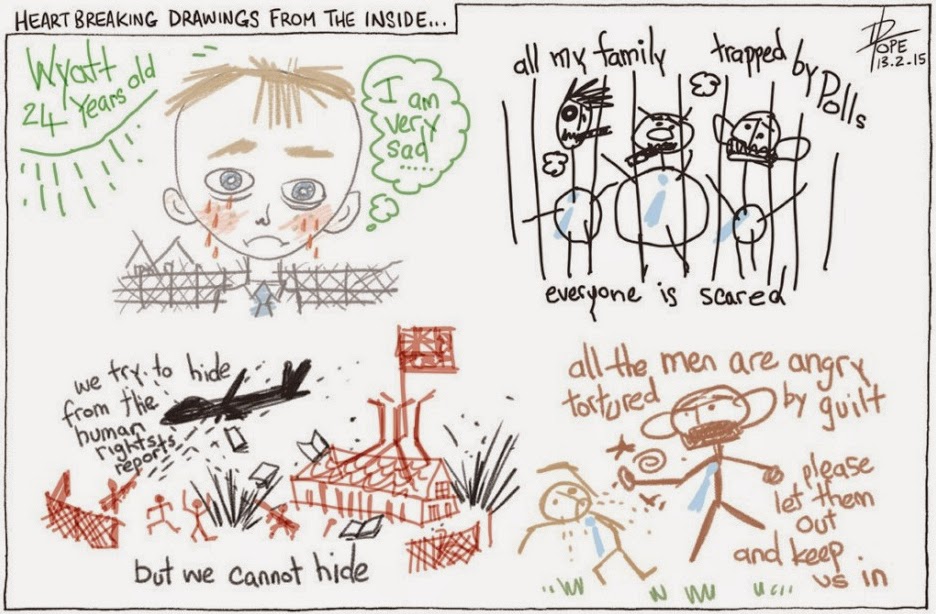 Abbott managed to produce some kickback that same day with an editorial by the Sydney Fairfaxians:

And then The Age followed up today with a front page and an editorial:

That's online here, and naturally the reptiles were on hand to shoot the messenger and demonise the message, and blame it all on the ABC and Fairfax.

This was how the reptiles at the lizard Oz concluded their whole-hearted editorial assault on Triggs:

Yes, Abbott and the reptiles have successfully made a partisan issue out of a matter in which the Labor party is equally guilty ...

That's a unique achievement, but the reptiles let loose the real reason why they were rattled in the earlier part of the editorial:

.... understandably, there is community distress about children in detention.

Not, it seems, if you're an angry boofhead head kicker, with no sense of guilt or shame.

You see, there's now only a couple of hundred kids in detention, so where's the harm. Oh okay, there might be a bit of damage to the couple of hundred, but it's not like it was under Labor.

In the old days, the pond was much puzzled by moral equivalence (Greg Hunt it here):

They ... justify the atrocities of their own side by claiming it to be a lesser evil compared with allowing the evil power to have its own way. These atrocities in this way become acts of good, not evil.

The juxtaposition of attitudes in the lizard Oz reached a quite poignant level:

And the same note was struck on the front page of the lizard Oz, at one moment hand-wringing about executions, while celebrating the boofheads mounting a thuggee attack on Triggs.

Note, in this context, it's important not to comment on the report, or its findings, or what it actually says: 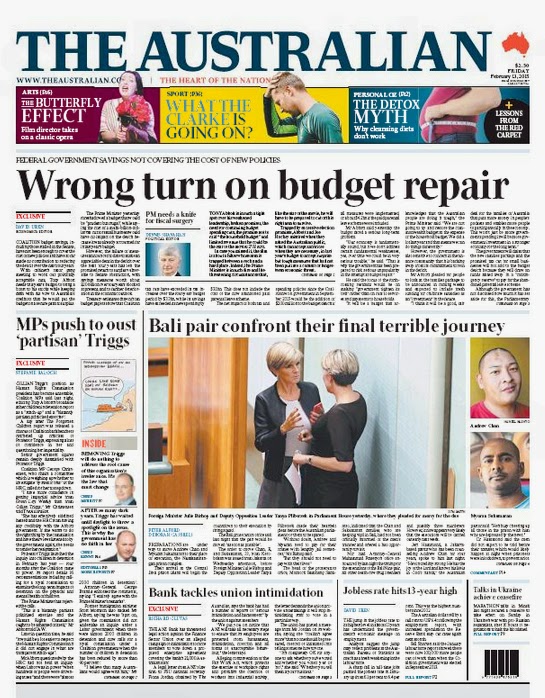 The feral assaults reached their lowest point, the pit of contemptible personal attack, courtesy of Akker Dakker in the Daily Terror: 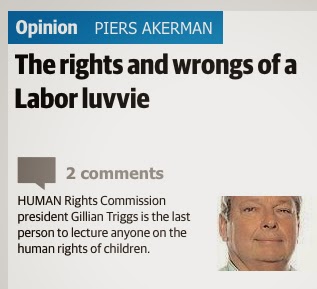 That's pretty much the moral equivalent of a cocaine-using toad lecturing others about the evils of drugs in society ...

In a decent paper, this personal assault on Triggs would have been spiked - it certainly won't be linked to, or amplified or quoted in the pond - but as everyone knows, the Terror routinely lives in the gutter, and Akker Dakker is its king rat.

But okay, what did Abbott achieve yesterday, apart from winning the hearts and minds of neo-Nazis, alienating the lawyers, and contributing to disquiet about children being locked up behind barbed wire?

Well there's plenty of other fish in the seething pond. The Swiss bank account man has a few points to make:

Indeed. No wonder Abbott has kicked that can down the road until the end of the year.

And lovers of irony would love this one:

If it's the economy, stupid, then the stupids really are fucking up the economy ...

Now there's talk of a need for stimulus, so you can take all that rhetoric about budget emergencies, and budget blow-out and the need to rein in expenditure, and stick it in Uncle Joe's bank account ... where it'll earn three fifths of fuck all by way of interest ...

There was an interesting thesis led by Mumbles on all this yesterday: 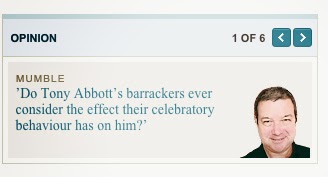 His blog is usually up later in the day at the Oz, and soon enough swept away by the digital horde, but his thesis here was a simple one:

Do Tony Abbott’s media barrackers ever consider the effect their celebratory behaviour since September 2013 may have on the man himself? Might they have contributed to the problems he is now experiencing?
Recall, throughout late 2013 and 2014, the cooing and crowing from Abbott supporters. Those tales of his sure hand, how he flays all-comers and the Left continue to underestimate him. How middle Australia is instinctively attracted to his common sense conservativism.
The fawning over his response to the MH17 atrocity, fuelled in part one suspects by a desperate hope that this would be the issue that turns things around, possibly encouraged him to hold a few press conferences too many and overdo all that “standing up to Putin” shtick.
Look, there’s the Prime Minister jetting around the world dealing with famous people; Labor claimed he wouldn’t be able to do foreign affairs, hahaha.
They egged him on as he fought the good fight against the “Warmists”.
Perhaps most damaging, from the get-go Abbott’s Praetorian Guard cheered him when he broke election commitments, and urged him to trash more.
(With one exception: the deficit levy, their own horror at which the Tribe projected onto the voters, darkly warning of the harm this would cause the government. It turned out to be one of the budget’s more popular measures. See note about speechwriters versus strategists, above.)
But now they write that it turns out he was doing it all wrong all along. There’s this and that, and that and this, it’s been good policy but bad politics, yada yada yada. That chief of staff of his.
Really he shouldn’t have spent so much time overseas in 2014.
Now the columns are full of what he needs to do now if he wants to survive.
But how much opinion-page assistance can one man take?

Yes, it's a delicious irony, but yet, right this very day, when Abbott could have chosen to sound statesmanlike in the matter of children in detention, he came out swinging, taking pot shots at anyone in the vicinity. and standing right next to him were all the usual baying hounds urging him on ...

Meanwhile, the rag that once maintained the rage is now full of dissidents, turn coats and Abbott traitors.

The latest, today, is David Crowe - you can google the rest: 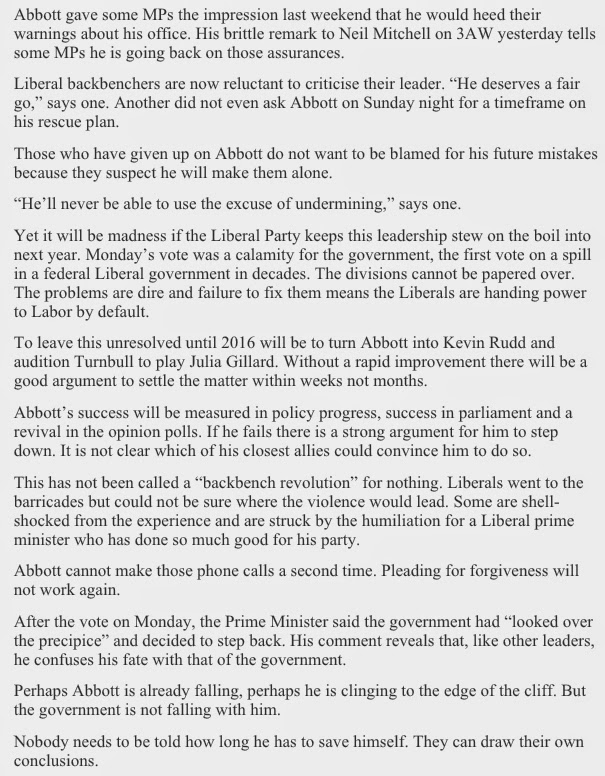 Madness! Settle the matter within weeks!

And then yesterday there was Niki Savva carrying on about Abbott torpedoing himself, and filling her piece with juicy anecdotes of temper tantrums worthy of former Chairman Rudd - you can google the start of the piece: 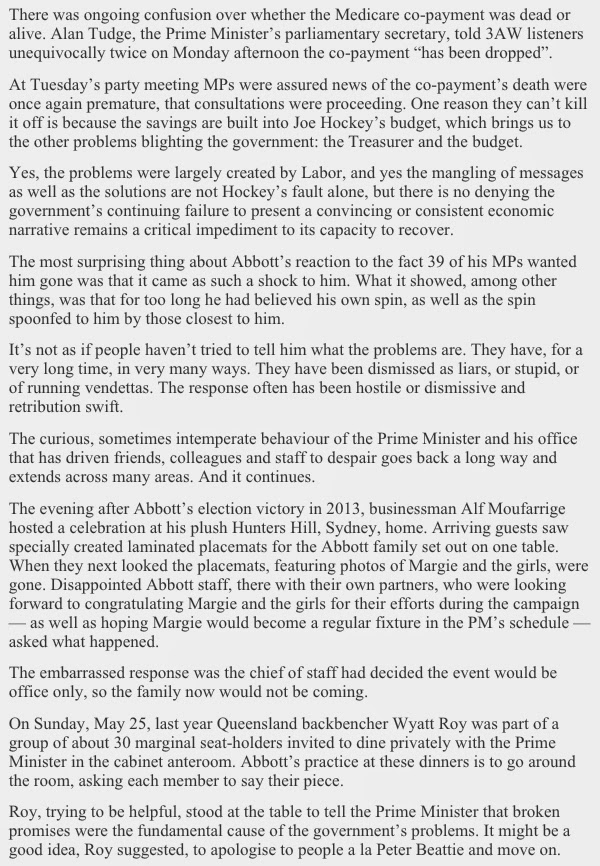 Oh don't stop there Ms Savva, tell us how the Chairman responded.

What did he say to the suggesting Roy making helpful suggestions? 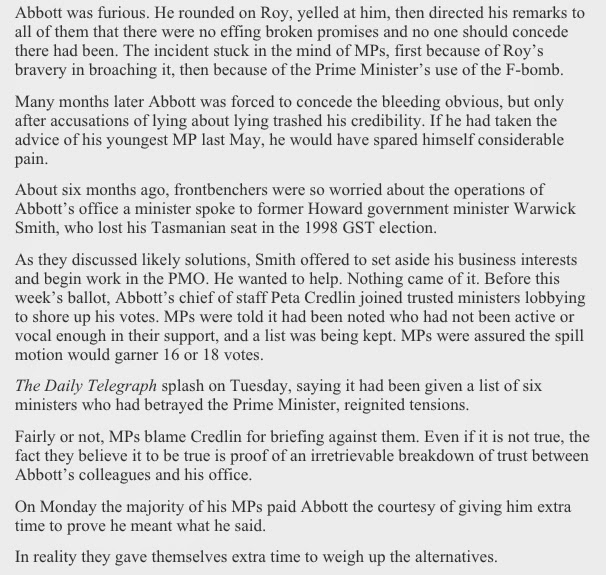 Uh huh. That would be what they call the fucking fuck-bomb up Tamworth way ...

So yesterday, with Abbott under pressure, he performed abysmally. Three acts of stupidity, or at least the three that came to the pond's attention. There might well have been more ...

Well it's the economy, stupid, and the stupids are in charge of the economy, and like Moir - more Moir here - the pond is now in the grip of flying pigs ... 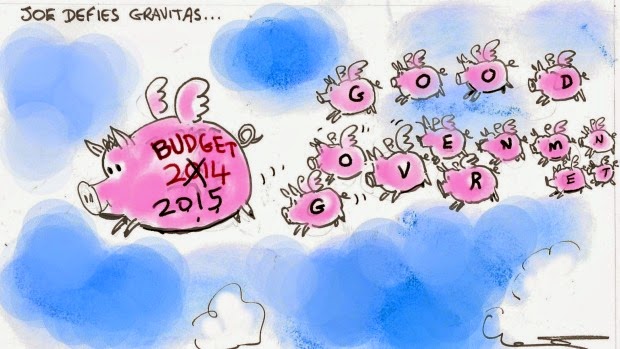 And here's another one, running still, running deep, or as the pond was once taught, altissima quaeque flumins minimo sono labi: 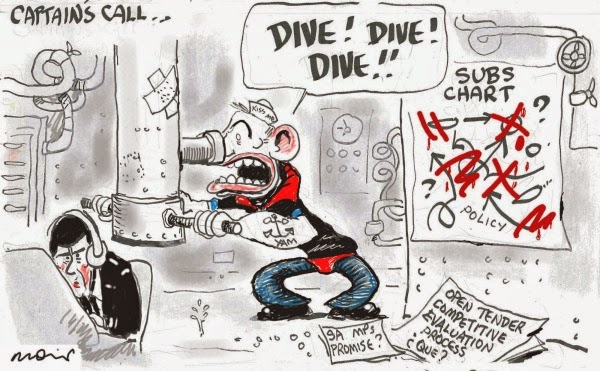