Waiter, some garlic for the spatchcock and tool jokes and don't forget the tin foil hat ... 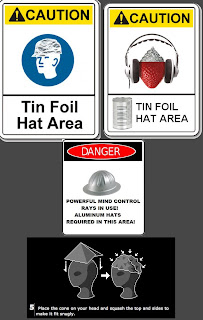 Well that's the poetry out of the way for the day.

Naturally the pond is vastly relieved to learn that the rough Brough is entirely innocent, and the menu that caused the storm is merely the work of Liberal party donors who, having nothing better to do, laboured to produce a menu which would be seen only by themselves, in the cause of a light-hearted joke, a jolly jape amongst chums proving nothing but a wonderful, wondrous Queensland sensa huma ...

Thank the long absent lord. What a tragedy if the rough Brough had been thwarted in his bid to do over another section of Australia, having already done his best to do over the blacks and Peter Slipper. Who knows, since he's a walking disaster zone, he might also do over Tony Abbott in the future ...

And there's another upside to the affair. How pleasing to see Eva Cox join the hounds of the Murdochians as they roam the moors, and what a splendid joke she makes: 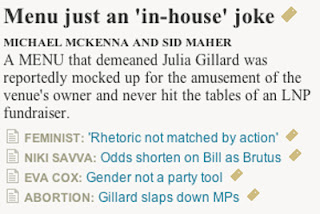 Gender not a party tool?

Was it all the work of a deviant Murdochian subbie having a leg pull?

Nope, a careful scrutiny of Gender not a party tool (behind the paywall so you don't have to feel like a tool) reveals this header bait by Cox:

It also shows how gender as a political tool disrespects the office of the PM.

Why it had the pond sending jaffas down the aisles ... in memory of the tool jokes that did the rounds in that centre of the sexist universe, Tamworth, you blood beaut ...

No doubt people will notice Ms Cox diligently applying her rhetorical tools in Murdoch la la land, and here's hoping she gains a position as resident token feminist in due course ...

Meanwhile, the sanctimonious, righteous Abbott advises that we should all be better than that. 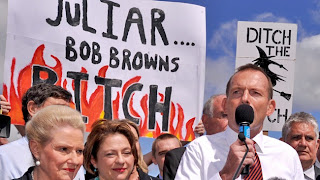 Indeed. The man knows what he talks about. But will he ever do better than that?

Meanwhile, and more importantly, the pond is indebted to Lenore Taylor in The Guardian, down under version, for keeping tabs on Maurice Newman.

Newman, it might be recalled, bobbed up some time ago to get upset about Robin Williams, climate denialism and pedophilia, as you can read in It's OK to link climate denial to pedophilia, ABC tells ex-chairman Maurice Newman, if the paywall doesn't get you, and you can saunter off feeling free and full of wallet or purse.

That header must surely stand as a wonderful example of Murdochian la la land bias - since it didn't summarise the intent or the meaning of the ABC's response to Newman's complaint - but more to the point, inter alia, the story contained this classic Newman whinge:

Mr Newman said he was the first person to admit he was not a scientist and described himself as a human-induced climate change "agnostic". "I considered the report to be defamatory because it went on to discuss me personally and an opinion piece I'd written comparing some in the climate change camp to religious believers," he said. "In lumping me in with despicable flat-earthers, they also, through their introduction, likened people like us to pedophiles and drug-pushers."

Uh huh. Well he's certainly no scientist, but what cheek, in maintaining the notion that climate science is just another branch of religion, that he should label himself an agnostic.

The chairman of Tony Abbott’s proposed business advisory council, Maurice Newman, has called for the renewable energy target (RET) to be scrapped because he believes the scientific evidence for global warming and the economic case for renewable energy no longer stack up.

The killer kicker is embedded right there ...

Newman is going to be Abbott's advisor and in an astonishingly short time he seems to have moved from agnostic to true believer (oh okay, if you believed the guff about being an agnostic, the pond has a second hand Harbour Bridge - we'll even throw in the Opera House and a set of steak knives - to sell you).

“When we look at the experience of Germany, they have not been successful in reducing emissions; when we look at the science it no longer supports the global warming theory and when we look at the health and economic effects of windfarms and the obscene wealth transfer from poor to rich we have to ask: why are we persisting with them? I think it is a crime against the people.”

Roll that one around on your tongue ... when we look at the science, according to this "agnostic", it no longer supports the global warming theory ...

Of course there are thousands of scientists who would say precisely the opposite, and the more they say it, the more the flat earthers buzz around with denialist chatter, and turn their approach to wind farms into some kind of socialist revolution. It's a crime against the people, the people are being oppressed, rise up and support the coal owners ...

As for the actual science on view at which Newman spoke?

As well as health and landscape concerns, members of the Crookwell Landscape Guardians at the meeting were concerned that “electro magnetic electricity” could be transferred from windfarms through the air and the ground, possibly causing failures of farm machinery and the danger of electric shocks from farm bores.

Don't you love it? Landscape guardians?

Watch out, you're standing under a power line ...

Now if we were talking about TV and radio signals but as it happens, we're not, we're talking nonsense ...

It reminded the pond of its dear, long-departed grandmother, who roamed around the house at night, just before bedtime, making sure all the switches were in the "off" position because the electricity might leak out and do all sorts of harm to inhabitants of the house while they peacefully slept (she also did the same for taps, a more useful precaution in relation to water bills).

So here's the problem. While everybody gets agitated about a menu, there's Abbott's proposed chair of his proposed business advisory council roaming the land, creating furphies and whipping up conspiracies, all the while donning sheep's clothing, the better to play the part of a dissembling wolf ...

And renewable energy, which should be judged on sensible grounds, is being subjected to a groundswell of hysteria, and mumbo jumbo, and scientific nonsense.

Here's what Robin Williams said, as you can read in the transcript of the show here:

What if I told you that paedophilia is good for children, or that asbestos is an excellent inhalant for those with asthma? Or that smoking crack is a normal part and a healthy one of teenage life, to be encouraged? You'd rightly find it outrageous. But there have been similar statements coming out of inexpert mouths again and again in recent times, distorting the science. This is what The Economist magazine said last week about the election in America.
Reading: Republican pessimism is more than a PR headache. Put simply, it is hard for a party to win national elections in a country that it seems to dislike. Mr Romney's campaign slogan was 'Believe in America'. But too many on his side believe in a version of America from which displeasing facts or arguments are ruthlessly excluded. Todd Akin did not implode as a Senate candidate because of his stern opposition to abortion even in cases of rape or incest: many Republicans in Congress share those views. His downfall came because in trying to deny that his principles involved a trade-off with compassion for rape victims he came up with the unscientific myth that the bodies of women subjected to rape can shut down a pregnancy.
It was a telling moment of denial, much like the comforting myth that there is no such thing as climate change or, if there is, that humans are not involved. Ensconced in a parallel world of conservative news sources and conservative arguments, all manner of comforting alternative visions of reality surfaced during the 2012 election. Many, like Mr Akin's outburst, involved avoiding having to think about unwelcome things (often basic science or economics).
Robyn Williams: That from The Economist magazine last week. These distortions of science are far from trivial. Our neglect of what may be clear and urgent problems could be catastrophic.

Yes, Newman is so dumb he can't even understand the implications of metaphorical speech, as deployed by Williams in that first par.

And here's the company he's keeping, according to a website reported by Taylor:

“STT thinks that the wind industry is well and truly on the ropes, but our ‘never say die until it’s dead and buried’ attitude means we won’t be happy until there is a garlic-coated crucifix driven through the heart of this rort-ridden scam of the century. Turn up, be loud and take our country back. Let 18 June 2013 be a day the Coalition won’t forget.”

Garlic-coated crucifix! Yep, there's some knock-down scientific imagery for you. And better still?

Coalition senators Chris Back and Ron Boswell and backbencher Craig Kelly are scheduled to attend the rally.

Yes, in a few days, the loons will be on parade, and what will be truly interesting is the way Tony "climate science is crap" Abbott responds to the hysteria.

Second thoughts, it's all too hard. Can we just do a joke about squirrels, or spatchcocks?

Take it away David Pope, and while you're at it, perhaps we could have a joke about aluminium tin foil hats?

(Below: More Pope here. But was there enough garlic in the mix?) 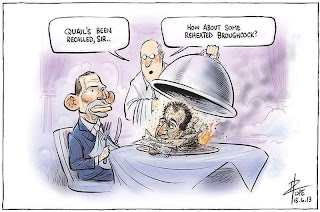