In which the pond shows off its expertise as cat and reptile whisperer ... 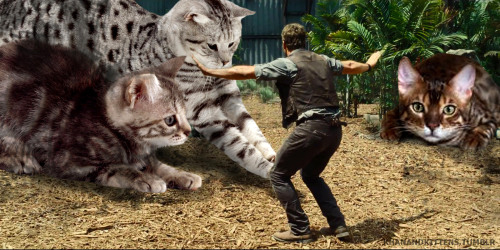 (Above: oh come on this is a serious blog, but we're all allowed a Saturday meme. Found here).

As a skilled cat whisperer - oh the cats and the cowboys and cowgirls the pond has herded over the years, up Tamworth way and beyond - the pond naturally thought that reptile herding would be a piece of cake, a doddle, a walk in the park.

You just can't keep the reptiles down. From the light-hearted to the solemn, they always have a view, but you never know when they're going to turn, break on the flank, and come up with a piece of gibberish that, it turns out, is at the heart of their world view.

Look at the reptiles of Oz. Now it's well known that the reptiles have their hearts set on a little recognition of Aboriginal people in the constitution.

But it must be just like the porridge in that tale of Goldilocks and the bears. Not too hot, not too cold, but just right, or put it another way, certainly not too much, perhaps not too little, but just a little above too little, and so just right ...

They've had their own in-house, pet tame black helping them measure the temperature for years, and their latest outing in today's reptilian editorial finds them in top Goldilocks form.

Now summon up all your remaining strength because this is the reptiles in solemn mode: 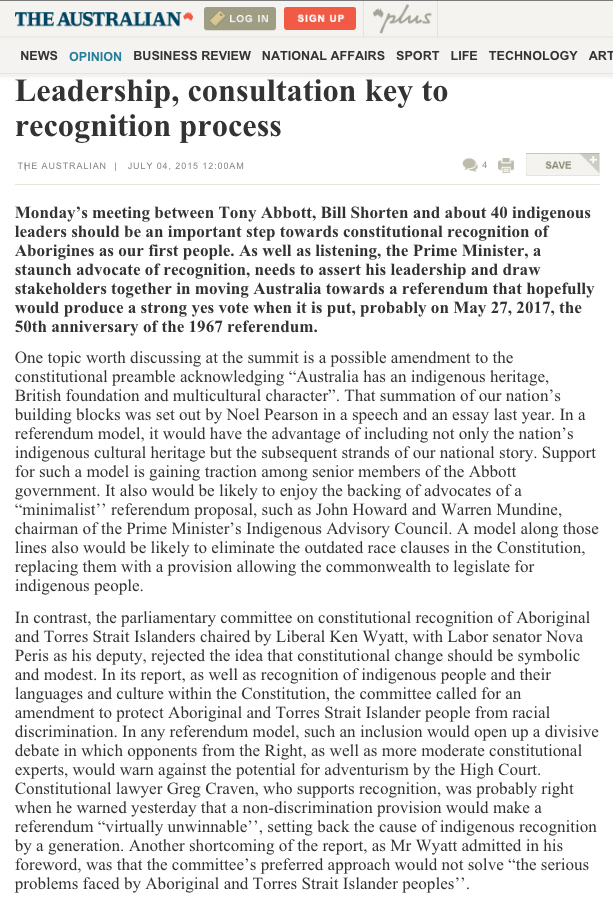 You see, Goldilocks? But not a word about how the reptile approach would solve the serious problems faced by Aboriginal and Torres Strait Islander peoples ... except perhaps by returning to the good old days when governments were very busy legislating for indigenous people, with fabulous consequences and results ... and they're still busy doing it today, with or without changes to the constitution. Anyone for food stamps?

But hey ho, nonny no, on we go and let's see where the reptile musings will get us. Perhaps the perfect bowl of porridge? 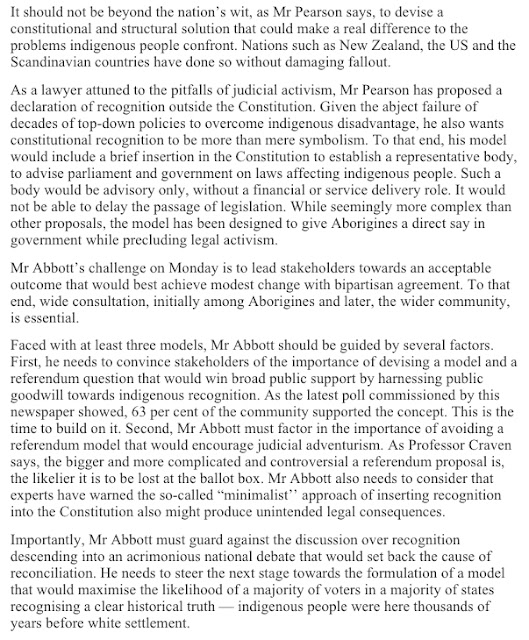 Now let's ignore the fuss surrounding Pearson's model - Patrick Dodson raises concerns over Noel Pearson's model for recognition, What is behind Noel Pearson's change of stance ... etc - or the tragi comedy of the attempt to revive an ATSIC in some form or another, without mentioning that name or it being put to the sword by the Howard government containing one Tony Abbott - Howard puts ATSIC to death - did anyone spot the fatal flaw in the reptilian thinking?

Here it is again:

Abbott, modest change, bipartisan agreement, wide consultation and later wider consultation? Now there's a miracle of conflation, to fit all those words and the name Abbott in the one sentence.

What land does he live in, this modest marvel? Is it the same one as the boofheaded bulldozer flattening everything around him? A man so Islamic Taliban fundamentalist that the thuggee boofheads of rugby league emerge as caring, compassionate and kind people, with a sympathetic and generous capacity to understand others? People just need to get over it, says Rabbitohs star as NRL backs gay marriage.

One thing's guaranteed. If that's what's being asked of Abbott, the Billists might come on side, being craven and always open to consensus for fear of being discovered as a policy free zone, but Abbott is completely hopeless at wrangling his conservative base.

There's no way the Bolter and all the raging, rabid, Adam Goodes booing black haters are going to come on board, no matter how minimalist Pearson cares to make his proposals and no matter how he tries to pander to the fundamentalist conservatives, who claim dear Tony as their fearless non-consultative, kick 'em in the head or the guts leader.

Let's see how Abbott's leadership continues to play out in the gay marriage debate, which has been handled without much fuss in other countries which claim some adherence to whatever "western values" might mean, droning wedding parties aside.

For that we must turn to the bouffant one, returning for another epic bout of hand-wringing apologetics today:

Yep, it's another round of the bouffant one explaining how poor Tony is caught up in the machinations of others and so simply can't do a single thing: 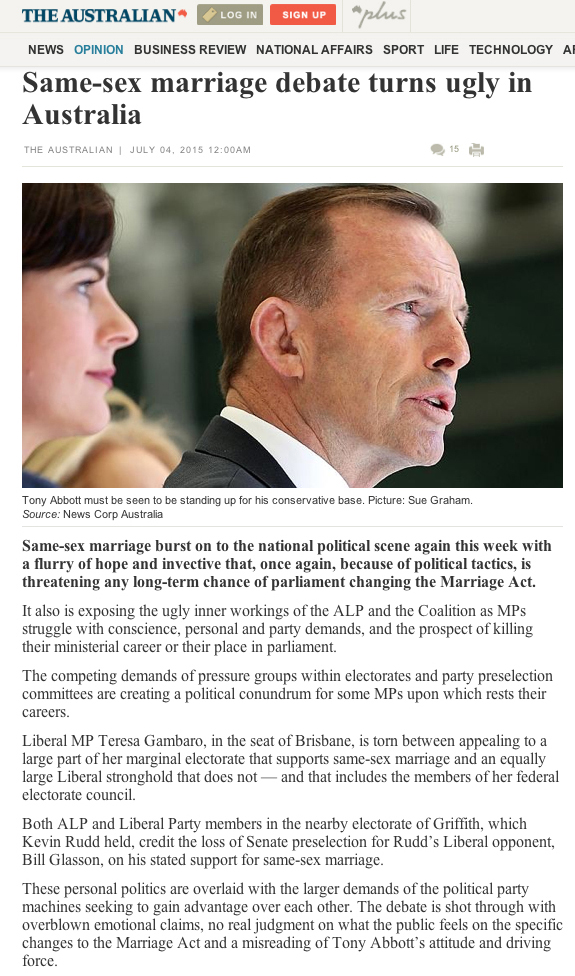 You see how generalities can be turned to good effect? But who were the debaters making overblown emotional claims and displaying no real judgment on what the public feels?

Sssh, please don't mention Erica, or the Asians or Pandora's Box, or bigotry, or marrying your friendly South Australian poodle, or doing a Jack Thompson with sisters, or fear of gays, or being threatened by same, let's get on with poor hapless Tony, hamstrung by absolute necessity and the tyranny of the base: 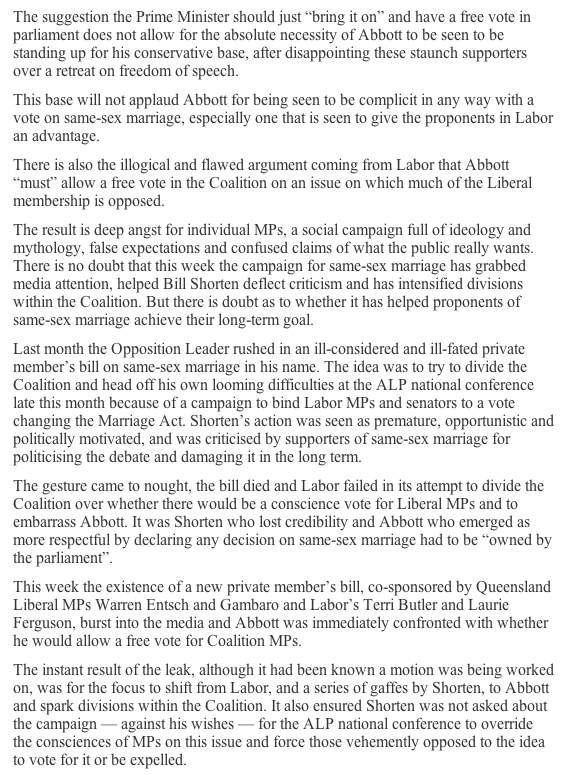 What's funny is that in the same way that the Oz reptilian editorialist delivered today an impassioned plea for Abbott to do something about Aborigines, yesterday the Oz editorialist suggested that maybe gay marriage should be allowed to happen.

But there you can also see the nonsense of all this talk of bipartisanship. In Abbott's world, bipartisan means the Billistas caving in and agreeing with Abbott and not rocking the leather-jacketed boat.

Naturally the handwringing bouffant one has to be deeply sympathetic to Abbott's plight and feel the necessity of pointing out the misunderstandings about Liberal party backbenchers. Many of them remain deeply homophobic and deeply attached to their long-standing policies confirming and supporting their homophobia: 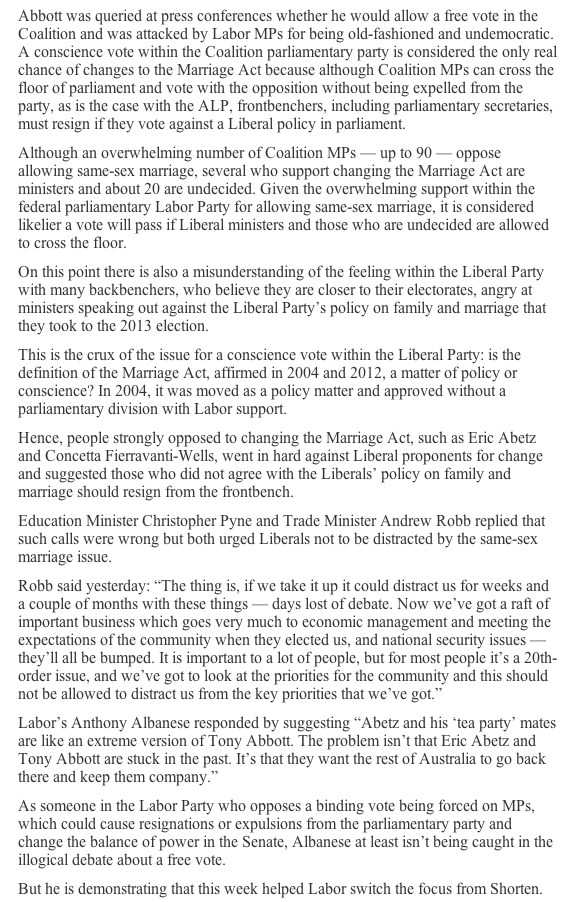 Gay marriage from an Abbott government? You'd be better off herding cats, and damned if you'll get any sense or help out of a herd of reptiles ...

Of course, as is their duty, the reptiles also provided some light relief today, because, as everyone knows, today is Prattling Polonius day, and we can always rely on Polonius to be still blathering on about an issue which reached its nadir with reptile Sherri Markson grave robbing to discover the opinions of Jonathan Shier: Yes, the horse is well and truly dead, but they go on flogging it, and today it's the prattler's turn, arriving late to the scene like an ambulance that had only just discovered its siren:

Sweet long absent lord. If they really had a decent left liberal group think, they'd have blackballed the tedious old fart, known as Polonius to his adoring fans only, years ago ... but instead he keeps on popping up and droning on, like a gathering of cane toads or the roar of a locust plague, thereby helping the pond not to waste its time watching the commentariat talk to each other on 24 ...

But it's the weekend and the pond has suffered enough with its attempts at cat and reptile herding - as has anyone else who made it this far - so let's have a little real humour instead, thanks to First Dog, and as always find more of the good-hearted Doggie - git along lit'le dawgie, the pond loves ya, all the way to the moon and a crispy News Corp - at the Graudian here. 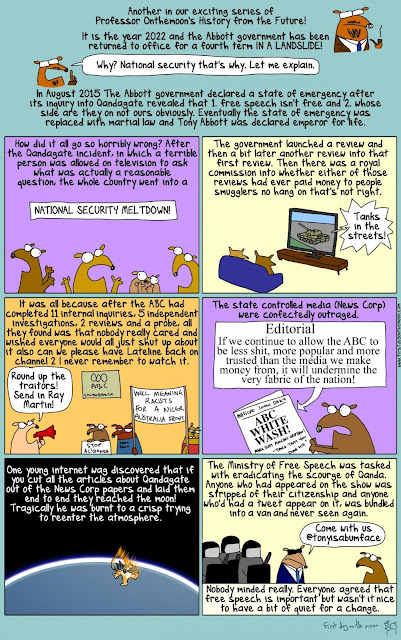