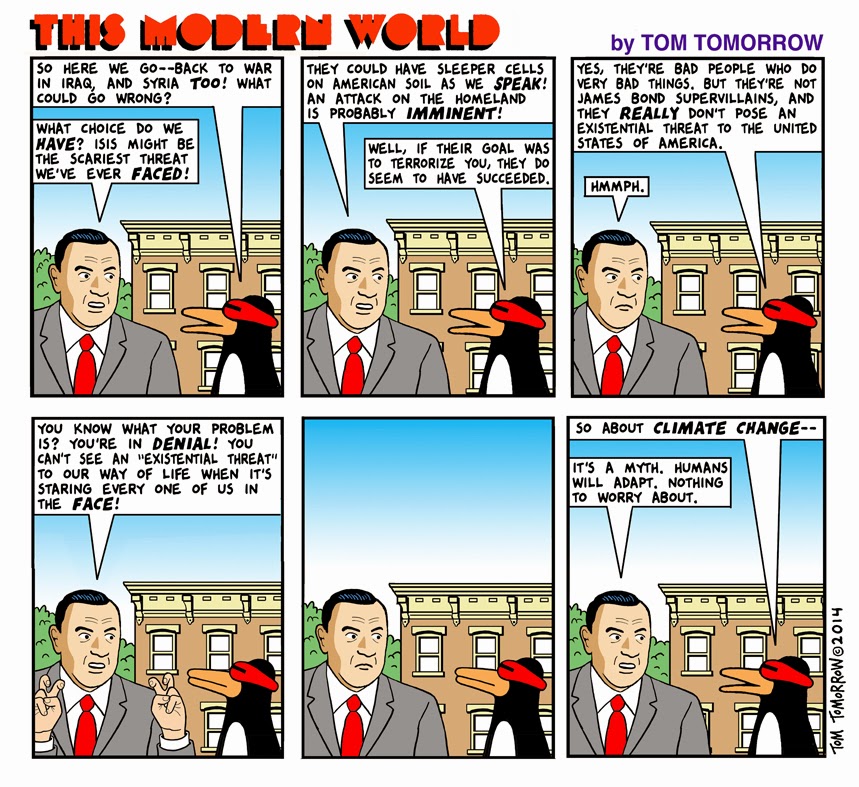 (Above: and source more Tom Tomorrow via the links here).

So there was the pond waking up to the depressing sounds of RN's Rear Vision and a repeat of Iraq - whatever happened to mission accomplished?

The unnerving tale of ideology, stupidity, folly and mistakes was informed by Ned Parker, Feisal Istrabadi - who participated in the construction of a failed constitution - and Hugh Sykes, who made a prediction about the world not seeing nothing yet, just as that 'nothing yet' now unfolds ...

And what do you know? Immediately after that came a sound bite of John Howard saying he was embarrassed about the matter of WMD.

Tens of thousands dead and a country in more misery and chaos and death and destruction than that managed by a brutal, vicious dictator, and he's embarrassed?

In the same sound bite, Howard drew a specious distinction between the intelligence being made up and erroneous, assuring any who cared to listen that it was erroneous rather than made up.

Well that's a whole lot of useful - an erroneous fuck up of enormous proportions rather than a made up fuck up ...

Howard turned up on the Seven network to explain how he was 'embarrassed' rather than ashamed and mortified at his criminal deeds, and that's how it seems to go in Australian politics ...

And what do you know? Immediately after Howard came Abbott, explaining how he wasn't targeting a community, or a religion or what people wear or suchlike things, but was instead targeting criminals, which is a specious nonsense, since everyone knows he's targeting Muslims and if you wear clothes or otherwise have a Middle Eastern appearance, you will be routinely targeted at airports and such like places, and elsewhere and certainly if Jacqui Lambie and Pauline Hanson are in the room, and the likely result of all the paranoia and fear will be the disempowerment of moderates and the encouraging of rabid fundamentalists ...

And then came the perfect visual metaphor for Abbott's government: 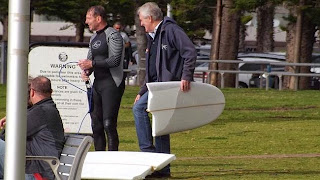 And then what do you know?

Up popped Julia Gillard to admit that appointing Bob Carr, dragging him out of his comfortable retirement, might have been a mistake.

Uh huh. You'd have thought Gillard might have worked out what NSW voters already knew, that appointing Carr Premier of the state was a profound mistake, and we, with stuffed infrastructure, and the Labor party, in corrupt disarray ever since, knew long ago ...

There are consequences for policy failures, but the joy for Australian politicians is that they just write a confessional tome or two, hit the talk and media circuit, and sometimes sound a little contrite, apparently based on the notion that contrition produces forgiveness, and forgives produces book sales ... and what's a little embarrassment compared to keeping books away from the remainders section ...

Well the pond wouldn't spit on the war criminal Howard if he was on fire, and the pond reserves much the same attitude for all the commentariat who fell into line and encouraged the war crimes and the devastation of a country, while right here, right now, in this country, the pigs have begun to fortify their Animal Farm and make sure no stray animals can get into their fortress of power ...

All this before getting out of bed, and contemplating Paul Sheehan's It only takes one drop to swell the tide of terrorism.

Don't ya just love the illustration? 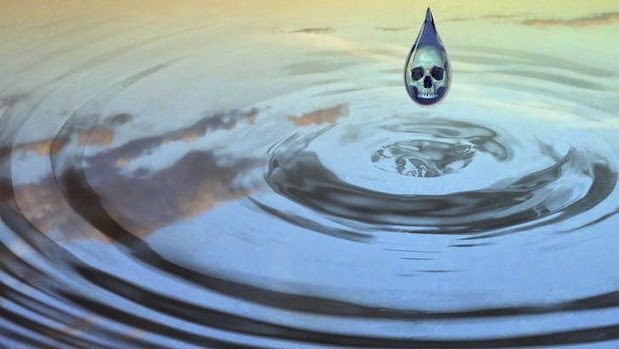 Is there any better example, any better evocation of the distilled perfumed essence of fear-mongering? A drop behind the ears, and the scent will last a week or a year or a decade ...

Was it only last week that Sheehan was getting hysterical about the new torture laws and looking to David Leyonhjelm for help, and before that celebrating Helen Dale joining Leyonhjelm to fight the good anti-torture anti-fear-mongering fight?

Well that was last week, and the fickle Sheehan - who has the consistency and strength of a mindless blob of jelly - was back on song, pounding on the drums of fear and paranoia, doing his very best to create panic and alarm.

Part of it is because Sheehan is an inherently lazy member of the commentariat. He got lots of easy yards and verbal sludge and hysteria and fear by recounting the story of the Washington snipers:

The point is, it only takes a handful of people, or a single determined gunman, to strike terror into a city, even a city as loaded with security as Washington. It takes only a small cadre of killers to move an entire nation to fear.

The point is, it only takes a handful of reptiles at the lizard Oz, doing the bidding of their master, or a single determined columnist at Fairfax, to strike terror into a city, even a city as loaded with security as Canberra. It takes only a small cadre of scribblers to move an entire nation to fear.

On and on Sheehan banged, breaking every known rule of rational discourse - the Communists wresting control of Russia, the Nazis taking over Germany, Mao Tse Tung doing it in China, the Khmer Rouge, the Shining Path, and so on, and so Godwin's Law forth ...

One per cent of any population, if armed and willing to kill its fellow citizens, can take control of any society because most people are not killers.

Yep, it seems Australia is so fragile and inherently weak, that a few determined Islamics could bring it to its knees and the next thing you know we'd be part of the caliphate. You know, like Russia or Germany or China or Peru or Cambodia or all over the world.

How simple minded, how mind numbingly reductionist is Sheehan?

Now it is Islamists who have replaced Communists and Fascists and Maoists as the practitioners of the one per cent principle, leveraging murder for political control. But the emergence of the psychopathic Islamic State is not some sudden pivot. It is a ratcheting up of the intensity that has been coming to a boil in the Middle East ever since the Iranian revolution in 1979. That was the point when Islamic fundamentalists took control of a large nation state. The massacres began immediately, and Iran began to ferment the Sunni-Shiite schism.

Uh huh. You'll search long and hard to find Sheehan mentioning Saudi Arabia or their cultivation of fundamentalist Wahhabism around the world, or the Bush family making out like bandits in their dealings with the Wahhabists.

Instead you'll get a child-like distortion of history, along with child-like dollops of fear-mongering and paranoia:

Twenty-five years later, that schism has become a bloodbath. The one per cent factor is working with a vengeance. Muslims are killing Muslims on a large scale in Syria and Iraq, and on a lesser scale in Libya, Afghanistan, Egypt, Yemen, Pakistan and Gaza. Muslim fundamentalists are killing non-believers in Nigeria, Chad and elsewhere, with outbreaks of violence in Europe.

Uh huh. So what's the point and intent of Sheehan's scribbling?

Well it's to absolve the west of having anything to do with anything. It's all the fault of brutal Islamics doing brutal things, and the innocent west have had nothing to do with it:

Over the past 50 years, Muslims have been killed by other Muslims in enormous numbers as colonialism gave way to nation states. In 1971, more than a million Muslims were killed by Muslims in East Pakistan alone (now Bangladesh). More brutal civil wars followed in Lebanon, Afghanistan, Iraq, Libya and elsewhere. The Syrian civil war has seen about 200,000 killed. Iraq has broken apart along the Sunni-Shiite divide. The cumulative death toll is measured in the millions.

Sssh, don't mention the British in the sub-continent.

And who broke up Iraq and on what basis and just how did the west fuck up the country? Why that's merely an embarrassing aside.

Let's face it, there's no point dumping on John Howard or John Bush, not when you can dump on the Islamics:

The Muslim world has about 1.5 billion adherents. If just one tenth of one per cent interpret the Koran as a command to perform unforgiving jihad, then 150,000 people will engage in violent war. That is what we are seeing. One per cent of one per cent.

The world still has quite a number of journalists and opinion writers. If just one tenth of one per cent interpret their job as a command to perform unforgiving paranoid scribbling, then the quickly reducing number of people who can produce sensible journalism at Fairfax will soon be out of work. That is what we are seeing. One per cent of one per cent, a raving ratbag like Sheehan making a mockery of the Fairfax brand as it goes about the business of click bait trolling ... 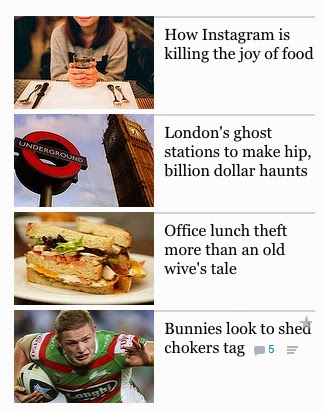 By golly those joy of food and office lunch theft stories look tempting. At least when juxtaposed with an hysteric ...

It is a statistic we must not forget. Those who engage in terror seek to cast a much larger shadow than their real numbers. We are not at war. We are not confronting a monolith. We are seeing the one per cent of one per cent at work. In Australia, in the past few days, we have rolled up a dozen sub-bogans invoking "jihad" to obtain notoriety.

Say what? All that talk of Maoists and the Bader-Meinhof gang and Nazis and the Bolsheviks and all the rest, and suddenly we're reduced to talk about a dozen sub-bogans in search of notoriety?

Well in Australia in the past few days we have rolled out a few shrieking parrots of the barking mad Paul Sheehan kind, always desperate for a place in the sun, and notoriety has hard liners, but buggered if the pond will provide one cent towards the platforms that offer these ratbags their sub-bogan place in the sun ...

Meanwhile, there is a real war about to go down, involving climate change. And where was Sheehan when that began to roll out?

Why off with Lord Haw-Haw, otherwise known as Lord Monckton ...

The end result of all Sheehan's fruitful endeavours to trash the Fairfax brand over the years?

Well no doubt will in due course he will have reduced the opportunities for alternative views of the world: 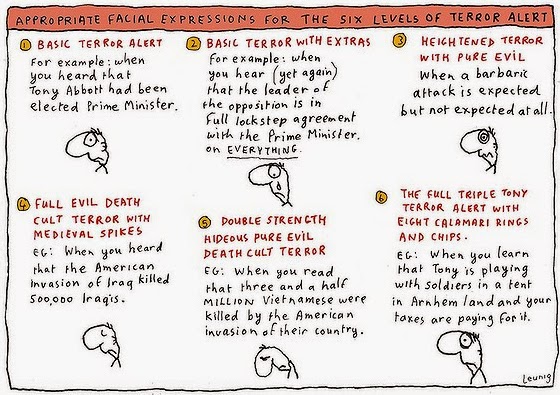 Sorry Leunig you left out a meal.

The full triple Paul roasted chicken little terror alert with a side serve of Nazi salad and Bolshevik beans, Bader-Meinhof lentils, along with tasty wedgies of Washington snipers and a light drizzle of Mao. (More Leunig here).
Posted by dorothy parker at 9/22/2014 08:06:00 AM