Christopher Pearson, and how choice leads to Pearson-ism in science, and thetans and creationism in schools ... 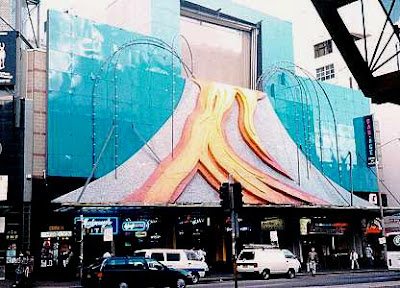 (Above: scientology art in George street Sydney in the good old days. Below: volcano thinking coming to a school near you? We have one nearby, and thank the absent lord for choice).
It's a blessing and a relief that Christopher Pearson has for the moment at least stopped scribbling about climate change.
After all, there's only so far an interest in the Latin mass can take you when it comes to dealing with actual science.
Who can forget splendid insights like these?
When Charles Darwin unveiled the theory of evolution, the world at once divided into rationalists and creationists. The theory that man-made greenhouse gas is causing potentially catastrophic climate change is another great divider. On one side are the sceptics, who want compelling evidence. On the other are the true believers. (well actually the world seems to have forgotten, as the link is dead, and so we're left with a secondary source here).
What splendid logic, as you might expect from a lover of the Latin mass. Sceptics as intrepid scientists, and climate change scientists as creationists.
Well the world moves on, and perhaps the most alarming, astonishing and disturbing revelation is that some benighted parents have selected Pearson to deliver home schooling to their children. That news came in Great education available outside the mainstream, in which Pearson touted the notion that home schooling (and private and selective schools) gave kids the best change at learning.
And now having dipped his quill in this inky wisdom, Pearson's at it again, this time with Vouchers just the ticket for better education.
Happily there's some decent information on school voucher systems on the intertubes - there's a sensible wiki here which looks at the pro and con arguments, and provides links to various implementations of various schemes.
Suffice to say that in the United States where voucher schemes have been most active, the results are mixed, and the implementation comes at a time when secondary education in the United States is going down the gurgler. While the United States does well in the percentage of population that attains at least an upper secondary education, its results, especially in science and maths, are mixed.
In the most recent OECD survey, using 500 as average, Australian students scored 527 in science, in fifth position in the seventeen countries above the average, while the United States managed 489, in fifth position in the eighteen countries below the mark. (Education at a Glance 2010: OECD Indicators and here for that table).
There's plenty more data of this kind, which makes it all the poignant to see Pearson run head long into the embrace of the voucher system. His reasoning is inevitably specious:
Federal Labor has been claiming of late it has abandoned a longstanding historical bias towards the public system and doesn't want to discriminate between schools on the basis of who owns and runs them. Rather, it says it seeks to prioritise the needs of the individual child and respect parental choice. If the ALP is serious about these claims and wants to burnish its credentials in educational reform, it should revisit vouchers as a policy option.
Uh huh. Let's not discriminate between schools on the basis of who owns and runs them. Let's just celebrate the wonders of parental choice. And let's hope everybody chooses a decent Krispy Kreme education ...
Well while it's no doubt tiring and tiresome to keep reading about the Athena school around the corner from us, which has its very own wiki here, it's even more tiring to think of taxpayers' dollars subsidising a scientological education. Just as it's depressing to read about Exclusive Brethren schools being given a hefty cash handout by Australian taxpayers - Exclusive Brethren school kids 'brainwashed' is one story from 2006, but you can find dozens more ...
Even after former chairman Rudd branded the religion a cult, the Labor government was handing over $70 million in funding (Brethren schools get $70m in funding).
Thanks to the measures introduced by John Howard's government, shifting the balance to the private sector, anything now goes - fundie Christian, Muslim, Thetan or spaghetti monster fearing - as a basis for a secondary education, and it's a miracle that the public system has stood up as well as it has under the onslaught.
Of course if you have a stake in the Catholic education system, all this is just collateral damage, so long as the Catholics get their fair share of the loot (and ditto the Anglicans and the other more mainstream Christian based schools).
Naturally Pearson sees vouchers as a way of continuing this ideological shift, while also indulging in a bit of union bashing:
Even when it admitted the elegance of a form of funding that followed the child rather than the institution, the Left has been beholden for far too long to the teachers unions. The unions have always been more concerned with preserving their members' quasi-monopoly as service providers than with the quality of the service itself and the needs of students.

It's not hard to see why the education unions have been so hostile to any form of vouchers. They promised to increase parental choice, which made them popular. They also threatened to improve the viability of low-fee independent schools, the fastest growing sector of the education market, especially in outer suburbs.
Yep, that's right, and they also threaten to improve the viability of ratbag fundie Christian and scientological schools.
The Labor government has repeatedly shown itself to be craven about tackling the current funding absurdities, and what Pearson proposes will only heighten these absurdities.
I guess in a world that sees Pearson posing as a scientific expert on the matter of climate change, there's not any reason to panic about an explosion in secondary schools dedicated to the notion of creationism. You can catch the drift of that kind of thinking in this story,Christian schools angry over ban on teaching creationism.
Thanks to the Howard government's dedication to "choice" in education, science teaching in Australia has tended to drift in the same direction as science teaching in the United States. Here's a story Faith school boom 'creates division':
The rapid growth of faith-based schools under the previous federal government has threatened the social cohesion of the nation, according to Deputy Prime Minister Julia Gillard's most senior education adviser.
Uh huh. So what did former Chairman Rudd and current Chairwoman Gillard do about it by way of reforming the structure of funding? Does wringing your hands and adopting a worried frown count for anything?
Professor McGaw's remarks reflect a profound shift in education in the past two decades, with more than 200,000 children - almost 40% of non-government school students - now attending a religious school outside the main Catholic, Anglican and Uniting systems.

The change has meant that, for instance, increasing numbers of children are taught creationism as part of their science classes.

And despite mainstream health experts arguing for a "harm minimisation" approach to sex education, many emphasise abstinence until marriage, asking students to sign "pledges" to remain virgins.
That's how you end up with this kind of mealy mouthed, convoluted, nonsense:
The principal of Chairo Christian School in Drouin, Rob Bray, said that both evolution and creationism were taught in his school's science class.

"We don't hide the fact that there is a theory of evolution, and that's how we'd present it, as a theory," Mr Bray said.

"We teach it, explain what it is, and at the same time we present clearly and fairly, and we believe convincingly, the fact that our position as a school is that God created the heaven and earth … There wouldn't be any point of being a faith-based school if we didn't think that God was the creator."
Here's the rub for Pearson, intent on dismantling what's worked for well over a century, by replacing it with a rabble under the header of "choice":
The successes of a free, compulsory and secular public system since the 1870s have tended to blind Australians to the possibility that a very lightly regulated market in educational services is at least as likely to deliver what parents want for their children. After all, what is there that is intrinsic to education that demands it be delivered by monolithic institutions, apart from the high level of job security to which the service providers have become accustomed?
Yep it's the usual nonsense about monoliths and regulation, and if you follow that logic, you might wonder why there's any such notion as compulsory education. Surely children should be free to choose as to whether they want any education at all. "Choice" for kids the new conservative slogan ...
But the real rub is the notion that it's a secular system. And that's how, as the secular system breaks down courtesy of the magic notion 'choice', these days you can smuggle all sorts of eccentricity into the system ...
And following the rabbit of fairness and 'choice' down the rabbit hole helps make a nonsense of national curricula or education standards, leading not just to fundie Christian and fundie Muslim education but to any gaggle of teachers who might get together to peddle their wares, whatever those wares might be ...
So next time you read the commentariat going into a frenzy about Muslim education, just remember who encouraged the shift from a secular to a religious system ...
Yet here's Pearson and Pyne still rabbiting on about the wonders of choice, and how things will get better under their voucher plans:
Asked about the Coalition's attitude to further voucher plans, Pyne said: "We saw the education card very much as the first step in a larger plan. Depending on the success of the card, it could have been extended to include indigenous, rural and remote and low-SES students. We're committed to empowering schools and giving parents greater choice."
Well they gave parents greater choice, and now many more students are coming to understand that creationism is just an alternative scientific theory. While others begin to grasp that, for a fruitful life, students need to embrace their inner Thetan ...
The Howard government produced a cataclysmic change in education funding priorities, the implications of which will only emerge decades down the track, such is the nature of slow boiling change in education systems ...
Second thoughts, we already have evidence of its implications ... students studying Christopher Pearson as a scientific expert in climate change, and now an education expert in favour of "choice".
Don't ask where the "choice" might lead ... remember any choice is good, and parents who choose Pearson to deliver home education are doing their students a favour ...
And of course loon pond is exceptionally pleased, as the pond can only grown bigger and stronger and more inclusive thanks to these educational strategies. After all, the pond celebrates loonacy, and so we're all in favour of empowering schools and giving parents greater choice to ruin the children's understanding of the world and science, by teaching the wonders of creationism and warning them of the dangers lurking in volcanoes ...
One day Australia might be full of Pearsons, just like loon pond is ...
As snappy Sammy Goldwyn used to say, if that comes to pass, include me out ...
(Below: and now a couple of creationist jokes, click to enlarge, and plenty more cartoons of a similar kind here in Cartoons attacking Creationism). 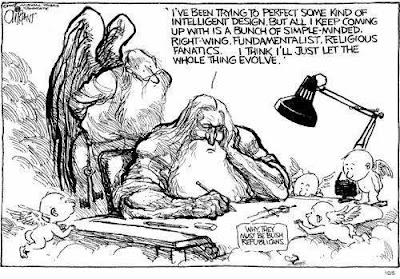