Piers Akerman and the collected wisdom of rattus scribblerusi ... 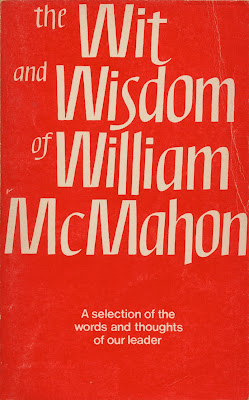 (Above: my copy of Billy's wit and wisdom, alas a short tome, but a perfect companion piece to my proposed collection of The Wit and Wisdom of Piers Akerman, which might also be sub-titled the musing of a rattus columnisticus commentariatus about rattus politicusi).
It seems it's the only solution.
We've decided on a book burning as a means of drawing world-wide media attention to the pond, home of loons.
But it needs to be an equal opportunity book burning, so we're getting together a Bible, a Qur'an, a Torah, a whole bunch of sutras, the Dhammapada and the Pali cannon, and just to be inclusive, the pick of the thoughts of L Ron Hubbard, acquired at vast expense for unclear reasons.
To make sure no stone remains unturned, we're throwing in several tracts by Karl Marx, the little red book of Chairman Mao, the collected thoughts of Colonel Gaddafi and Fidel Castro (wheelbarrow may be required), and the wit and wisdom of Billy McMahon. There, that last offering should alienate every conservative on the planet.
Then we realised we had a problem. Here at the pond we tend to collect sick books, bring them home, and care for them, never mind if the actual words within are drivel. We were taught that book burning was the sort of things Nazis did, and that if you saw it happening you didn't have to put a dollar in the Godwin's Law swear jar if you called it a Nazi sort of thing to do.
So we hit on a grand idea. Rather than burn copies of the collected books, why not put them all on a disc, and smash the disc? Perhaps even a little USB flash drive would do? But would that be a sufficient statement? It sounds a little modern, and luddites should never be modern.
The solution? We've decided to put all the religious nonsense to hand on a floppy disc, as a way of protesting how the increased capacity of computers and the full to overflowing interweb is making us stupid (How the internet makes us stupid - read the ideas and inspirations of Nicholas Carr to find out how Nicholas Car can also make you stupid).
So that's it. Now to give the media plenty of warning and lead time, we intend to smash up a floppy disc of all the religious and political texts we can find on the next 'Andrew Bolt is a dickhead' day in Newtown square at twelve noon, as calculated by the clock in the famous iconic dog sculpture.
Why would they pay attention to such an aberrant fuckwit loon idea? Because they do it on a daily basis. In fact, the purely evil empire of Rupert Murdoch hosts the likes of Glenn Beck to spread confusion, doubt, uncertainty and fear on a daily, well paid, basis.
Speaking of loons, if you want a simple explanation of why the independents went with Labor, and why they were wise to do so, you only have to revert to that antipodean outpost of the evil Murdoch empire, the Daily Terror, and read Piers Akerman's column ALP caught in trap of its own making by two rats.
The two rats in question are Tony Windsor and Rob Oakeshott, and Akker Dakker doesn't hold back. Temperance, as in moderation in action, thought, feeling or restraint, might be considered by some to be a virtue.
Not Akker Dakker. In that sense he's completely virtue free.
According to the holy writ of Akker Dakker, the pair are genuine members of the genus rattus politicus. Political kin to the much-maligned rat Mal Colston.
Windsor is incredibly bitter, a verbal attack machine, a poor candidate who strangely goes on winning, intent on revenge, lashing out with wild accusations, and given to outrageous claims in that great coward's castle, parliament.
Yep, so much for the concept of parliamentary democracy in Akker Dakker's world. Parliament is just a castle for cowards, traducing poor hapless innocent souls like John Anderson, who is so innocent the sun blushes whenever it sees his sweet chubby cheeks.
Meanwhile, Oakeshott is given the acts of a "na advive" young fool (sic, so and thus in Akker Dakker's world of the abusive typo). He believes he's a political genius headed for political stardom, except strangely he got elected as an independent and turned down a ministry.
These two rats, according to Akker Dakker, owe their thanks to the union movement, and Labor, and already the keen as mustard ACDC has shuffled Tony Windsor off after the next election, having had his moment of treacherous glory.
Another NSW independent, parliamentary Speaker Richard Torbay, is already being groomed for the seat and is making the usual ambiguous, mealy-mouthed remarks independents make.

Oakeshott, typically, can’t make up his mind. He doesn’t know whether he can convince his constituents that he has ignored them for a yet-to-be-seen and history-defying brighter (Left) future.

Small wonder that rats are always looking nervous.
Mealy mouthed? Why yes that's much more appalling than straightforward up and down lashings of vitriolic abuse, delivered in good martinet sergeant major form.
You see, this ACDC column is an epic bout of boofhead, head-kicking glory, a kind of baseball bat assault to the head, backed up by crowbar and piece of four be two and jemmy, and rounded out by a little cutthroat razor slashing, that establishes firmly that Akker Dakker is a verbally abusive thug of the first water.
He must spend his nights sharpening the steel caps on his Blundstones, dreaming of a kick to the temple which will take out a rat or two.
Naturally all the rabid spluttering spitting ratbags came out in Akker Dakker's comments section, to revel in his Clockwork Orange routine and celebrate his elevation of political discourse to a new level of thuggery.
Oops, I think I meant to say take the elevator to a robust discussion.
Personally if Akker Dakker called me a rat, I'd wear it as a badge of honour. He makes as good an argument for being an independent, apart and aloof from the mindless cheerleading and the boofhead vicious vindictiveness of narrow minded one party goons, as I've read in recent times.
Sometimes when reading Akker Dakker it's possible to feel like you're slipping into a murky slippery quicksand, like Bear Grylls, perhaps surrounded at the same time by a horde of poisonous vipers, or sunk to the bottom of a bottomless verbal pit of vile green sludge and bitter hateful animosity.
It's moments like these you need to find yourself food, and shelter and warmth, because trapped in the angry glare of Akker Dakker's icy voice, it's possible to die shivering within hours of reading.
But it's also immensely cheering, because when you see someone that antagonistic, hostile and angry, you wonder what's gnawing away at his vital parts, and thank the absent lord that you can walk along another path, much happier and seemingly more content.
But remind me to include the collected scribbles of Akker Dakker on that floppy disc as I line it up for a jolly good smashing.
I might even be doing the world a service ...
Oh I know, I know, it'll still be all out there in the cloud. If only Akker Dakker was in a cloud somewhere too, wandering lonely like a lost daffo dill ...
(Below: the internationally famous, world renowned dog sculpture at which the floppy smashing will occur. Set your watch by the dog's clock. What's that? There isn't one? Never mind, we'll find some way to celebrate 'Andrew Bolt is a dickhead' day). 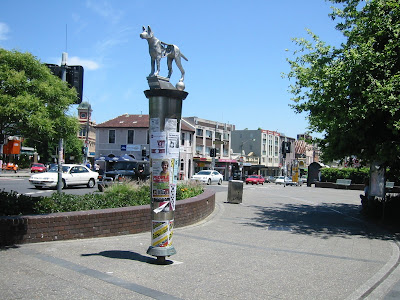