Hal G. P. Colebatch, and yes, feel free to mention that John Lennon and Mick Jagger have ruined England in the way the Nazis ruined Germany ... 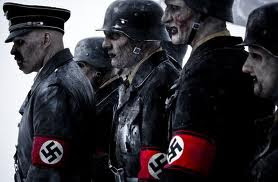 Damn you lady Di, you candle in the wind, damn you Prince Charles for embracing a flickering candle, damn you Queen Elizabeth for consorting in bed with that damnable Philip and producing such an emasculated heir. Once more the monarch has ruined Britain, and turned it into the kind of frivolous farce last seen in the days of Charles II. Bring back Oliver Cromwell, and bring him back now ...
And to think that brave man Nelson, who once had a mistress, is now so maltreated and forgotten in these sceptred isles ...
And finally, let's just touch on Colebatch's latest offering, Now Obama Offends Australia.
Colebatch is rightly indignant at the way the fiendish Obama has flown over Australia (or nearby) on his way to Indonesia, and in the process of soundly trouncing and denouncing the wimp, who so forgets his friends, makes this compelling point:
Talk of Australia looking to a new protector in China can be dismissed as sensational fantasy, although of course there is always an adversary-culture Left ready to exploit reasons for anti-Americanism, real or manufactured. Already these are commentators wondering loudly why Australia is sacrificing soldiers’ lives in Afghanistan on behalf of an ally who evidently doesn’t take it seriously.
Could this be a reference to that adversary culture Left exemplified by Paul Sheehan in Lives lost currying US favour?
Did we get it all wrong? Has Colebatch teased out a haunting truth?
Could it be that Paul Sheehan is in fact an evil double agent, and his pose as a right leaning commentator is simply a disguise, as he trolls this country towards leftist defeat and a very British slide into ignominy, corruption and despair?
Serious questions.
Still I was moved by Colebatch's advice regarding abuse while conducting a debate, and pleased to see, in the responses and comments to his latest piece, that his defiant advice regarding Godwin's Muslim Law had fallen on fertile ground:
He's a MUSLIM. He's a Muslim, he's a Muslim, he's a Muslim. The only ones who's *SSES he's kissing, are the MUSLIMS, the MARXISTS, the SOCIALISTS, and the COMMUNISTS. Why?
"And I saw the BEAST rise from the SEA. And he was given a MOUTH, to speak Haughty and Blasphemous words. And he was allowed to exercise authority for forty two months." Revelations 13-5.
He only likes the Countries that Free People consider to be EVIL. Open your Eyes. There's no other explanation. The Mayan Calender ends Dec.21, 2012. Barack Hussein Obama's reign, ends Jan. 21, 2012.
Coincidence?
Well as another noted Obama's term actually expires Jan 20/21, 2013, the precise moment dependent on your level of pedantry, and give or take impeachment, an assassin's bullet or other unforeseen event, but these are mere details, schmetails, because everything will surely end badly ...
The Nazi left and their Goebbels Goering goon squads and SS rabble will see to that ...
I must say after this splendid way of wasting a lunchtime, I did wonder if they were putting too much fluoride in the water in Sydney ...
I wonder what the level of fluoride is like in Perth?
(Below: Sarah Palin giving a satanic sign? Or merely proving she loves that good hard edged American rock in preference to the appalling soft core pop music emanating from Britain, which once almost ruined American and western civilisation, having already ruined the empire. Damn you George Formby, damn you and your banjo ukulele plucking to hell). 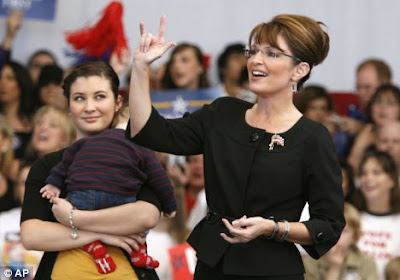