Gerard Henderson, big Mal, and forget policy, not when it involves the manly love of Tim Costello and outrageous socially progressive thinking ... 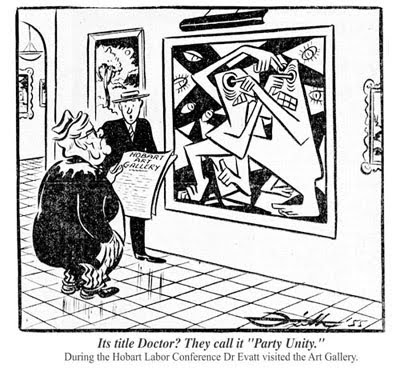 (Above: same as it ever was. More Frith here).
It hasn't taken big Mal long to get himself into trouble.
Lately he's got back into blogging, what with his job now being to give the NBN a pummelling, and never mind coming up with a substitute positive policy for the moment, even if prissy Christopher Pyne has nattily proposed that change could be in the air in Coalition broadband plan could be changed:
"... he'll be promoting the coalition's policy and I'm sure there will be refinements to all coalition policies over the coming months, and if necessary years," he told ABC TV on Sunday.

Mr Pyne said the coalition would be irresponsible not to adapt its policies as "circumstances" changed.

"Refining means ensuring that our policies remain fresh, up-to-date with existing circumstances and picking up the aspirations and hopes of the Australian people."
Big Mal's gambit? To decry the comparison of the NBN to the Snowy scheme, and suggest Snowy Scheme well thought through compared to NBN:
So the question for Julia Gillard is this: if the Snowy Mountains scheme is to be benchmark for national infrastructure, why is her so-called 21st century equivalent proceeding without any of the analysis that preceded the Snowy scheme?
But the comments on his blog didn't entirely flow big Mal's way:
Malcolm will never be credible in this negative undertaking because people actually believe that he is a positive person who sees a lot of benefits in the NBN.
When your brand is positive energy and vision it seems a pity to be wasting yourself on a negative campaign you don’t really believe in.
Big Mal should remember that the Snowy scheme broke a few eggs, not least the water flow in the Snowy River itself (Court battle looms over Snowy River flows), and many punters hope he can find a way to get him out of negativity mode.
But what do you know? He's working for Dr. No, and Dr. No has many mindless commentariat commentators providing sheeple support.
As soon as big Mal tells the truth about his personal views on things - views well known and for a long time held - he gets himself into trouble.
When the BHP Billiton chief, Marius Kloppers, urged the Gillard government to set a carbon price to allow Australia to retain international competitiveness, Turnbull tweeted: ''Very thoughtful speech by Marius Kloppers BHP CEO on climate change policy.'' It was sent, incidentally, at 2am.

If this continues, Turnbull will strain the shadow cabinet's rules, test Abbott's patience and frustrate many of his colleagues. Yet Turnbull has no intention of falling silent on this question. (Turnbull's 'war' prompts thoughts of another battle).
Oh dear. That's brought our favourite prissy, natty, prattling Polonius out of the wings with a stern lecture, Turnbull must learn to pull his head in.
There are so many things wrong with big Mal, according to Gerard Henderson, that it's hard to count the ways.
For a start, Tim Costello loves him. And we all know that Tim is the black sheep of the Costello family, or at least the most inclined to resemble a watermelon. Being loved by Tim, in a manly policy loving kind of way, is a bit like being embraced by a centre left leper.
But big Mal's biggest crime?
Turnbull, on a good day, is a plus for the opposition. Yet his policies on climate change - and his socially progressive beliefs documented in Annabel Crabb's essay Stop At Nothing - are far from popular in the outer suburbs and regional areas where most marginal seats are located.
That's right. Forget about policy, just promote policies that appeal to marginal seats, and appeal to Queensland and WA voters. Forget about principle, get ready to fawn on mining and weeping billionaires. Go redneck, and all will be well.
You see, even if you're a member of that most loathsome group - the inner city elites - you can be a team player and play a team game:
Certainly Turnbull did very well in his seat of Wentworth, with a swing of 11 per cent of the two-party preferred vote. This partly reflected the support he received from former Labor supporters. Yet it should be remembered Joe Hockey obtained a 9 per cent swing in North Sydney - and he was a senior member of the opposition who did not publicly distance himself from his leader on climate change.

But what if the current Liberal party policy settings on climate change are a dog's breakfast, a bit like the confused policy position on the NBN?
Never mind. And don't worry about all that idle speculation that former Chairman Rudd's credibility-sapping change of heart on climate change - downgrading it from the greatest moral challenge of our time to a venial sin requiring action in the bye and bye - might have cost him support in the polls, and therefore in the party room, as the faceless men jumped to the cries of the outer suburban and regional votes, and so in the end his leadership (Politics trumps a moral challenge).
Our prattling Polonius's sage advice?
Heed the National party, the same ones that just got done over by a flock of independents. Trust that Queensland swung, not because of indignation about former chairman Rudd's knifing but because there are no climate change believers up there.
Follow the leader who got so close to winning, sheeple, you have nothing to lose except a desire for innovative policy making...
But surely, with Abbott teetering so close to power, now's the time to review policies, come up with better ideas, get rid of the Dr. No routine and come up with alternatives to an NBN on the cheap, a dirty policy deed done dirt cheap, and fanciful notions such as 15,000 workers marching to rid the antipodes of climate change?
Not in world view of our prattling Polonius. Big Mal must fall in to line and chant four legs good, two legs bad:
"We will teach this miserable traitor that he cannot undo our work so easily. Remember, comrades, there must be no alteration in our plans: they shall be carried out to the day. Forward, comrades! Long live the windmill! Long live the cheep cheep NBN! Long life heroic workers marching to stop climate change! Long live Animal Farm!"

Yes comrade Henderson of the thought police. We agree. Death to the NBN! Down with climate change. Sorry. Up with Andrew Bolt, and down with miserable believers.
Catch that Snowball and punish him. We need team players here, not policy wonks. Want a policy on broadband? Don't consult tech heads - what would they know, poor deluded dears - but instead follow the instincts of a man proudly not a tech head. Devise a policy on climate change which promises effective action? No, no, no, follow the man who believes it all to be crap:

"Forward, the Liberal Party!"
Was there a man dismay'd?
Not tho' the soldier knew
Someone had blunder'd:
Theirs not to make reply,
Theirs not to reason why,
Theirs but to do and die:
Into the valley of empty policy posturing
Rode the six hundred.

Cannon to right of them,
Cannon to left of them,
Cannon in front of them
Volley'd and thunder'd;
Storm'd at with shot and shell,
Boldly they rode and well,
Into the jaws of a policy void,
Into the mouth of broadband hell
Rode the six hundred. (with apologies to Alfred, Lord Tennyson, the original here).
Yes, that's what we need. A bunch of automatons mouthing the policy platitudes designed to appeal to a few marginal seats, and to hell with principle. Just lots more Dr. No ...
The alternative is simply too grim, too hideous, too existential for any proper Liberal to contemplate:
Turnbull may become a team player. Or he may become yet another Liberal who spends much time criticising the party he once led - in the tradition of the late John Gorton, Malcolm Fraser and John Hewson. They are the kind of Liberals whom Tim Costello loves.
Yes, we know what that means. We know that kind of appalling distasteful love. Oh damn you, damn you socially progressive types, and your outrageous ways and your appeal to inner city elites, at least the wrong kind of elites, not that there's anything wrong with inner city Sydney Institute (41 Phillip Street Sydney NSW 2000) or Institute of Public Affairs (Level 2, 410 Collins Street Melbourne Victoria 3000) elites, because these elites are only in the heart of town to spy on and report the evil doings of dangerous other elites:
"Comrades," Napoleon Henderson said quietly, "do you know who is responsible for this? Do you know the enemy who has come in the night and overthrown our wonderfully negative NBN and climate change policies? SNOWBALL TURNBULL!" he suddenly roared in a voice of thunder. "Snowball Turnbull has done this thing! In sheer malignity, thinking to set back our plans and avenge himself for his ignominious expulsion, this traitor has crept here under
cover of night and destroyed our negative policy work of nearly a year. Comrades, here and now I pronounce the death sentence upon Snowball Turnbull. 'Liberal Hero, Second Class,' a chance to run in a marginal seat in the north of WA or Queensland, and half a bushel of apples to any animal who brings him to justice. A full bushel and a seat representing inner city Liberal elites to anyone who captures him alive!" (the original Orwell here)
Oh yes, the next few months are going to be grand, with former chairman Rudd swanning around the world, and big Mal daring to tweet in ways that can only continue to shock and upset Gerard Henderson with his dangerous social progressivism and thin veneer of Liberalism and his failure to be a team player in a team of rah rahs.
Perhaps it's time for big Mal to get his own personal motto, even if it is borrowed from Hillary Clinton supporters back in the days when they were maintaining the rage against Obama.
Who knows, in the end it might result in Tony Abbott getting down to actually thinking about policy settings rather than keep on auditioning for a role up against Daniel Craig ...
The motto? 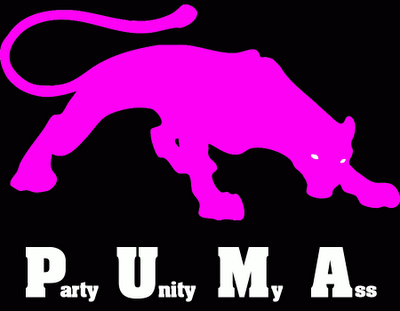