David Penberthy, and a quiet stroll through a graffiti-clad impertinent mind ... 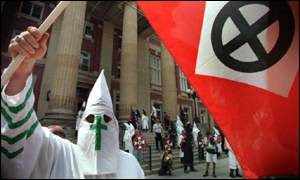 (Above: the Ku Klux Klan getting agitated back in 1999 in the lotos land of Oz, here).
Eek. What's that in the sky? Or more precisely in the Sun Herald ...
Is it a bird, or a plane, or a sign writer? Eek, it's a Daddo.
More precisely, an Andrew Daddo, scribbling furiously about his dog in This little piggy has given her family a new leash of life.
For this forests are still being pulped?
Oh dear, time to move over to the heavyweights at the Telegraph. But what's this? Akker Dakker silent, with not a word from Piers Akerman since he announced Julia's deal shakes faith. A full week ago. Has the indefatigable scribbler become defatigable?
Back then he was moaning about Oakeshott's bad faith in seeking the speakership. Since then there's been more bad faith shown than a flock of atheists at a Jim Jones' memorial 'drink the kool aid' party. What would Akker Dakker make of Tony Abbott's display of good faith in relation to the speakership?
Say no more ... we have the answer. Over at The Australian, the pompous Christopher Pearson explains in learned tones exactly why Tony Abbott was legally required to do what he did, in Parliament squeezes into the Constitution, citing the expert and completely independent opinions of one George Brandis ...
Naturally without Abbott doing what he did, mere chaos and anarchy would have descended on the land for an eternity:
Imagine the havoc if the High Court were called on to consider the validity of all or any legislation passed under such an arrangement.
Imagine! (And please, no singing of John Lennon songs).
They tell me that as well as being an expert constitutional lawyer, Pearson is well known as the nation's leading climate scientist. As well as a dab hand at the Latin mass.
Come back Andrew Daddo. I'm sorry I was mean about you and your pooch.
Oh dear, how to fill in a lazy Sunday?
Well there's always David Penburthy explaining in the Sunday Telegraph how Sergio Redegalli's mural in Newtown about burqas is freedom of speech. Which has simultaneously been published in The Punch, with sign board illustration, under the header Freedom of speech extends to the vulgar, vacuous and vile. Indeed. Ain't those subbies so different and clever. And ain't The Punch a testament to the vulgar, the vacuous and the vile on a daily basis ...
Penberthy begins by explaining how he drove 300 kilometres across North Carolina to have a pork sandwich. There, that should get the Islamic fundies going ...
Oh sorry, it's actually the signs he saw along the way, or more particularly a Ku Klux Klan swastika and Confederate flag ...
The even-tempered Penberthy saw the billboard as a sign of a vigorous democracy at work. Which is indeed the way I felt when I saw the IRA and Unionist signs when last in Northern Ireland and why the ETA signs demanding freedom and promising bombs and revolution for the Basques were such a jolly example of sloganeering in Spain.
None of that German nonsense about Nazi insignia and how pleasing for Penberthy to enjoy vigorous democracy in the United States. I wonder what would have happened if he'd gone through North Carolina - in ancient music hall or Trading Places style - in black face. Would he have been so complacent about the joys of the Ku Klux Klan? Nothing like a lynching or a burning to get the democratic juices flowing.
Not to worry. Penberthy's main point is the vast amusement afforded to him by a mural in our very own suburb: 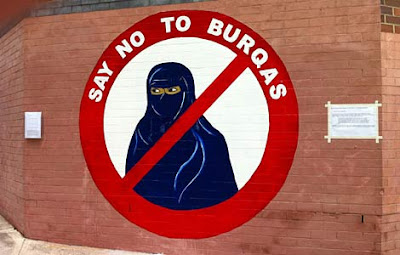 This week in Sydney, hilariously enough in the counter-culture suburb of Newtown, which is positively crawling with lefties, artist Sergio Redegalli faced universal condemnation over his inflammatory mural featuring a veiled Muslim woman inside a circled red line reading “Say no to burqas.”

What? He should face universal approval?
Amazingly, Marrickville Council - which has never responded to one of my missives - found itself moved to take action:
Marrickville Council – one of the first in Australia to declare itself nuclear-free, thus preventing an arms race between Petersham and Stanmore – said that while it had no legal power to force the removal of the mural on Mr Redegalli’s private wall, it had sent staff to the artist’s house and asked him to cover it up voluntarily.

The sage Penbo then goes on to explain why they might have taken steps. Impotent steps, but steps ... Muslims having complained that it's “an immature way of starting a debate.”

It’s certainly that. It’s already been defaced, twice. It will probably get defaced again now that it’s been the subject of so much media coverage. The council has received several complaints about the mural, and is understandably concerned that it could become the flashpoint for a nastier brand of payback.

It’s not a particularly good bit of art either. The woman looks cartoonish, and it’s unlikely Mr Redegalli will be making the shortlist in the Archibalds any time soon.

Yes, yes, you can see why a bunch of cardigan wearers might take steps and ask for its removal:
For all these considerations, it is still an impertinence for the council to approach Mr Redegalli about taking down his silly mural.
Say what? An impertinence? As opposed to say an ineffectual gesture, or a pose designed to take the heat off the council? An impertinence?
What? In the dictionary sense of:
1. disrespectful behaviour or language; rudeness; insolence

You mean, when confronted by a crude confronting piece of agit prop propaganda the Council shouldn't have taken any steps because it's being disrespectful, rude and insolent? So a rude, disrespectful and insolent sign should be met with silence?
What arrant humbug and nonsense, cloaked in the usual way under the cloth eared notion of freedom of speech.
Let the council approach whomever, and let the resident disagree, and then let it turn into a file, and then let the file be full of froth and bubble for all eternity ... So it was in the past with councils and planning applications, and so it will be in the future ...
The problem with this mindset is that it overlooks the long-standing role of free speech in Australia.

Ms Abdel-Halim should be politely reminded that if you are going to make your home in a country such as Australia, and benefit from all the freedoms on offer in this open and democratic society of ours, you can’t be picky as to how those freedoms apply.
Yes, come here, and we feel to freely bash the shit out of you, and especially to make fun of your children and bully them in the playground for being wogs and furrigners. It's the Australian way. We mean no harm. It's just all jolly good fun in a hockey sticks kind of way, and if you don't like it, we have a friendly saying. Why don't you just fuck off to where you came from, you picky prick.
And if you've got a problem with that, what are ya? Ya want to do it here and now or should we step outside? Hang on a tic, just let me drain the glass so I can smash it and then we can get down to business ...

The right to start debates in an immature way, to be disrespectful and insulting, is among those freedoms.
Funny that. Next time I see rampant graffiti in the streets - oh wait I see it every day in my walks - I'll remember that the money councils spend attempting to eradicate it is a total waste, and the young taggers and street artists are just indulging in their god given freedom.
Oh wait. I forgot. The Daily Telegraph is ceaseless in its unrelenting pursuit of graffiti criminals dressing themselves up in the name of art, when they're just vandals and petty criminals. Stolen keys open the door to graffiti crime, shrieks the latest header in its ongoing campaign.

I am not sure what Mr Redegalli’s mural adds to the debate about whether burqas should be banned. In this country, where people are generally political ambivalent, where we don’t march down the street unless we’re going in a fun run or walking to the footy, Mr Redegalli stands as one of those mildly annoying trouble-makers who makes the rest of us roll our eyes.
Actually it's the confused scribbling of Penberthy and the Punch brigade - vastly titillated by the burqa bashing sign, in much the same way as they would once have been titillated by Pauline Hanson - that causes a roll of the eyes. You see, in the end, it's just a chance to have fun at the expense of Newtown hipsters:

As such, the only people we should really feel sorry for in this little episode are his poor neighbours. They have suddenly found that their once sleepy side-street in hip and groovy Newtown has become the venue for one man’s poorly-painted crusade against a religion that’s still grappling with the pretty simple idea of freedom of speech.
A pretty simple idea of freedom of speech? Well since it's okay according to Penberthy to be insulting and offensive and disrespectful, can we just say that Penbo has a pretty simple minded idea of freedom of speech.
Hmm, this very night I shall stalk the streets of Newtown, spray can in hand, and put up a couple of signs. How about Fuck off Penbo? What about Fuck off Catholics?
Hey, what about a couple of nuns in penguin suits, with a big sign over them - perhaps "say no to nuns" or "say no to the Pope" or "say no to Catholics" or "say no to penguins".
Want a bet how long it would last? No thanks to the Telegraph and its relentless pursuit of gangsta criminals and impertinent councils with their rude insolent attitude to graffiti ...
Phew, come back Andrew Daddo, we loves you and your pooch.
Why don't you take it for a walk and a piss in Camperdown Memorial Rest Park? Cheerfully known to locals as "Dogshit Park".
Oh and there's a wall for your graffiti. Make sure you vent about something, perhaps Penbo, or the Daily Terror or the Punch ... whatever moves you and your dog ...
(Below: evil kids with their evil Ironlak Ned Long Zip hoodies, so valiantly deplored by the Daily Terror in Graffiti kids hide behind bala-hoodie). 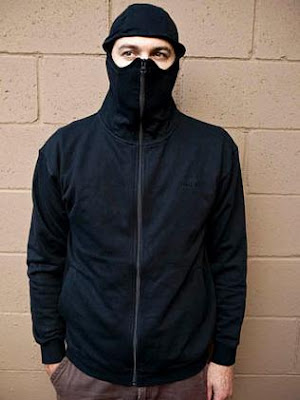