Cardinal Pell and a column from the heart of the nation revealing it's the Anglicans wot done it ... 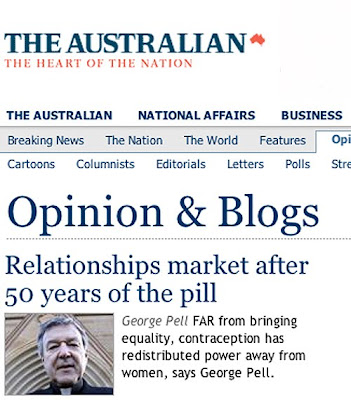 (Above: a moment in time from the heart of the nation. Can't wait to read it, can't be bothered going deeper into the pond when there's a Pell column to be read. Quick, click here, and make sure you collect your bonus set of condoms, prescription for the pill and steak knives).
Like a gift from heaven, the thoughts of Cardinal George Pell unfold like blossoms before our eyes. Is this the manna the prophets speak of?
His subject is women and women's rights, and what a fierce feminist the good Cardinal is.
He starts with a forthright denunciation of Opus Dei and its vile attitude to women, including a most remarkable assault on the thoughts of Saint Josemaría Escrivá de Balaguer
(Escrivá) once wrote, "Wives, you should ask yourself whether you are not forgetting a little about your appearance. Your duty is, and will always be, to take as good care of your appearance as you did before you were married - and it is a duty of justice" Escriva similarly stated that "Women needn’t be scholars - it’s enough for them to be prudent." (here).
Even more extraordinarily, the "feminist Cardinal", as he's known in the antipodes, launched a fierce attack on the Catholic church, and its ongoing patriarchal attitude to women, and its resolute insistence that only men can make that telephone to glory, oh what joy divine, because only they can feel the masculine current moving down the line ...
"Issues such as the authoritarian nature of the church, compulsory celibacy for the clergy, the participation of women in the church, the teaching on sexuality in all aspects cannot be brushed aside," he said. (here).
Oops, we apologise. The lickspittle Murdoch lackey hired to get good quotes got that entirely wrong.
The "he" who muttered those words was Bishop Pat Power, the Catholic auxilliary bishop for Canberra-Goulburn, a well known haven for deviants and Jungian anima lovers. Get from me, you liberal lovers, next thing you know you'll be turning Anglican ...
As usual, the animus is dominant in Pell, and his offering is actually Relationships market after 50 years of the pill, with the intent of the story summarised thus:
Far from bringing equality, contraception has redistributed power away from women, says George Pell.
Dare we re-phrase that?
Far from bringing equality, membership of the Catholic church has redistributed power away from women, for a couple of thousand years, says Cardinal patriarch.
The rest of the Pellist yammering is entirely predictable, with sublime bouts of illogical logic.
While majority opinion regards the pill as a significant social benefit for giving women greater control of their fertility, the consensus is not overwhelming, especially among women.

A May CBS News poll of 591 adult Americans found that 59 per cent of men and 54 per cent of women believed the pill had made women's lives better.
Hah. You see, there's an alleged 5% fewer than men in the opposition camp, concerned at the way the pill has redistributed power away from women and in the Pellist camp.
Of course if you actually visit the CBS poll, you find that the cotton picking cherry picking Pell overlooks some subtle, nuanced qualifiers to the poll, most notably the difference in thinking between younger and older women in relation to the effects of the pill. 69% of the sample 45 and older thought that the pill had made it easier for women to enter the workforce, and among women 45 and older the figure was 64%.
By the way, as you might expect from a poll that size, conducted by phone, the error due to sampling could be plus or minus four percentage points, and the error for subgroups even higher.
But all the same, the pill emerged with its credentials intact, and if you want to read the actual results, as opposed to Pell's cherry picked single statistic, head off here. 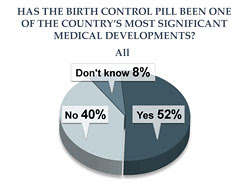 Of course it sometimes startles young women for them to be told that the Catholic church still opposes contraceptive birth control and family planning. If you're not breeding for the Pope, you're simply not doing your duty.
Well whatever lights your wick. If the thoughts of a man who has not lain with a woman for many, if any, years, is your way ahead in terms of understanding men, women, sex, love, pain, relationships, marriage and the whole damn thing, go for it. But between brides and grooms of Christ and Meg Ryan, give me Meg Ryan any day ...
Meanwhile, the rest of us can fall about chortling, as Pell offers up some "straight-forward microeconomic reasoning", courtesy of one Timothy Reichert:
His basic thesis is that the pill has divided what was once a single mating market into two markets.

Because the pill means that participation in the sex market need not result in pregnancy, the costs of having premarital and extra-marital sex have been lowered.
Well send my ears bright pink with shock. The young things are fucking like rabbits, for free, or at least for knock down two dollar prices, not that we did anything like that in my day ...
What follows is Pell's extrapolation, sans statistics, of the conservative Catholic mind set, as applied to women and relationships, and it sends gentle readers reeling back beyond the nineteen fifties. Or perhaps to the days of Jane Austen, when the marriage market was a serious matter for women of pedigree ...
Here's a few of the key talking points:
Evolutionary biology dictates that there will always be more men than women in the sex market. Their natural roles are different. Women take nine months to make a baby, while it takes a man 10 minutes. St Augustine claimed that the sacrament of marriage was developed to constrain men to take an interest in their children.
Take the pill and it'll take a man longer than 10 minutes ... But hey St. Augustine as sociologist clearly knows something about the Greeks and Romans, who strangely somehow managed the institution of marriage without benefit of the teachings of the Jews or the Christians ...
Still, you can see the danger in evolutionary biology and natural roles. Why next thing you'll be laughing at the story of Adam and Eve and biblical literalism and intelligent designers ...
Oops sorry, missing the point again, The point being, that if women play the sex market game poorly, they'll end up on the shelf:
(Below: Carnaby street, wherein the whole of civilisation was undermined, women were crucified, and men got to wear spiffy gear and escape the marriage market by turning themselves into preening peacocks. No wonder women are unhappy). 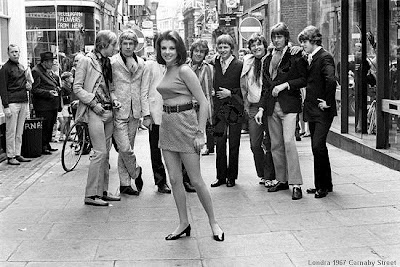 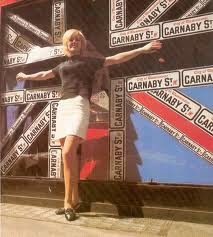