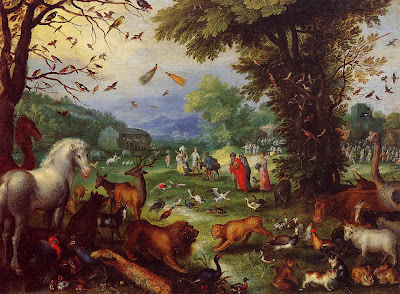 (Above: did god have an anti-western impulse? Jan the elder Brueghel, Landscape of Paradise and the Loading of the Animals in Noah's Ark, 1596).
Tim Blair, in a fine old lather of righteous indignation yet again, this time whipping himself up in his ever reliable totally tedious one trick pony routine about climate change, here.
This time he's outraged about the Associated Press asking independent statistics experts to look at the data, and worse still, these so-called experts then having the cheek to suggest they couldn't find a trend of falling temperatures.
In what is now standard form for Blair, he jumps the shark, by turning to that well known scientist Jonah Golberg.
UPDATE. Beyond temperature disputes, Jonah Goldberg asks:
What possible price would warmists agree is just too high? Right now, greens want to spend trillions of dollars and export our manufacturing base to China and India in a foolish attempt to slightly ameliorate global warming. But it certainly seems that that’s just the opening bid. If democracy is worth sacrificing, and dogs, cats, and unborn children are up for discussion, where is the line we will not cross?

What is the price we can all agree just isn’t worth paying?

Newsflash: the United States exported its manufacturing base to China years ago, and now happily forages in Wal Marts full of goods manufactured in China. And try getting a job in a call centre outside India.
But then it gets even richer:
For eight years during the war on terror liberals routinely argued that if we made even the slightest changes to our lifestyles in response to a very real terror threat, “the terrorists will have won.” But altering or outright chucking overboard the core of our liberties and lives to fight global warming is progressive, smart and right. I find that baffling.

Blair, having revealed elsewhere that he went off on an anti-nuclear demonstration in an attempt to appeal to a girlfriend, then does a Jiminy Cricket and chirrups:
Not really. Both responses are driven by the same anti-Western impulse.
Yep, climate change is anti-western and an impulse roughly equivalent to every evil impulse under the sun, like terrorism, or should that simply be called every liberal impulse under the sun?
The question is, if fundamentalist religious types who preach the gospel of climate change are mad, what does that make the fundamentalist religious types who preach the gospel of scepticism with equal religiosity and fervor?
Well for a start they clearly have deep Freudian anxieties about anti-Western impulses.
How about a re-write?
What possible price would sceptics agree is just too high? Right now, protectionsts want to spend trillions of dollars propping up the United States manufacturing and agricultural base in a foolish attempt to pork barrel, while wondering why we should bother to spend a dime to slightly ameliorate a non-existent threat, which being non-existent can't be ameliorated. And it certainly seems that that’s just the opening bid as banking bonus season gets back into full swing. If democracy is worth sacrificing, and dogs, cats, and unborn children are up for drowning under a Noah's Ark like flood as the ice caps melt, where is the line we will not cross?
What's the price we can all agree isn't worth paying about a non-existent threat - zero dollars? - so we can keep on shoveling shit down the throats of the rich, so that eventually some gruel might trickle the way of the poor.
A stupid rhetorical question? You betcha. Any stupider than Goldberg's stupid rhetorical question? Not really.
Meanwhile, better get over your love of tuna in sushi, or at least be prepared to earn squillions to pay for the taste treat.
It's hard not to think of Tim Blair as the climate change sceptics' Tim Flannery.
Climate change not as science but as an anti-western impulse? Someone's hiding the tuna under the haystack, and when they come out won't the Japanese be pleased and the liberals will be mortified?
Blair should go eat some lentils for a week to discover a real pulse ...
(Below: no tuna eating for lentil lovers, as we move to feed nine billion people. Won't someone think of the anti-western pulses in The Young Ones?) 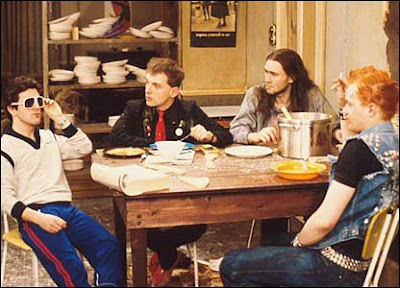