Miranda Devine, nose to tail eating and a little Rabelais to finish off the meal 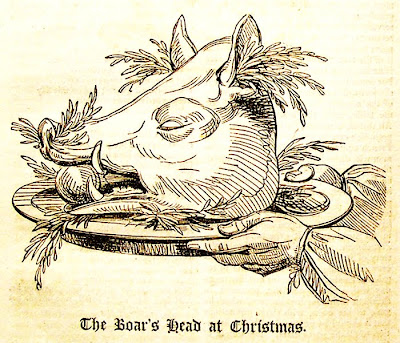 Oh eek and oik and erk to you. And get out into the world, at least a little past three vegies and a good rump steak.
MasterChef contestant Chris was a favourite of the judges precisely because he liked nose-to-tail eating, with the extra ingredient of beer.

He once created a dish out of a whole pig's head, nose, cheeks, ears and all, roasted, with vegetables.

The judges pronounced it superb.

So? Give it a go, or walk away. Don't emote with the quelle horreur routine, it isn't funny, it's antipodean tragic.
Chris is going to open a restaurant devoted to this kind of gross gastronomy, plus beer. The judges say they can't wait. My father was a great offal eater, the only one in our family. He liked kidneys and brains, but his favourite was tongue, served cold. My sister once was preparing his lunch and opened a can of tongue, not realising it was an actual tongue, a quivering pink organ, complete with taste buds, looking exactly like a human tongue, only bigger. All we heard from the other room was a shriek and a thump as she fainted.

Quelle horreur!
Fortunately my grandfather was a great offal eater, not the only one in the family (my father as well), and from him I acquired a taste for kidneys in particular, though I could never get past the gristle in pigs' trotters, even if the taste - as any part of a pig must be - was more than acceptable. We also ate squab back in the days when it was called pigeon - another penance of the poor shared with kings and potentates, though the treatment of small birds for the rich can involve extraordinary processing. My mother cooked some of these things with great reluctance, but it's hard to turn away from the flesh of a freshly caught eel, no matter how the creature might look.
Never mind, a willingness to eat snake, or try crocodile, or have a little camel curry, or goat, or whatever, became a kind of flash back to my grandfather's love of offal, and so shifting over to Japanese cuisine became inevitable, though western sensibilities can be offended by the sight of turtles sitting alive in a container waiting to be turned into turtle steaks and turtle soup.
Naturally the Devine is horrified by the vile ways of the Japanese:
Visiting another sister in Tokyo last year, my family dined at a shabu shabu restaurant with no English menu or English-speaking waiters. We pointed at the fragrant bubbling pot on the table next door and in broken Japanese explained that was what we wanted to eat. The waiters seemed surprised and tried to dissuade us. No, that was what we wanted. And that was what we got.

The bunsen burner arrived with the pot of broth and a side dish of herbage. So far so good. On the boil we plunged in the veggies and ladled ourselves out the delicious smelling concoction. Mmmmm … until the faces around the table changed slowly, from contentment to wonder, to abject disgust.

In our mouths was a meat of indeterminate origin. Meat was too fine a description, really. It was morsels of gristle, slightly spongy, tasteless, but with a faint je ne sais quoi that made the tongue recoil in horror.

We paid the bill quickly and left, slight quivers of suppressed mirth from the staff as we retreated the only hint that something was amiss. Back home, my sister coolly informed us we had eaten chicken arseholes. Why, oh why?

Well it's not a complicated answer. Because some people like the taste, and eating food you like well cooked is not only good for you, it keeps the motor running. But the Devine wants to find only disgust:
This is the eternal question of non-offal eaters. To offal-eaters disgusting food is an adventure. It is their Everest. The more inventive the better.

They hear of a penis restaurant in China and rather than run away with flailing arms at the horror of it, they book the next flight to Beijing.

Yes, Guolizhuang Restaurant in Beijing specialises exclusively in steamed, roasted, boiled, peeled or shredded penises and testicles with savoury dipping sauces. The Times of London reporter who dined there last year described "a bizarre feeling of nausea in my groin" as the chef sliced off the tip of a yak's impressive member.

Well if you don't like it, don't do it, and leave it to those who do like it, and leave off the talk of bizarre and disgusting and nauseating, as if the world needs moral disapproval on every level that neo-conservatives can manage.
Despite the obvious downsides, there is currently a worldwide boom in offal eating, with Time magazine charting a surge in Europe over the past five years and US restaurant consultants Joseph Baum & Michael Whiteman Co. highlighting offal as one of the top trends for restaurants in 2009. It is good news for gastronomic adventurers.

But you are either an offal-eater or not, and never the twain shall meet. The former usually feel sorry, inexplicably, for the latter and the latter think the former are insane. Sure, you can make tyre rubber taste good if you add enough condiments, but would you want to eat it?
Hmm, does this mean that the Devine is going to officially join the animal rights lobby? You know, end cruelty to animals and also end cruelty to faint hearted souls who can't look a bit of gristle in the eye without thinking of tyre rubber?
Well bum and bugger to all that. Narrow minds lead to narrow tastes.
Another thing I learned at an early age came from reading Rabelais's Gargantua and Pantagruel, here:
... to conclude, I say and maintain, that of all torcheculs, arsewisps, bumfodders, tail-napkins, bunghole cleansers, and wipe-breeches, there is none in the world comparable to the neck of a goose, that is well downed, if you hold her head betwixt your legs. And believe me therein upon mine honour, for you will thereby feel in your nockhole a most wonderful pleasure, both in regard of the softness of the said down and of the temporate heat of the goose, which is easily communicated to the bum-gut and the rest the inwards, in so far as to come even to the regions of the heart and brains. And think not that the felicity of the heroes and demigods in the Elysian fields consisteth either in their asphodel, ambrosia, or nectar, as our old women here used to say; but in this, according to my judgment, that they wipe their tails with the neck of a goose, holding her head betwixt their legs, and such is the opinion of Master John of Scotland, alias Scotus.
Oh dear, reading all that medieval cookery has made me go all bawdy and wench like. Well let's not leave off, but let's unleash Rabelais directly on to Miranda the Devine, and those who would enjoin us not to eat beans for fear of farting in public:
... for you may take it for a truth granted among all professors in the science of good eating, that he enjoined you not to taste of them only with the same kind intent that a certain fresh-water physician had when he did forbid to Amer, late Lord of Camelotiere, kinsman to the lawyer of that name, the wing of the partridge, the rump of the chicken, and the neck of the pigeon, saying, Ala mala, rumpum dubium, collum bonum, pelle remota. For the duncical dog-leech was so selfish as to reserve them for his own dainty chops, and allowed his poor patients little more than the bare bones to pick, lest they should overload their squeamish stomachs.

To the heathen philosopher succeeded a pack of Capuchins, monks who forbid us the use of beans, that is, Pantagruelian books. They seem to follow the example of Philoxenus and Gnatho, one of whom was a Sicilian of fulsome memory, the ancient master-builders of their monastic cram-gut voluptuousness, who, when some dainty bit was served up at a feast, filthily used to spit on it, that none but their nasty selves might have the stomach to eat of it, though their liquorish chops watered never so much after it.

So those hideous, snotty, phthisicky, eaves-dropping, musty, moving forms of mortification, both in public and private, curse those dainty books, and like toads spit their venom upon them.
Hmm, toads spitting venom? I wonder what they taste like? Is it true that people lick cane toads, and either get high or die?
I guess it's better than reading Miranda the Devine, to get low or cry ... but there you go, Roman and medieval cooking ... another thing to blame on the greenies ...
(By the way, if you want to cook ostrich Roman style, why not go here, and if you want to do more medieval or period recipes, just google away. Seems like the intertubes is just one vast foodie network).
(Below: every suburban latte sipping chardonnay swallowing gourmand is just waiting to feast on coqz heaumez, details here). 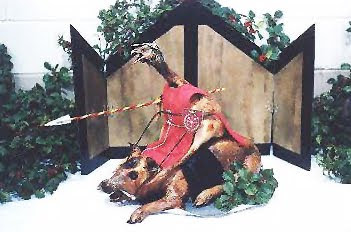