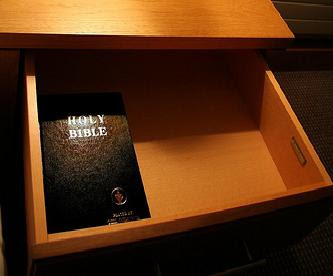 (Above: essential new equipment for boat people).
Miranda the Devine is at it again, this time with Liberty tested on river Nile.
Arriving a little late to a scene already explored with vile, fear mongering thoroughness by Paul Sheehan in Rudd's policies make us a soft target, (the header says it all), she runs through the now standard mantra of how it's a boom time for people smugglers, the smell of vindication is in the air, it's all the fault of the Rudd government, and then, as if to offer up firm evidence that she's in the whacky camp, lines herself up with Mr. Whacko, Fred Nile.
Noting that Australians are concerned about unauthorised asylum seekers coming to Australia by boat, Devine takes a pot shot at people who tend to shoot off at the mouth in newspaper columns with really dumb proposals - that's right, the chattering privileged elitist 'money in the bank for chattering' class known as commentariat columnists:
Hypocritical posturing, doing one thing while saying the opposite, is an insult to voters, underpinned by the favourite false assumption of the chattering classes that the majority of Australians are racist rednecks.
Which doesn't leave much room for the favourite false assumption of chattering commentariat columnists about the chattering classes which is how they sit around sipping chardonnay and drinking latte as they denounce the majority of racist redneck Australians ... but what the hell, caricatures and slurs are always easier than actual substantive insights.
Hey ho, nonny no, on we go, so how about an example of hypocritical posturing?
If Rudd really wanted to show compassion he would back the audacious plan of the Christian Democrat Fred Nile and go into the people smuggling business.

That's right, the solution to people smuggling is ... people smuggling.
Hosting a meeting yesterday at NSW Parliament House for Christians from Egypt, Iran and Iraq, the upper house MP said he was worried about the plight of Christians in the Middle East, who were desperate to come here and make good migrants. In Iraq, says the Catholic charity Aid to the Church in Need, there are only 400,000 Christians left, down from 1.4 million in 1987. Australia has a special responsibility for the Iraqi people, and from a self-interested viewpoint, Christians are likely to settle more easily into a Christian country than Muslims.

"It's a desperate situation," said Nile. "They're being told 'convert or die'."

Seeing how free and easy the Government has become with boat people, Nile has hatched a plan to bring a boat of 2000 Christian asylum seekers from Indonesia to Australia. He wants donations and he dares the Government to stop him.

So how about it?
Great, great, that should teach the people smugglers a lesson or two.
(1) Make sure you hold up a sign saying you're a persecuted Christian when in view of the western media.
(2) Put images of the cross and Christ and carry a Gideon bible while on any boat making the crossing.
(3) Sign as a way of endorsing a copy of the Christian Democratic Party's policies for the 2004 Federal Election as enunciated here.
NB: application for membership of the CDP upon arrival in Australia will be viewed favorably.
(4) Amend the CDP's immigration policy as follows:
IMMIGRATION

It is the sovereign right of any nation to determine who does and who does not enter its borders for temporary or permanent stay (except and insofar as people are Christians). The operations of people smugglers should continue to be disrupted and frustrated so that the business becomes commercially unviable (except and insofar as the people smugglers are authorized by Miranda the Devine and the Rev Fred Nile). Australia should continue to meet its international obligations to treat unauthorised arrivals humanely and to consider any claims they make for refugee status (provided that anyone not Christian shall automatically be excluded or at least put right down the bottom of the heap). Persons who arrive illegally and make claims for protection that are proven false should be removed from Australia as soon as practicable, except if they can provide evidence by way of a Gideon bible or prove by a protestation of faith that they are Christian, but not of the troublesome, disruptive, splitter, schismatic kind of Christianity, but rather a follower of the CDP and Fred Nile.

Mandatory detention should continue for all persons without authority to be in Australia, unless they are Christian, in which case they may be given Sunday off and allowed to attend services by Fred Nile or a nominated delegate. Further legislation that does not impinge upon natural justice should be passed to prevent the abuse of the judicial process that extends the stay of persons who have no entitlement to be in Australia, with particular reference to the need to give Christians a fair go and a pie with lots of dead horse.

Australia should continue to be a world leader in being a generous haven for genuine refugees through internationally supervised and orderly refugee resettlement programs, provided that Christians are prioritized at all times, and agree to become members of the CDP. Priority should be given to refugee applicants who are most likely to readily integrate into the Australian way of life, and to avoid any misunderstanding, this means Christians, and specifically excludes Islamics, secularists, atheists, agnostics, homosexuals (including lesbians and exponents of gay marriage), greenies, ambitious non-believing entrepreneurial capitalist schemers, and would-be members of the chattering classes insofar as they might attempt to present alternative views to those of Fred Nile, the CDP and Miranda the Devine.
So how about it? Technicalities all resolved, and everybody ready to go.
You know if it weren't for the tragedies being experienced on a daily basis by people caught up in assorted follies and wars, civil and international, the sort of hypocritical posturing indulged in by Miranda the Devine in her column would be seen as comical and faintly ridiculous. In the old days, a short period in the stocks might have helped cure such recalcitrance.
Given the actual suffering of people, as well as being vaguely preposterous, it's more than slightly offensive, just as the return of Philip Ruddock to centre stage is even more offensive (Get tough or prepare for a flood).
About the only thing Ruddock managed during his time in power - apart from a monotonous monotone and a capacity to abuse refugees - was to single handedly discredit Amnesty International as a meaningful political force in Australia, by wearing its badge and thereby boasting of his membership, while carrying out policies distinctly different to those of the organisation (and which resulted in the occasional futile flap and squawk from Amnesty which only further emphasized its complete impotence - here).
Was it only a couple of years ago that Rob Hulls could write the following in Time to live up to the badge?
Never has so small a piece of unassuming metal seemed so incongruous, so palpably lost, as it did on SBS's Insight this week. Adrift in a sea of pinstripe and hollow words, Philip Ruddock's Amnesty badge served as a tiny but potent reminder of the absurdity playing out before us. Did its bearer shift uncomfortably when asked about the contradiction it represented?
Not only has Ruddock strayed impossibly far from the values it promotes, but more importantly he has abdicated his responsibilities as our nation's Attorney-General — the one person charged most solemnly with the defence of the principles of our legal system and the legal rights of Australian citizens.

Hypocritical posturing? Yep, been there and done that, and Miranda the Devine, with her new crusade, clash of civilizations, won't someone save the Christians routine, so let's get into boat smuggling Christians - at best an idle, childish, insolent, devious provocation - shows she's just as adept as Ruddock at the game ...
(Below: Philip Ruddock wearing a badge, and further below Fred Nile asking god to forgive Sydney, because there's no way Fred Nile can forgive Sydney ...) 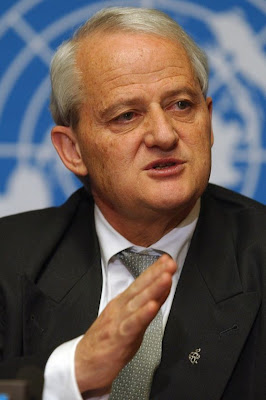 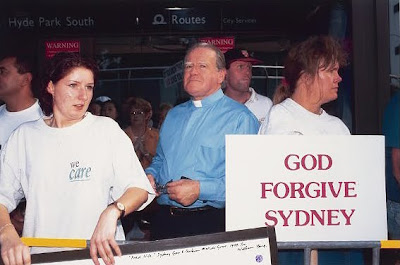