Lucy Kippist, the Elgin marbles, and troubling times for Chairman Rupert in a world where possession is nine tenths of the law 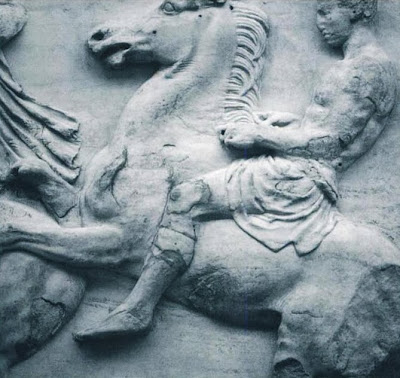 (Above: detail from the Elgin marbles, which truth to tell should be called the Parthenon marbles or the Acropolis marbles, unless you happen to think it more appropriate to name goods after the thief that stole them rather than the home that housed them).
It's always interesting the way strands intersect on the subject of intellectual property, and ownership rights.
There's poor Rupert Murdoch desperate to preserve his rights and demand payment for access, and there's bystanders ready to decry him.
Murdoch has lost his magic touch at News Corp, gloats Roy Greenslade in the Daily Mail, noting that News Corp dropped £2.13 billion last year, and that a lot was due to Murdoch's clumsy efforts to corral the intertubes:
Fox Interactive Media, the digital arm of Murdoch's company, had lost a bucket of money. MySpace, the social networking site, was alone responsible for a loss of £227 million to the bottom line.
This was hardly a surprise. Almost from the moment News Corp acquired MySpace for £363 million in 2005, it began to lag behind Facebook. Then Bebo began to catch up. Finally came Twitter. It was clear that Murdoch had bought a digital pup and, as with Dow Jones, had overpaid for it.
It's sobering to recall that Fox Interactive spent about £880 million in 2005 alone in acquiring websites, most of which have come to naught.

With traditional newsprint in freefall, and advertising down, what to do?

... he appears to have lost his cool by adopting a strategy to escape his problems that is anything but guaranteed to reverse his fortunes.

He is aiming to charge people for access to his websites. He has declared war on the search engines and aggregators. The mogul has decided to play King Canute.

To bring this about he is hoping to persuade other publishers to join him or, at least, follow his lead. Whether this quasi-cartelisation happens or not, he is determined to go it alone.

Within Wapping, where Murdoch's decision to split the web presences of The Times and Sunday Times has already caused untold chaos and expense because of the work involved, there is now consternation about the building of pay walls.

One senior executive, who agrees with Murdoch about the problems caused by Google and the free transmission of editorial material, told me: “None of us can see how charging for content will work in practice.”
Well there's content you can charge for, and then there's content you should give away for free, and then there's just chaff bag filler as students go about the business of learning to be journalists, as Lucy Kippist seems to be doing in The Punch, Chairman Rupert's foray into antipodean digital content, with Museums should be allowed to keep their artefacts.
The argument over museums keeping artefacts looted or stolen or purloined or 'acquired' from other countries isn't simple, but Kippist manages to reduce a complex subject to simplistic gabble.
It seems because she once worked in the downstairs gift shop of the British Museum in London, it's entirely reasonable for the museum to keep hold of the Elgin marbles, and anything else it might have acquired by dubious means.
Now looting was and is a popular pastime in Europe. Where would the Louvre's collection be without Napoleon? Where would the Getty be without some sharp edged purchasing strategies? And you can multiply the examples of looting, and dubious museum practices by the hundreds.
But even a cursory student of looting might pause to think when confronted by the Nazis' looting of Europe, perhaps best symbolized by the assiduous collections put together by Hitler for his future museum, and by Goebbels for his personal glory.
Come to think of it, Lord Elgin was the same kind of looter, fixated on what was right for him and his kind and never mind the original country in which the works resided. Think of the British imperium as a world in which looting is a jolly good thing, if you happen to be the looter, never mind the lootee.
Kippist seems to be offended by the mildly astonishing fact that so many countries are asking for their treasures back, with Egypt joining China, Italy, Greece and others in asking that some of their artefacts be returned (never mind that she doesn't seem to understand the possessory implications of using the word 'their').
Kippist is shocked. Why should they give the pieces back?
... the great European museums like the Louvre or The British Museum were designed as places of reflection, to record humanity’s achievements and the evolution of civilisation.

Great if you happen to live in England or France, and a trip to the museum is a jolly way to spend the weekend. Nice if you want to encourage the tourist trade to drop their sweet dollars in your backyard. Pity about the Greeks, but I guess - from a British point of view - there's no reason why they can't take a Ryan Air flight to see the works of their ancestors.
What good is a museum without artefacts? And what’s a collection stripped bare because the place where you found something decides they want it back.

Time magazine reported that ‘source’ countries like Italy and Greece consider antiquities national property ‘essential to the construction of the modern nations’.

The selfish blighters!
But isn’t that just a little outdated? People of all cultures are spread throughout the world, aern’t these artefacts just as important as symbols of humanity.

Italy and Greece have both waged vigorous campaigns against museums in America and the United Kingdom.

Since 2006 Italy has repatriated approximately 65 artefacts from US museums while the Greeks are infamous for their battle to get the Elgin Marbles back from The British Museum.

The infamous Greeks? Well in his day Elgin was regarded as a villain, a cad, a bounder and a thief. Byron didn't have much time for him for starters:
Dull is the eye that will not weep to see
Thy walls defaced, thy mouldering shrines removed
By British hands, which it had best behoved
To guard those relics ne'er to be restored.
Curst be the hour when from their isle they roved,
And once again thy hapless bosom gored,
And snatch'd thy shrinking gods to northern climes abhorred!
Sir John Newport also took a view:
"The Honourable Lord has taken advantage of the most unjustifiable means and has committed the most flagrant pillages. It was, it seems, fatal that a representative of our country loot those objects that the Turks and other barbarians had considered sacred." (here)
Kippist doesn't even bother to mount an argument about how the primitives wouldn't have managed to look after the artefacts as well as the English, which is just as well, since the artefacts held in London suffered damaged from urban pollution, not to mention cleaning methods employed by British Museum staff.
No, it's just a matter of keeping things the way they are, from a Eurocentric and American point of view:
... I think they’re all missing the point.

Museums are about people and as Richard Lacayo writes it’s the museum goers- who get to see some of the world’s greatest treasures without having to afford to visit the country- that have the most to lose.

What better way to teach tolerance and understanding of difference than to share the history of a culture with as many people as possible.

Leave them the way they are.

Tolerance and understanding and sharing? But putting something on view in Greece isn't sharing?
There are serious articles on the subject - even the Richard Lacayo article in Time - Who Own's History - that Kippist references is more adept at putting the pro and con points of view in relation to looting, site destruction, and who might get what from archaelogical digs. And it too is free, digital content roaming the intertubes and only a click away.
If you want to pay for your content, you might go to read Hugh Eakin's A Reporter at Large, Treasure Hunt, which explored the fuss about the Getty, and the murky provenance surrounding an Aphrodite statue, and the resulting indictment and resignation of curator of antiquities Marion True - a story worthy of a Maltese Falcon (I almost said Dan Brown, but didn't want to weaken the case).
If you want a whiff of Christopher Hitchens on The Elgin Marbles, Should they be returned to Greece, you can find excerpts from his book on Google here.
And that's where Rupert Murdoch has a problem. The content at The Punch simply isn't up to the standard required to extract money from the punters. And if you're going to pay, you may as well pay for quality specialized content, because there's a lot of blather and opinion out in the world, freely available.
Well two things seem obvious - if you believe in the theft of intellectual property, and the benefits of a free stolen lunch, then the colonial British should have the Elgin marbles stay with them in their museum forever - never to be prized from their cold dead hands by the infamous Greeks.
And just as looting artefacts is a way of life for some, so Rupert Murdoch is going to discover that the pirates of the world have made their choice, and it's for free content.
Not that I'm saying returning the Elgin marbles to the infamous Greeks will turn things around. Maybe it's more just a matter of what goes around comes around ...
It's a funny old world, but if possession is nine tenths of the law, I guess I'll just go get myself some digital files to possess ...
(Below: stolen goods). 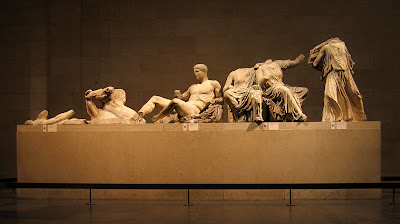