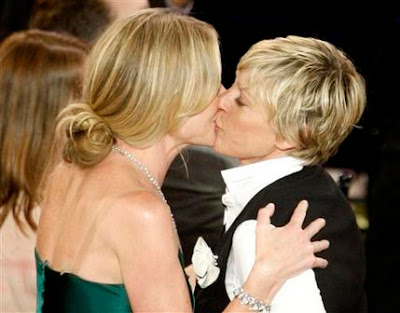 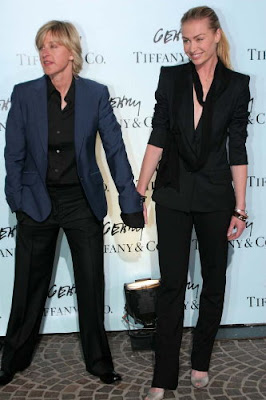 (Above: oh no, not kissing in public, and both wearing suits in a sexually confused way, and one of them's Australian. How broken is this!)
One of the unfortunate aspects of the new National Times format in the SMH is that strange aberrant creatures from down south - we're thinking this time of Lawrence Money - have crept north from The Age for the spring. And might even hang around like a bad smell for the summer.
Money's contribution - Can gays really be straightened out? - is a marvel of antediluvian befuddled thinking, and when it all comes out in the wash, not much different to the good old days of taking a baseball bat to deal with perverted homosexuals. Just a little more scientific in an Inquisitorial kind of way:
Conversion therapy remains a highly contentious issue despite warnings from numerous professional bodies that a number of treatments can cause physical and emotional harm to participants. Treatments can involve electroshock therapy, a form of aversion therapy where patients are shown nude images of men or women and are psychologically “trained” through repeated shocking to associate the image with pain.

Other treatments succeed in reducing homosexual behaviour rather than increasing heterosexual attraction. According to one research paper published by the University of California, many “ex-gay” therapies work by “[depriving] patients of their capacity for sexual response to others.” (here).

One of the oldest verbal baseball bats is that homosexuality is a preventible sickness, a disease. So people cross over, begin to live the homosexual lifestyle, are 'affected' by homosexuality, and need to be cured, preferably in the process being converted to fundamentalist Christianity. That way they can obtain freedom from homosexuality, and perhaps the world might also be made free of paedophilia (what's that you say, heterosexuals molest children? Oh no, say it ain't so).
Money begins his journey into this thicket of prejudice by managing to conflate homosexuality, bisexuality and heterosexuality:
A 30-something pal sent me a ‘‘Happy Father’s Day’’ SMS this year. ‘‘What was that all about?’’ I asked. She told me her father, who had turned gay years ago and gone to live with a man, had disappointed her once too often with empty plans and promises. She wanted to ''adopt’’ me as a sort of foster dad. (as if I don’t have enough on my plate).

Her spat with him is nothing to do with his ''gayness’’ but she is walking evidence that her dad is not gay, he’s bisexual. If you can father a child by a woman, that’s heterosexuality by definition. Her papa had crossed the sexual divide.

You see? Turned gay - and not that we object to his gayness (what a bloody disappointment) but he's a bisexual, and all he'd done - as a matter of wilful personal indulgence and perversity - is cross the sexual divide.
As a summary of another's life - without any voice from that life - it's as low a character assassination as could be indulged in, but never mind, Money has the solution. He's got the cure for the disease, and no it doesn't come from professional gay agitators who always seem to have their knickers in a knot.
It was only a few weeks earlier that I received an angry email from a bloke named Tim Wright. He had his knickers in a knot over a mob called Exodus Global Alliance which, he said, claimed on its web site that ‘‘change is possible for the homosexual through the transforming power of Jesus Christ’’. Exodus was holding a conference in Melbourne with expert speakers who would inform participants that ‘‘they don’t have to lead the homosexual lifestyle’’.
Wright said that this had ‘‘angered gay rights activists’’ and they would stage a protest outside the conference as the participants arrived. ‘‘You can’t choose to become straight because your religious leaders tell you that homosexuality is a sin,’’ honked Wright.

Well of course with that kind of radical agitation, you can be sure that Money honked like a goose in the opposite direction. He's shocked that anyone might get upset about a simple characterization of homosexuality as at worst a disease, at best, a tainted perverted deviant broken lifestyle choice.
It seems these outrageous honkers honk at the honking Money that if your church rejects you because of your sexuality, you should reject your church. Closets are for clothes, not people.
Sure enough, there was a small item in the tabloid press a few days later, ‘‘Clash over gay pray’’, which told of ‘‘a dozen protesters’’ clashing with conference attendees at the Mitcham Baptist church. It also quoted an organiser of the conference, Shirley Baskett, who said she used to be a lesbian and wanted to help others to ‘‘choose the right path’’. Said Baskettt: ‘‘It can be very confusing to have these feelings. We are giving troubled church members a place to speak about what they are going through.’’

Apparently Baskett had done the impossible: she had ''chosen to become straight''. As indeed have many others, one of the most controversial being JoAnn Loulan, a lesbian psychotherapist on the board of the American Psychiatric Association, an organisation that removed homosexuality from its list of mental illnesses after heavy lobbying by the gay push (it was the ''you can't choose'' argument). But then in 1997 Loulan upturned the applecart and announced that she'd fallen in love with a man.

Well you can see where Money's coming from. He's clearly still back there in the good old days when homosexuality was listed as a mental illness, and was only retrieved from this fate by heavy lobbying from a gay push using a specious 'you can't choose' argument. By golly, in those days people stayed in the closet, and if they wouldn't, you either pushed them there, or you tarred and feathered them. Yep, back then you could be a man and indulge in a little bashing and people would even cheer you along.
Sob, all gone now, or going.
But hey, just quoting a couple of converts to good old heterosexuality isn't enough for Money. How about a heavyweight showbiz personality?
Then there’s the problem of Ellen DeGeneres, who told the Oprah Winfrey show: ‘‘I wasn’t gay’’ before she flipped and turned lesbian with Ann Heche (although that fizzled out in four years). According to The Advocate newspaper, sociologist Paula Rust found that up to 90% of women who identify themselves as lesbians have had sex with men and that nearly 65% say that they’re at least somewhat attracted to men. Hmm, that's inconvenient.

I'm not exactly sure who it's inconvenient to, or what exactly it proves, or how it has much to do with homosexuality. After all, heterosexuality endurance in relationships is a matter of record. Divorce is so rare as to be imperceptible.
Perhaps at some time Money might care to examine 'Greek love' as it existed in the times of the ancient Greeks - he might start with an excellent article by G. W. Bowerstock in a recent New York Review of Books reviewing a couple of books on the Greeks and Greek love by James Davidson, Andrew Lear and Eva Cantarella.
But I digress - the notion that homosexuality is an inevitable aspect of human sexuality, and has been around for a lot longer than Christianity is neither here nor there in the world of Money. Not when he can lash out at the living agitators:
The Mitcham conference has since featured on a website called TWO (Truth Wins Out) where the ubiquitous Mr Wright bobs up again , banging on about gays ‘‘not being able to choose’’. TWO has a video clip too showing a bloke who endured the state of ‘‘being gay in a heterosexual marriage’’ because homosexuals were victimised, attacked and ridiculed in the 1960s and he was scared off.

Well Money seemed capable of linking to an article about Ellen DeGeneres, but incapable of finding a link to Truth Wins Out.
And if he'd bothered to read the story about DeGeneres, he would have found in this discussion of the notion of fluid sexuality a few other realities:
The problem wasn’t the idea that homosexuality is a biological, innate trait. That seems to be a well-accepted concept nowadays.
Well not so well-accepted by the likes of Money or the folks at Exodus Global Alliance. Money's choice of words takes me back to the nineteen fifties, to jokes about turd burglars and other moral panics dressed up as humor.
Eventually this bloke crossed the divide, just like Baskett and Loulan crossed the other way. Were there heterosexual campaigners chanting and jeering at him? Nope. Was he told he ‘‘couldn't choose’’? No. What business is it of the gay rights people to harrass a homosexual who feels he/she wants to live a heterosexual life? If a peaceful church organisation wants to help them open the door, it’s none of the gays’ damn business.
Well actually when a church group runs a campaign - echoed by Money - that gayness is just a matter of jumping the divide and can be straightened out, that being gay is somehow an unfortunate disease, a mental illness, a kind of broken-ness, it is their damn business. If somebody told me it was wrong to be gay, my first instinct might be to say well it's wrong to be Christian. But my second most likely would be 'fuck you', especially when you phrase the discussion around the need to chose Jesus and combat any same sex attraction you might be feeling (War of words over gay protest).
Money's a dinosaur, the kind of dinosaur that still infests certain areas of the media, and if Fairfax thinks this level of writing is the way to persuade people to fork over hard won cash for digital content, they shouldn't expect too much excitement in the pink dollar sector. Because calling homosexuality "broken" sexuality is just verbal baseball bat much from an earlier time ...
As you might expect, Money's got form on this subject. You can for example find him trilling about same sex marriage back here, getting upset about statistics in support of same sex marriage in Australia (even though those suspect stats have been replicated in other surveys). There's the same smarmy kind of joke making, about Jack marrying Joe, or Doreen slipping a wedding ring on the finger of beautiful Barbs.
Perhaps it's about time moral poofter bashers of the Christian and Lawrence Money kind got over it ...
Postscript: If you want a full on whiff of what Exodus Alliance is all about, you can take a trip into the trough where the problem of "sexual brokenness" is discussed in a Q and A here, so ripe with mis-information, bigotry, condescension, and outright arrant nonsense it will remind many of exactly why fundamentalist Christians are the problem, and the notion that religion poisons everything is the cure ...
(Below: Lawrence Money and the kind of photo you can find in his blog here. What a card, but is that a male hand holding the root vegetable, or is it a safely heteosexual "trouser snake". What a card).