Halloween, and a warning to the young and old 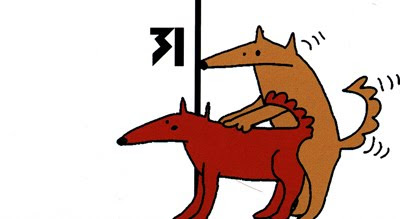 (Above: a disturbing image for an alarming date in the calendar).
Sometimes there's a time to write, and sometimes it's enough to pass on a warning. Pastor Danny Nalliah hasn't approved this message, nor Peter Costello for that matter, but I'm sure they both would if they could.
Fortunately the Australian Christian Lobby is there to help us. And aren't you pleased in a jim dandy way to know that Chairman Rudd will be the keynote speaker at the ACL's National Conference on Saturday 21st November 2009? (here). What a fine crowing and cavilling of Christians that will be on the theme "Building a Nation of Character", with the sub-theme of "The Best Interests of the Child" in public policy.
I can hardly wait - perhaps I should play 'spot the difference between Chairmans Rudd and Howard' - but back to the danger at hand.
You will know - if you have your First Dog in the Moon calendar handy - that Halloween will soon be on us (strangely First Dog has chosen to illustrate this moment with a cartoon of two dogs fucking - more First Dog here).
Yes in nigh on a week the fabled pagan festival will be upon us, and the cult of satanism will obtain fresh power and energy. But what does it all mean?
Well as always the ACL is here to help with Halloween: Is it for real?
... Halloween in our culture has become an odd mixture of tributes to Draculas and roaming spirits, TV superheroes and comic characters, and participation in innocent harvest festivals and costume parties. Through the centuries, Christians of most persuasions have tried to transform this pagan holiday into a Christian one. How does one take a genuinely Christian stance today?

"Trick or treating" becomes a special problem. Children love the adventure of going out in costumes, but some parents have rejected trick or treating entirely. They argue that no matter how universal and supposedly harmless, "blackmailing neighbors for candy" is hardly appropriate. Instead, some create a wide variety of wholesome parties. Others carefully supervise their children as they canvass the neighborhood, perhaps having them add "God bless you" to their thanks for treats.

God bless you sweets-giving pagans one and all.
Well ever alert to the dangers and perils that threaten the thinking Ned Flanders as they make their way through a world populated with deviants, perverts, pagans and sexualists, I offer a few clippings from a terribly informative pamphlet down below.
You will note from the text that it was only when the pagan Celts landed in America that the terrible superstition of Halloween flourished in America. Now that superstition has come to Australia from America, as clearly the pagan Celts who landed in this country lacked imaginative powers (and that's why Hollywood rules the world, and Australian films suck? Perhaps a thesis for another time).
Back on message. Please, lock up your children, buy them no treats, fall for no tricks. Satan is within ear shot, and your mortal soul is at risk.
Lordy, I feel so much better now, having saved the world and secured loon pond's ongoing reputation as the home for the most important messages involving the imminent decline and fall of western civilization.
Remember, alert and alarmed, and if imperiled by a roaming ghost, witch, evil spirit or pagan, here's hoping a simple 'god bless you, merry gentleman! May nothing you dismay' will make them think it's really Christmas.
UPDATE: the Satanists are now peddling their American derived wares over at The Paunch. Trick, treat, or opt out? is the header as Caro Webster pleads with Australians to join in American satan-worshipping.
I am committed whenever possible, to supporting any activity that encourages children and parents to spend time outside, be it directly connecting with nature or taking a simple stroll around your suburb. Halloween gets a big tick on both these counts.

It’s like a giant street party, tempting our children to get out and about in their local community, greeting neighbours they may only see once a year. It stimulates a connection with nature by default. It affords the opportunity to talk to your kids about history, harvests, growing your own food, the celebration of bounty and the cycles of life. And it is a great time to have a go at some nature craft activities (non-season dependent!).

(Below: an American pamphlet of indeterminate age which reveals all). 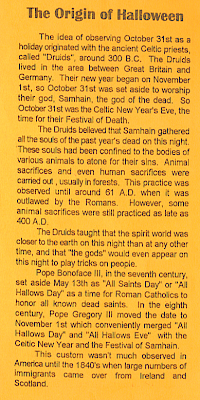 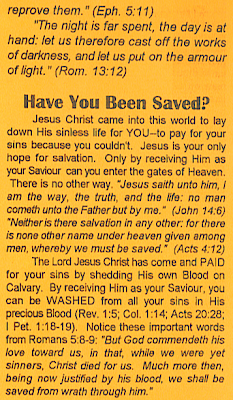