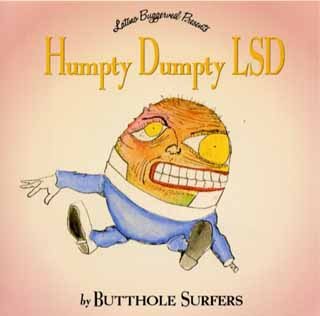 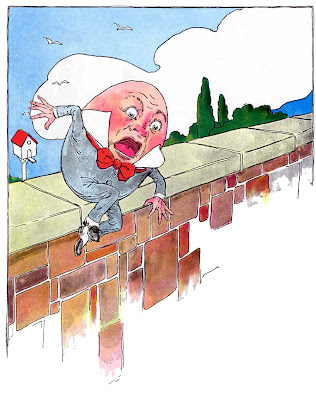 The news that Humpty Dumpty is in trouble yet again, this time because of the BBC, has once again stirred the righteous so that they might froth and foam.
But funnily enough, this time it's about the evils of censorship, and you can read all about the panic here in Duska Sulicich's No rhyme or reason in Humpty rewrite.
Apparently the Beeb has provoked another tale of political correctness gone mad:
This tale of BBC political correctness gone barmy that swept the world this week was so delightfully ludicrous, it had the stench of an internet hoax. But, no, it was all true. A singalong of Humpty Dumpty on CBeebies, the BBC's children's channel, ended not with all the King's cohorts unable to put the poor chap together again but, rather, conjuring some magic to make ''Humpty happy again''. Oh dear.
But hang on a tic. The real fraud here is the notion that Humpty Dumpty is an egg. Now as I understand it, the original text goes something like this:
Humpty Dumpty sat on a wall,
Humpty Dumpty had a great fall.
All the king's horses,
And all the king's men,
Couldn't put Humpty together again.
Where does it say that Humpty's an egg? Indeedy there's a good argument that Humpty Dumpty was eighteenth century slang for a short and clumsy person, and the pay off that he's an egg (the rhyme was originally posed as a riddle) only made sense if you thought the fellow in the riddle was a spatially challenged, vertigo afflicted dwarf. So there's your politically correct choice - either an egg or dwarf.
The dummies would vote for the humpty dumpty dwarf, the smart alecs would come up with an egg as the answer. Tell that to a Humpty who falls off a high point in the great wall of China!
Poor old Beeb:
The good burghers of the Beeb may have been a little taken aback by the blogosphere fallout from the Humpty re-interpretation. On Monday it went into damage control. BBC Northern Ireland radio broadcaster Wendy Austin had Adrian Mills, the executive producer at CBeebies, on air. His explanation went beyond the ''creative purposes'' first dished up to rationalise the rhyme's reimagining.

Mills insisted Humpty's changes had nothing to do with political correctness. Something Special was a program for children with learning difficulties and the producers were teaching children sign language as they read the nursery rhyme.

Before they started the Humpty Dumpty story, Humpty Dumpty was sad, Mills said, so the producers had signed ''sad''. They also wanted to teach the children ''happy'', so they changed the line at the end of the rhyme to ''bring in the sign for happy''.
Well we can't have children happy, can we, and it seems nothing delights Sulicich so much as when they're being scared shitless by Dorctor Who:
Hiding behind the couch was the thing. It was safest. Cowering there but still peering over the top of those crumpled, green contours, transfixed, unable to resist the unfolding horror.
The Doctor was in mortal danger - again.
Never mind, I'm sure the Beeb will survive the charge of nursery rhyme revisionism, which bizarrely Sulicich finds reminiscent of the days of Mary Whitehouse beavering away:
There was such colour and depth even in those old monochrome episodes of Dr Who all those years ago. So give me glorious villains, a dodgy set and a damn good scare any day - and keep the ghost of Mary Whitehouse out of the BBC, for rhyme and reason.
Well if the Beeb's in trouble, then I want that witch strumpet Tori Amos beheaded for her riff on the dwarf:
Humpty Dumpty sat on the wall
Humpty Dumpty had a great, great fall
All the king's horses and all the king's men
Couldn't put Humpty together again Humpty Dumpty and Betty Louise
Stole a sony and some camembert cheese
She said "Humpty baby, take me
Oooh, yeah, take me to the river
Cause I like the way it runs, yeah,
Take me to the river
You know I like the way it runs, yeah" He said, "Ah, ohh, everything's going my way"
He said, "Maybe it's my la-lucky day"
And he said, "Anything you want I can give"
She said, "I wanna take your picture
Mm, just for me"
He said, "Anything"
She said, "Up there, baby
Get on the wall, babe" Humpty Dumpty sat on the wall
And looked at her as he was falling and
All the king's horses and all the king's men
Couldn't put Humpty together again' Hey, Betty Louise
Hey, Betty Louise
She said, "I like custard in the summer, honey"
Oh yeah, what it takes to be queen
Hey, what it takes to be queen
What it takes to be...oh.

Those bloody politically correct feminists at it again. But perhaps the happiest riff is the one perpetrated in the show The Grim Adventures of Billy and Mandy:
Humpty Dumpty sat on a wall
Humpty Dumpty had a great fall
The greatest fall of all
A really, really, really great fall
And he fell, and fell, and fell
All the king's horses, and all the king's men, and the starving villagers
Had eggs for breakfast, lunch and dinner again, and again, and again!

And of course the controversy gives me a chance to re-cycle one of my favorite characters in one of my favorite pieces of literature:
"I don't know what you mean by 'glory,'" Alice said.
Humpty Dumpty smiled contemptuously. "Of course you don't – till I tell you. I meant 'there's a nice knock-down argument for you!'"
"But 'glory' doesn't mean 'a nice knock-down argument,'" Alice objected.
"When I use a word," Humpty Dumpty said in a rather a scornful tone, "it means just what I choose it to mean – neither more nor less."
"The question is," said Alice, "whether you can make words mean different things."
"The question is," said Humpty Dumpty, "which is to be master – that's all."
Alice was too much puzzled to say anything, so after a minute Humpty Dumpty began again.
"They've a temper, some of them – particularly verbs, they're the proudest – adjectives you can do anything with, but not verbs – however, I can manage the whole lot! Impenetrability! That's what I say!
Well impenetrability is what I say too, and the idea that you can't fiddle with the text - in this day and age of mash ups and re-mixes - is surely one of the more arcane and bizarre politically correct notions, along with the endless over-payment of words like "political correctness gone barmy" and "revisionism".
It was, Mills said, just a storm in a teacup. And the only change made to a nursery rhyme.

And yet - according to the MP who blew the lid on the whole saga - a cooking show on the same network had Little Miss Muffet befriending the spider. Was nursery rhyme revisionism becoming a staple of BBC's kiddie channel?
Oh yes, outrageous, and so alarming that way back in 1940 they used the bloody spider to promote reading among children (here for the good oil on that consorting with spiders Muffet): 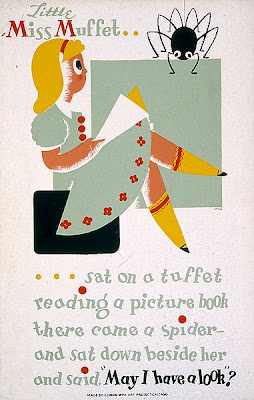 Well I'm as happy as larry about the right for anyone to watch Saw VI, and I used to love the old Doctor Who's, but you know whipping up a dire Mary Whitehouse conspiracy theory involving the saving of an egg in a traditional nursery rhyme sounds just a tad whacky, and almost ... it has to be said ... worthy of Mary Whitehouse.
Impenetrability, I repeat, and no I'm not referring to the difficulties of sex, or the problems a sperm faces penetrating the wall of an egg, I'm just holding out hope for a free form Humpty Dumpty and the ability to riff on his fall however you like. And if you want some further examples head off to this excellent wiki on the subject of Humpty Dumpty here.
And now a little recycling of In Bruges, and the problems of little people who get mistaken for eggs, which is of course central to the riddle's origins:
Ray: A lot of midgets tend to kill themselves. A disproportionate amount, actually. Hervé Villechaize off of Fantasy Island. I think somebody from the Time Bandits did. I suppose they must get really sad about like... being really little and that... people looking at them, laughing at them, calling them names. You know, "short arse". There's another famous midget. I miss him but I can't remember. It's not the R2D2 man; no, he's still going. I hope your midget doesn't kill himself. Your dream sequence will be fucked.
Chlo: He doesn't like being called a midget. He prefers dwarf.
Ray: This is exactly my point! People going around calling you a midget when you want to be called a dwarf. Of course you're going to blow your head off.
Excitabat enim fluctus in simpulo! (here)
(Below: the original, for conservative traditionalists who can't bear change or revisionism, especially of a lick spittle kind. Is it wrong for me to like the way she's paying out on the cretinous boy when she might grow up wanting to be an expert arachnologist?) 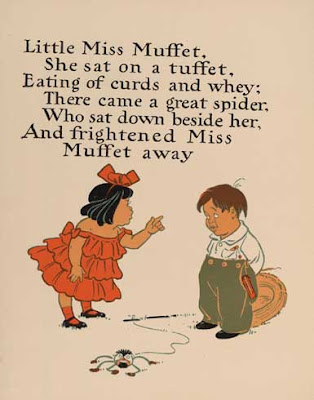