Will Steacy, Wallace Shawn, the joys of Harper's, and yes sex and nudity are interesting 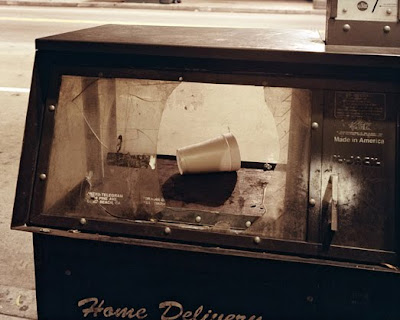 (Above: Will Steacy's photo Home Delivery).
Writing about commentariat columnists of the Australian kind can be tiring and tiresome. I mean there's only so much madness you can stand in the world in any given moment, especially when the world is, moment by moment, stark raving mad.
It must get hard for the commentariat too. Whatever happened to neo Michael Costa, who used to perch every Friday in The Australian and rail against the world? He's been missing in action for a few weeks now. Compared to the tireless, endless, all consuming ranting of Akerman, it's simply not good enough.
But clearly there's more to life than a satisfying rant, so that's why I break rank to note that this month's Harper's magazine features some neat photographs by Will Steacy, who does a very good line in evocations of the underbelly of the American dream.
The photo above reminded me of Raymond Chandler's famous remark that Los Angeles had the personality of a paper cup, though these days he'd have to use the less poetic notion of a styrofoam cup.
Anyway, while Harper's is subscription based (and worth it more than paying for Rupert Murdoch's notion of content), you can take a look at Will Steacy's work online, thanks to the full to overflowing intertubes, by going here. I like not only his subject matter, but his way with light, and his blog and the "photographs not taken" section are also worth a browse.
And while we're paying homage to this month's Harper's - which has a nifty feature by Rachel Aviv on domestic US missionaries bringing Jesus to children, a story by Alice Munro and a feature by Ben Austen on the post-Detroit wreck of the American dream - here's a couple of quotes from Wallace Shawn writing about sex in a collection Essays, to be published this fall. In the process of explaining why he likes to write about sex a lot - under the header Is Sex Interesting? - Shawn produces a comical notion of alienation:
It can only be seen as funny that men buy magazines containing pictures of breasts but not magazines with pictures of knees or forearms. It can only be seen as funny that demagogues give speeches denouncing men who insert their penises into other men's anuses - and then go home to insert their own penises into their wives' vaginas! (One might have thought it obvious that either both of these acts are completely outrageous or neither of them is.) And yet the interplay and permutations of the apparently meaningless, the desire to penetrate anus or vagina, the glimpse of the naked breast, the hope of sexual intercourse or the failure of it, lead to joy, grief, happiness, or desperation for the human creature.
Shawn notes that in a recent survey 93% of respondents listed faithfulness above the 70% who suggested "happy sexual relationships", suggesting that a clear 23% thought it more important they and their partners not have sex with others in preference to the notion of having enjoyable sex:
Sex has always been known to be such a powerful force that fragile humanity can't help but be terribly nervous in front of it, so powerful barriers have been devised to control it - taboos of all varieties, first of all, and then all the emotions subsumed under the concepts of jealousy and  possessiveness, possessiveness being a sort of anticipatory form of jealousy.
Now I'm beginning to understand why David Penberthy gets so agitated about nudity on Maslin beach. And why the Daily Terror publishes endless photographs of skimpily clad women but can't dare to take the logical step and turn itself into a Ralph:
My local newspaper, the New York Times, for example, does not include images of naked people. Many of its readers might enjoy it much more if it did, but those same readers still might not buy it if such images were in it, because it could no longer present the portrait of a normal, stable, adequate world - a world not ideal but still good enough - which it is the function of the Times to present every day. Nudity somehow implies that anything could happen, but the Times is committed to telling its readers that many things will not happen, because the world is under control, benevolent people are looking out for us, the situation is not as bad as we tend to think, and although problems do exist, they can be solved by wise rulers. The contemplation of nudity or sex could tend to bring up the alarming idea that at any moment human passion might rise up and topple the world we know.
Nailed it. Now it's clear. David Penberthy and Stephen Conroy. Two anti-nudist peas from the very same pod.
Meantime, if you're interested you can find the online (limited without subscription) Harper's here.
(Below: a more conventional image by Will Steacy, though I included it because it resonates with Shawn on sex. Steacy started out as a union laborer and he gets some grit and dirt in the fingernails of his photos, and I hope he's on view next time I'm in New York). 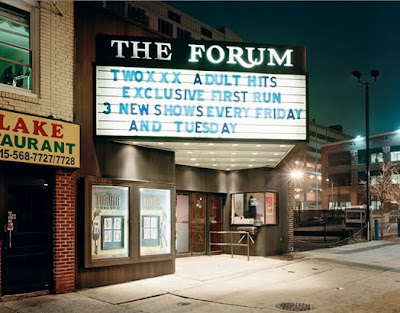