Tony Abbott, Malcolm Turnbull, crony capitalism and don't do as I do, do as I say 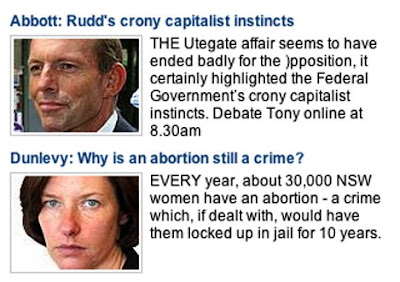 In one of those poignant juxtapositions you can only find in a Murdoch rag, there's Sue Dunlevy asking a perfectly reasonable question, which really should be addressed to the man in the box above her.
And when you read the intro to Abbott's blog, you get a further disconnect - here's a man still trying to make mileage out of the disaster that was Utegate by babbling on about crony capitalism, when the only evidence of misbehavior involved the public servant in question seeking to help a Liberal mate with suicidal tendencies.
Click through and it's only by para three that you get the full absurdity of Abbott's rant on Rudd's crony capitalist instincts.
Of course, this insiders’ club is the home base of the Rudd government in Canberra. Although the utegate affair seems to have ended badly for the opposition, it certainly highlighted the federal government’s crony capitalist instincts. What mattered most to ministers and their offices was these car dealers’ connections. No one seems to have gained any direct attention without being a friend of a politician, a party donor or an attendee at a party fundraiser. This culture of special deals for special mates is a problem for Kevin Rudd as well as for Anna Bligh because the national Labor leader can’t wash his hands of Labor’s problems in his own political nursery.
The trouble is of course that the far north in Australia - oh okay let's just call Queensland a flock of toads - is a peculiar land with peculiar institutions, as worthy of study as the deep south in the United States. They do things differently there, and seeking to tar Queenslander Kevin Rudd with Anna Bligh and the special mates rates way of doing things that has prevailed there for generations just won't fly at the moment.
Why? Because Malcolm Turnbull got a special mates rates deal on questions to be asked from a mate who happened to be a public servant who shouldn't have been offering his mates anything, let alone a false email and advanced coaching on questions to be asked.
So when Abbott utters the immortal line "the utegate affair seems to have ended badly for the opposition", that's all the punters here at the moment, and trying to hook it up to crony capitalist instincts is just inaudible, indecipherable blather.
Which is perhaps why this week the Liberals have floated Andrew Robb, perhaps the dullest Liberal of all, as a leadership contender, as a way of containing the damage, keeping heads down and backsides out of the firing line.
Certainly Abbott doesn't cut the mustard. Each  time he sticks his head above the parapets - valiantly fronting the ABC when asked - he sounds more and more like a boy with a finger in the dyke.
Theoretically the points Abbott attempts to make about Labor state governments should stick. Both Queensland and New South Wales have suffered from long entrenched Labor governments, where charging for access to ministers can bizarrely be seen as a legitimate form of fund raising.
Bligh, having just got back in, can perhaps do something about the culture in Queensland, but in New South Wales, the only way forward is to retire the Labor team to the benches for awhile and let the Liberals take care of their mates with their own brand of brown paper bag.
But here's the core problem:
The core problem is the vast amount of money that parties need to raise for the campaigns necessary to win elections. Politicians needing money are politicians whom the public feels can be bought. Malcolm Turnbull has proposed to ban large political donations. What’s Kevin Rudd’s solution?
Did you catch the core problem? Yep, it's there in the line "What's Kevin Rudd's solution?"
Well actually Tony, as a man who's just published a book outlining any number of fundamental Liberal policies, strategies and beliefs, and as a man who has leadership ambitions, what's your solution?
Because if you follow Malcolm Turnbull's logic and ban large political donations, all you might end up with is lots of small donations, aggregated in a way that avoids the ban.
And what are we to make of Greg Hunt, environment spokesman, getting agitated about the way Queensland premier Bligh's calling for a ban on political donations might just be a way of denying conservatives access to corporate donations while allowing Labor to access squillions from trade unions?
Which saw George Brandis step up to the plate to say that Turnbull and the opposition really did support a donations ban.
Because you see deep down, unless you happen to be rich, like Chairman Rudd or Malcolm Turnbull, politics needs some kind of funding, and it doesn't at the moment come from the moribund conventional political party structures, which have all the appeal and membership of a Zen Buddhist sect determined to live off grasshoppers.
So while it's easy to blather on about banning large donations, how will it work in practice, and how will elections be funded? Through the public purse? You mean socialist elections? Are Liberals still banking the profits and socializing the losses?
Because of course it didn't take long for the papers to sniff out details of Malcolm Turnbull's own fund raising. You can read it all here, in a nifty bit of research by Richard Baker in Millionaires oiling Turnbull machine:
Nearly 20 individuals or families listed among Australia's richest 200 have contributed to Malcolm Turnbull's electorate fund-raising machine, which has collected more than $1.4 million since 2007.
Contributors to the Opposition Leader's fund-raising arm, the Wentworth Forum, include the Seven Network chairman, Kerry Stokes; the Westfield founder, Frank Lowy; the former Macquarie Bank boss, Alan Moss; and the Aussie Home Loans chief, John Symond.

Others include the former chief of the failed investment bank Babcock & Brown, Phil Green; the boss of Meriton, Harry Triguboff; the property developer Bob Rose and Ros Packer.

It was set up in 2007 when Mr Turnbull was environment minister in the Howard government. At that time, electoral boundary changes had made Wentworth a less safe seat for the Liberals.

Regarded as the country's most sophisticated political fund-raising machine, the forum offers membership packages that give the most generous supporters more opportunities to gain access to Mr Turnbull.

A governor can host boardroom events, and gets two tables at big functions featuring Mr Turnbull, and attendance at an exclusive dinner for supporters.

Members receive one seat at a big function and three tickets to boardroom events.

Disclosure of the forum's methods has prompted charges that Mr Turnbull has put himself up for sale.

Wow. Okay, now we now Malcolm Turnbull's practice, as opposed to putative policy. So what's your policy Tony, just how would you deal with the likes of a well oiled machine like that run by Malcolm Turnbull?
It's a serious question, because already Australia has a patrician class - from both sides of the fence - with a long standing nepotic tradition. Just as many showbiz families stay in showbiz, cops in policing, and so on, the tendency for politicians to become a "keep it in the family" professional ruling class has become more pronounced, whatever the bizarre exceptions like Pauline Hanson and Steve Fielding.
One thing's for sure: cheap point scoring and snickering doesn't constitute a policy, when both sides live in glass houses and both sides can discover very large stones to hurl at each other. "Don't do as I do, do as I say" doesn't constitute a policy setting.
Meantime, today Dennis Shanahan has explained at length - in The Australian's regular Malcolm Turnbull bashing section - just why he think Turnbull is on the nose both in the area of the humanity and humility tests. It's all there in Failing the faith test, with an inordinate amount of crocodile tears shed for leaking public servant Godwin Grech.
Something about the way cronies have now fallen out, and Grech has been dumped in the scrap metal yard like a rusting ute. Which is why Abbott ranting on about crony capitalism and the banning of large donations is like listening to a sounding brass or a tinkling cymbal.
The federal Liberal party is in a sorry mess, and you could almost feel sorry for them, if they hadn't been the ones that so comprehensively shat in their own nest, and any other nest they could find. Still, in loon pond, even the recalcitrant cuckoo is welcome ...
Posted by dorothy parker at 8/07/2009 08:13:00 AM