Tim Rutten, Chairman Rupert, and another name for price fixing and collusion is price gouging, dressed up as a half baked 1st Amendment spiel 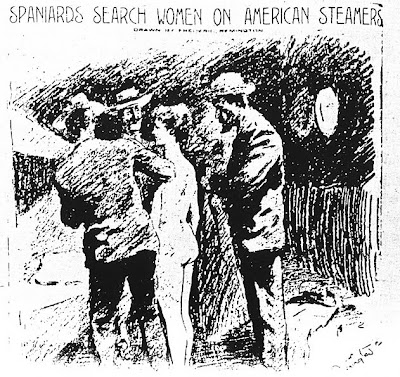 (Above: perhaps what the world needs is the kind of quality yellow journalism shown by William Randolph Hearst's papers, as in this fearless expose of male Spanish officials strip searching an American woman tourist in Cuba, allegedly for messages from rebels. Oh wait, don't worry I just read Rupert Murdoch's New York Post, followed by an uplifting encounter with the UK's The Sun).
It's not that often we wander away from our domestic pond, but this offering by Tim Rutten in the LA Times under the header Setting the price of a free press, caught our eye.
You will recall that recently there was a push for a government subsidy or even a government take over of "quality investigative journalism", never mind that government would probably be the most likely first starting point for any half way decent investigative journalist. Pravda on the movie.
Now Rutten tackles the notion of subsidy from a different direction:
If the 1st Amendment is to mean anything, Congress has to suspend antitrust rules for the newspaper industry so publishers can determine as a group how much to charge for online content.

Oh ain't the private sector and the free market a grand thing, along with the right to freedom of speech.
What next? Here's my modest proposal:
If economic recovery is to mean anything, Congress has to suspend antitrust rules for the banking industry so banks can determine as a group how much they'd like to take as profit each year, including bonuses for hard working executives.
You could probably write fine sounding sanctimonious sentences justifying any number of bold government initiatives. How about:
If stopping piracy and ending pornography is to mean anything, Congress has to suspend the 1st Amendment for the online industry, so the ISPs can determine as a group how to cut off the flow of online piracy and pornography.
Well life is hard and tough in the newspaper game at the moment - there's Chairman Rupert putting down like a dog his free London newspaper (here) while Fairfax has reported a massive drop in profits (here). Even Chairman Rupert's pay packet has dropped from $30.1 million to $18 million (here).
But you know, stuff happens, and it goes on happening. As it so happens, I'm told our family lost its fortune when young Irish chimney sweeps found that business was drying up as people stopped listening to Bing Crosby on the radio while gathered around the lounge room fireplace at Christmas Eve. Damn the rising cost of wood burning!
So Rutten's clarion call to save the newspaper game embodies more than a few profound ironies, not least those involving Chairman Rupert, which he at least has the grace to acknowledge:
Putting aside the irony of the man who probably has done more to undermine serious English-language news coverage than anybody else in our lifetimes now proposing to save it, Murdoch is right, and newspaper proprietors should elect his proposal or one of the others also being discussed -- and soon. American papers had combined revenues of $34.7 billion from the advertising in their print editions last year and just $3.1 billion in advertising from their online sites, despite the fact that, on average, 67.3 million people visited them each month.

Unless that imbalance is reduced, all but a few quality papers will disappear. For its part, Congress needs to move quickly to grant the newspaper industry at least a temporary exemption from antitrust and price-fixing laws so that publishers and proprietors can, in essence, collude for survival.
Collusion, price fixing, exemptions? Que? Sorry that's just not in my vocabulary, and I suspect it won't be in the vocab of legislators wondering how they can sell to the punters the bailing out of Chairman Rupert and others at the expense of mugs, who could then be made to fork over cash at a price determined as being good for them, because it's good for the industry. A bit like paying for the pleasure of a dose of castor oil.
Unfortunately the only previous example of government castor oil Rutten can think of involved the help provided in relation to free transmission of newspapers between printers, and either free postage or heavily subsidized postal rates for the mailing of certain kinds of papers.
Slim pickings as an example of why newspapers, most of them brave supporters of capitalism and the free market, should suddenly get a free kick in front of goal, as opposed to just getting out and selling their product to their readers.
So naturally Rutten thinks nothing of invoking what might be called the nobility cause. Newspapers aren't doing it for themselves, they're doing it for their readers.
More important, if Congress acts as it should, it will do so not on behalf of newspapers but for their readers. The press, after all, does not assert 1st Amendment protections on its own behalf but as the custodian of such protections on behalf of the American people. We ought not lose sight of the fact that the 1st Amendment links the rights to religion, free speech, a free press and peaceable assembly for the redress of grievance for a reason. The framers wisely judged that a healthy democratic government required people informed by a free press, acting according to the dictates of their own consciences, speaking their minds without inhibition in the free associations of their choosing.

Oh the care and the love and the concern and the feeling for the reader as the newspaper barons conspire to pick their wallets or pockets all in a good cause - protecting the freedom of speech of newspaper proprietors, their shareholders, and paid journalists.
Newsflash. Has anyone thought about changing their business model to make newspapers work in the new frontier of digital content?
Well a few have, but most were content to lumber about like dinosaurs, not caring too much about how or when the meteor might hit. For this we should suspend free markets and pay a premium?
There is a kind of spiritual symbiosis in the complementary exercise of these most fundamental rights. If the unlooked-for consequences of technical innovation somehow threatened religious freedom -- which is to say, liberty of conscience -- or inhibited free speech or intimidated people from assembling, there's no doubt Congress would act expeditiously. So it now should on behalf of a free press.

Well there's just one problem with this. Unless - or until - we start hard wiring people so that rampant militant secularists and atheists can send their hideous propaganda directly to the 'god spot' in the human brain, Rutten is going to have a hard time coming up with examples to show how technical innovations might threaten religious freedom or liberty of conscience. As opposed to newspaper dinosaurs that didn't get their act together, and now want an exemption from the cruel 'efficient' world of the market most of us face on a daily basis.
About the biggest example of the sudden flowering of free speech - electronic assembling in virtual worlds - is the thing that's allowed the wired parts of the world to break free of the shackles of Chairman Rupert and others, and now the intertubes are regularly dressed up as a dire threat to a free press and the interests of readers and consumers, as if such people didn't know what was good for them. Like free (with commercials) is suddenly bad? Tell that to network television and commercial radio.
Newspaper proprietors with as serious an interest in their readers' interest as their own bottom lines ought to follow Murdoch's unlikely lead into a consortium of pay-to-view news websites or adopt one of the other proposed models as quickly as practical. Congress should enact the legislation required to allow them to act and price collectively, which has to be done if any of these schemes are to work.
In his brave new world, does Rutten seriously expect anyone to believe that Murdoch has his readers' interests at heart as much as his bottom line? Has Murdoch ever shown it in the past, and why should he change his spots now?
But I guess as a special pleader, it's important to sob, and hit your breast hard, and threaten to disappear, thereby ending western civilization as we know it in a month or two. Perhaps the whole free world as we know it might disappear.
But worse still Rutten's not even offering a trade - like spiking rags such as the UK The Sun and the New York Post. Don't tell me these are quality rags, yet they'll also presumably get the benefit of his clarion call for price fixing. Unless of course he's proposing the tabloid rags pass to one side of the gate, without collusion and the benefit of a helping hand, while the quality rags pass on the other side of the gate, and blessed with manna from heaven from a loving public, go on to a righteous future of investigative journalism.

Unless our lawmakers empower the newspaper industry to act on its readers' behalf, it's only a matter of time until there are too few serious sources of quality -- or "premium" -- journalism to guarantee the reality of the free press on which all the 1st Amendment's indispensable liberties depend.

What a load of cobblers. Remind me again how the American press were the first to cheer George Bush on his way to war in Iraq, and belatedly some then decided to apologize for their blind and wretched coverage? Hello New York Times?
If newspapers can't earn their keep, and attract a paying public through free market rules designed to prevent collusion, price fixing and gouging, then let them die.
After all, we know who came after the dinosaurs, and perhaps somewhere right now there's a bright and clever spark with a new way to be nimble and to form a global community of news and information ...
Just don't let Rupert Murdoch get hold of it, or he'll turn it into another MySpace.
(Below: the evil spirits of the modern daily press spilling out of a printing press, a November 21 1888 Puck magazine cartoon. Everything changes so it can stay the same). 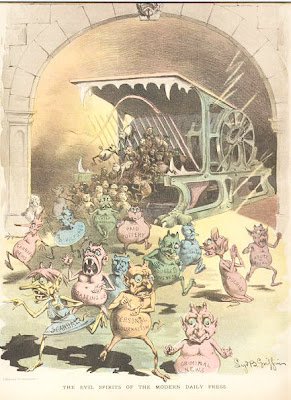