Tim Blair, the poley bear, the dodo, and bloody wankers 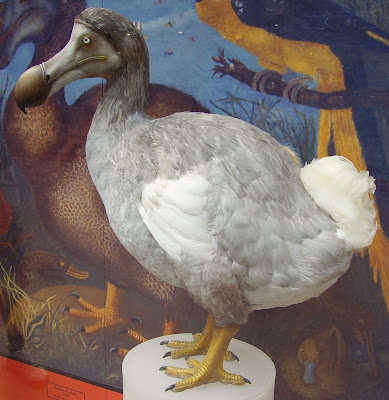 Why do I sometimes think about the dodo, apart from its tremendous usefulness in the phrase "dead as a dodo" and "dumb as a dodo", and its straightforward handiness as an epithet, as in "jeez, he's such a fucking dodo."
The dodo, I suppose, teaches us much about the extinction of a species.
Now you might think that their passing was all the fault of humans. And it's true that the dodo was, being a dodo, fearless around people, and with flightlessness thrown in, easy prey. But the dodo was tough eating, and it was all the other creatures that humans brought to Mauritius - dogs, pigs, cats and rats and crab-eating macaques - which did a lot of the damage, by hunting and eating eggs in the nest.
Sure humans destroyed the forests in which the dodos lived, and indulged in some mass killings to provision ships, but bring me that bowl of water so I can ritually wash my hands of any guilt or blame concerning human kind's involvement in the murderous affair (you can wiki the details here).
You believe me? Good, you're about ready to go join Tim Blair on his blog.
The entirely human response to the plight of the dodo? To make those ugly birds the butt of jokes. No one cared about the dodo, and no one much does today. Extinction is just so hilarious, a bit like the laughs you can get by delivering a chinese burn or a wedgie to the weakest kid in the class.
So the plight of the polar bear in current times is hugely funny to the clowns in the class. The story went around a few days ago that polar bears were doing it tough, in any number of ways, with the reduction in sea ice possibly even affecting the average size of polar bear skulls - you can read an ABC transcript of the story they did last Wednesday on The World Today, or listen, by going here.
Tim Blair's response under the header Bears improved?
To joke about the poley bear shrinking and squinching down from a human-chomping, truck-molesting brute to ever so cute baby poley bear, to the cutest of all poley bears: 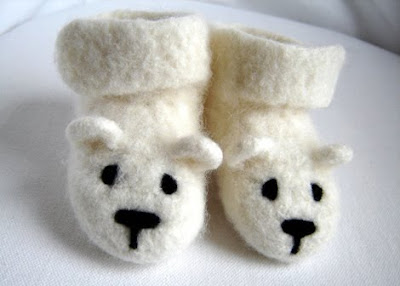 Laugh? Sure did. Cackled, howled, slapped my thighs, dropped a big load in the saloon spittoon. Split my guts like a woodchopper slicing open a wolf.
Oh and everybody chortled and had such fun thanks to the class clown. Here's one wag:
I’ve been looking anorexic
And I guess I’m eating less,
And my coat has lost its lustre,
Which I think is due to stress.

But I’ve got to laugh at people
So concerned about my fate
While they’re buying semen takeout
From the lower forty-eight.
Oh jeez, my stitches. I'm coming apart. Stop it, we'll all go blind.
Happily no match for the wag who went on an extended ramble into childish gabble, with the punchline:

... daddy are you really Really sure I am a Weal WEAL poley bear? Weally Weally Truely?
Yes son you really really are a real poley bear. Why do you ask?
Little bear says. I just wanna know why I’m Fweezing wucking COLD is all. sniff.

Laugh? Cacked myself. Why I've had to leave my panties in the pre-wash for a week I laughed so hard.
Then we got serious:
Methinks that the only thing that is shrinking is the size of these scientists(?) brains. You know it’s amazing, scientists are mentioned but it is never revealed who these “scientists’ are or who the report came from or who commissioned the report. Every week we are inundated with some Looney Report from some Looney Tune Scientist(s) revealing some farcical report from some unknown source stating some idiotic statement, such as this one, with no substantiated facts as to how this outcome was achieved. And yet the other side of the argument is never or very rarely reported....WTF.
Repeat a lie often enough and it will soon become the truth........BLOODY WANKERS!

Well actually you don't have to look too far. Below is a photo of Cino Pertoldi, and here are his contact details in Denmark, together with a link to a list of his publications. He has a masters degree in natural science from the University of Milan, and a PhD from the department of ecology and genetics, University of Aarhus. Oops, two strikes, must be dumb. Couldn't read The Punch for starters. His research focuses on empirical conservation and the evolutionary genetics of animals.
Why if you wanted to you could even head off here, though you might have to get serious and stump up some moola for access, so you can consult the actual study as printed in the Journal of Zoology - unless of course you read the abstract and your poley bear brain begins to hurt:
A morphometric study was conducted on six skull traits and seven teeth traits of 282 polar bear Ursus maritimus skulls sampled in East Greenland from 1892 to 2002, the polar bear material originated from two distinct periods: one period covering 1892–1939 and the other from 1961–2002. The first period being before the introduction of organochlorines in the Arctic environment and having more extensive sea ice cover when compared with the later period. Admixture analysis, followed by multivariate analyses provided evidence for morphometric differences in both the size and the shape of individual skulls collected in the two periods.
There's loads more, nano seconds away on the full to overflowing intertubes.
Why then you could even write a learned rebuttal disputing the methodology deployed and getting it ready for publication in the Journal of Zoology, as a way of showing Pertoldi et al what fools they were as scientists. And charge people to access your own tremendously scientific and insightful paper.
Though be warned, you might have to pass a few tedious tests, like having to convince people you have the foggiest clue about what the fuck you're talking about. Trying to convince a few referees along the way that you aren't in the grip of loonacy might not be that easy, not when you manage to imitate the shape and sound of a prize gherkin so naturally.
Yep, it's so much more easy to spend a nano second writing a flip note in a blog like a cretin with a post graduate degree in ultimate stupidity.
What's the words I'm thinking of? Bloody wankers?
No, fucking dodos.
(Below: Cino Pertoldi, the cause of all the fuss about poley bear brains. Sheesh, academics, can't live with 'em, can't live without 'em).