Ted Nugent, the Waco Tribune, Carlos Sanchez and remember the Alamo but forget about Vietnam 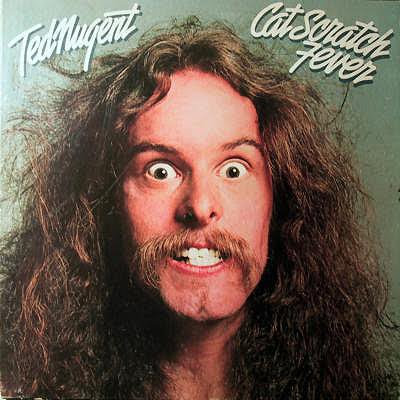 Disaster!
Just as the Alamo once fell silent, after unutterably brave defiance, so it seems Ted Nugent has been made to fall silent by the savage editor of the Waco Tribune. Well at least on the pages of the Tribune because the blabbermouth will never fall silent until they prise the keyboard and guitar from his cold dead hands.
New owners, the Robinson family, and a new editorial attitude, which involved more conservative editorials, but of a thoughtful and civil kind, brought to an end the rocker's verbose right wing pomposity, compounded by a bizarre exchange between editor Carloz Sanchez and his rocker columnist.
You can read it all here under the header Carlos Sanchez: Bidding farewell and good luck to Ted Nugent.
According to Sanchez, he'd sent an email to Nugent asking that his columns be thoughtful, without personal attacks, treated officials with a modicum of respect, and offered up Nugent's viewpoint without attacking others.
Steep. But Sanchez claims Nugent responded within a couple of hours, saying he'd give it a whack and meantime - since Nugent was in Africa - he should use some columns to hand.
Unfortunately the previous opinion editor had departed, so they couldn't find the columns, and next thing Sanchez discovers is that Ted's let loose a friendly volly in his direction, via his website:
“So I get this spineless, soulless anti-American Email from Carlos Sanchez, new editor of Waco Tribune, listing new rules for my weekly Sunday feature telling me I cant (sic) criticize anyone, only recommend things, can’t have any negativity, only cute nicyness.”
He beseeches his fans to “HIT EM & HIT EM HARD!!”
Uh oh, and to make it worse, Sanchez claims he's a strong supporter of Nugent:
Two years ago, I sustained a strong attack from the left that demanded that I pull his column after a concert he had in which he held up what appeared to be some semi-automatic weapons on stage and unleashed on candidate Barack Obama, “You might want to suck on these, you punk.”
Then he turned his wrath to candidate Hillary Clinton and said, “Hey Hillary, you might want to ride one of these into the sunset, you worthless b——.”

I wrote a column criticizing his antics on stage but steadfastly refusing to pull his column from the Trib because I believe strongly that a diversity of voices is important.
Well now it seems there's no reason now to return to the Waco Tribune, not since the day they drove old Ted Nugent down. Apparently the Robinsons want people to stop shouting at each other and calling each other names, and expressing opinions in a respectful manner.
WTF? Ted's the Texas wildman, generating bad music with four chords (on a good day) and over the top one chord opinions. Here's Ted in peaceful mode:
Liberal buffoons believe in John Lennon’s lyrics: “All we are saying, is give peace a chance.” I believe what Karl vonClausewitz wrote: “To secure peace is to prepare for war.”

Peace and love will get you killed. True peace is achieved through the application and unrelenting use of superior firepower.

History tells us the Roman Empire did not attempt to negotiate peace with its enemies. Instead, it went about the task of killing the enemy. Romans rocked.

America’s strongest arrow in our international quiver is to always, always stand for freedom and liberty.
And if you don't agree, expect to be dead. There, that's freedom for you, freedom to inhabit a grave during Ted's one thousand year rule of the world. You can catch more of Ted's opinions at the Waco Tribune while they're still up by going here, but who knows how long they'll last.
Of course when it came to Vietnam, Ted wasn't so free and easy.
An interviewer from the British newspaper The Independent questioned Nugent about a 1977 interview in High Times magazine in which Nugent allegedly detailed elaborate steps taken to avoid the Vietnam draft.
"I got 30 days' notice of the physical," Nugent told them. "I ceased cleansing my body. Two weeks before the test I stopped eating food with nutritional value. A week before, I stopped going to the bathroom. I did it in my pants. My pants got crusted up."
Nugent dismissed the veracity of these statements, saying "You've got to realize that these interviewers would arrive with glazed eyes and I would make stories up." He explained that he did not go to Vietnam because he had a one-year student deferment. When questioned, he admitted that he had "not wanted to get his ass blown off in Vietnam," but made note of a tour he made with the USO in 2004 to Fallujah and Afghanistan as support of his assertion that "I am not a coward." He also said that "Because I failed to serve in Vietnam, I feel an obligation now, to do everything I can to support those defending our freedom. Do I feel guilt and embarrassment? Yes." (Wikipedia here).
Talk like a wild turkey, walk like a wild turkey. But hey, it puts him in with good company, like George W. Bush and Dick Cheney.
Well there was fierce discussion amongst the folks in Waco about the downfall of Ted. Some mourned the loss:
The Robinsons are putting a muzzle on Ted and denying him his rights.
We the people do not have to agree with Ted, just allow him the right that we believe the Constitution grants all of us: free speech.

But on the other side there were some vicious vengeful liberals, full of hate:
... I cannot tell you how overjoyed I was to read that Ted Nugent’s column has been canceled.

... I have very little respect for someone’s uneducated rantings and ravings and his disrespectful, rabid comments. I found it amazing that the Trib put up with this as long as it did.

So I’ve decided to hold off a little longer before canceling my subscription. If the Robinsons are willing to take someone like Nugent’s gross opinions out of earshot, then maybe there will be a chance the conservative voice of our newspaper will be a little less offensive. (here)
Et tu Debbie Ucci of Waco Texas?
But never fear, you can get more Ted Nugent than you ever dreamed of by going off to his site here. And of course he's on MySpace spruiking his new album, and if you still can't get enough of Ted, then the Texas Monthly has the capper to the story, as presented by Evan Smith under the header The Nuge vs. The Waco Trib:
America and Texas was born with a defiant streak. Those genes still flow through my veins. To request that I not criticize is to spit on the memory of those who gave birth to America. Again, I criticize where I believe criticism is due. That’s my civic job and your job as Americans. If the editor of this newspaper doesn’t like that, he will have to fire me. I will not surrender to his wrong demands.
In the words of another famous American military man, William Barrett Travis, commander of the Alamo: God & Texas. Victory or death.
Oh take a valium, you drama queen. It's only a newspaper column by a ranter and a raver. Now sing us a song, you know the one that charted at 30 in the US hot 100 in 1977, the highest you ever got in the charts:
I make the pussy purr with
The stroke of my hand
They know they gettin' it from me
They know just where to go
When they need their lovin man
They know I do it for free

They give me cat scratch fever
Cat scratch fever
Um, you know what Ted, I think in the end it's a pass for me, but it sure helps explain why your columns are a walking talking assembly of cliches of a right wing kind.
I'll go with John Lennon, who at least could write a good tune, while you keep on thinking you're George Washington or General Patton, when you're just a bloody rock 'n roller with a big mouth.
Whew, that felt good. I think I'm crossing over, I'm learning to talk just like Ted. Some day soon I might make it all the way over to the dark side ...
Hey you, yes you, you right wing sexist pig wild man flunkey, I'm talking to you. Here's my respectful low key response to your respectful arguments.
Nah, nah, nah,
Hey, hey, hey,
Goodbye! 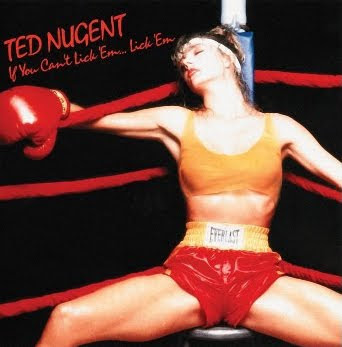