So it turns out that the loon who turned up outside a presidential event packing an assault rifle is in fact a member of Pastor Steven Anderson's fundie Christian flock (here's the pastor's first visit to loon pond).
From Crooks and Liars:
"Chris" was on Alex Jones' "Prison Planet" radio show late last week and discussed how "my pastor was beaten up" at a Border Patrol checkpoint ...

Jones: Now I'm starting to get a clearer picture. You go to Pastor Anderson's church, I see. 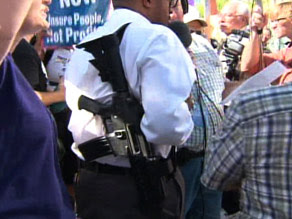 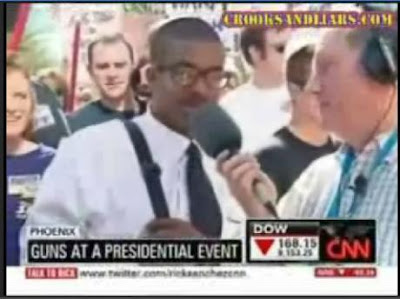 Yet back in April, the same Pastor Steven Anderson had the cheek to chivvy a cop for carrying a machine gun in public - see the video above. So a cop carrying a machine gun in the course of his duties is bad, but a loon carrying an assault rifle to a presidential event is good?
I guess when it comes to modern icecream, there's always solid old plain vanilla, and then there's rich fruity blends, and then there's fruity icecream with a huge sprinkling of nuts. Gets so you can't pick the icecream from the fruit and nuts embedded therein.
Apparently Anderson has a habit of baiting cops, and was arrested in April by the Border Patrol for being uncooperative at a check point. You can see that story here, and you can check out the video he made and posted on YouTube that went viral by going here.
You can also catch up on Pastor Anderson's other videos at the same location, which either feature stories of cop harassment, fourth amendment rights, or fundie Christian stuff. My personal favorite was a "Basic Soul-winning Demonstration Video (witnessing, gospel)".
Second thoughts, why bother. Pastor Anderson has earned the right to stay in the extreme right wing corner of loon pond, well away from the central area, so his attention seeking squawking and carrying on can't be heard by people who need to get on about their daily business.
Lordy, who'd want to be a cop in America, where the job doesn't just involve catching baddies, but dealing with people who've got a loose wire or three.
You know I've always wondered the how and the why of the world. If a car's got a wire loose, or is mis-firing on four cylinders, or there's a clunk in the diff, you can always pull it apart and try to fix the problem.
But what happens when people get hard wired the wrong way, or there's something wrong with the chip, or the hard drive's too full, or you've overclocked the CPU motherboard and memory, and everything's fine for a moment, and then the whole damn thing fuses out, and damn it, there's nothing you can do to recover functionality or the data.
Never mind. Perhaps one of these koans might console you:
A file that big?
It might be very useful.
But now it is gone.

Rather than a beep
Or a rude error message
These words: File Not Found

Having been erased
The document you’re seeking
Must now be re-typed.

The web site you seek
Cannot be located
But endless more exist.

With searching comes loss
And the presence of absence:
“My Novel” not found.

Three things are certain:
Death, taxes and lost data.
Guess which has occurred.

You step in the stream
But the water has moved on.
This page is not here.