Piers Akerman, the NBN, and a plea to keep Australia beautiful and efficient, never mind the cost 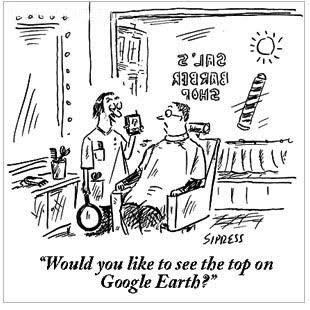 (Above: and just think with the poles and the wiring of the NBN how ugly we'll look on Google).
Sometimes it takes a little while for the commentariat to get on the bandwagon, but hey once the horses start to roll, we surely do get a wagon train.
You might recall that it was only in April that Akker Dakker was jumping up and down about the cost of the National Broadband Network: $47 billion to be flushed down a broadband pipe dream.
Back then the angle of attack was to quote Henry Ergas saying we'd all be ruined:
Ergas says Rudd has provided no breakdown of the $43 billion project, no estimate of the risk of costs blowing out or evidence the project is actually achievable, let alone an analysis of the potential barriers and risks involved. Taxpayers, he says, are being asked to sign a blank cheque.
Yep, it was a disaster, borrowing cash on a never never plan to seek the impossible dream.
Now Akker Dakker wants Chairman Rudd to blow a few more billion putting all the cabling underground - Powerful arguments for Rudd to go underground. Not, I want you to understand, because anything like global warming has been making the end of winter unseasonably warm or gales have started blowing. No, nothing's unusual:
News broadcasts yesterday headlined reports of power outages across Victoria which left thousands of homes without electricity.

On Monday and Tuesday, it was Sydney’s turn to succumb to winds generated from a strong cold front which cut power to nearly 10,000 homes as electricity lines came down.

The weather was by no means unusual, nor was the loss of power. It’s the price we pay for having power lines strung from poles across the metropolitan area. They will come down whenever the wind blows.

So it doesn’t make much sense for the Rudd Labor Government to string its much-vaunted hi-tech glass fibre national broadband networks (NBN) lines on the same rotting wooden poles.

Surely the whole 21st century concept of providing a “nation-building infrastructure needed for tomorrow”, to use Prime Minister Kevin Rudd’s own overblown description of the scheme, demands something more substantial than transmission towers built to meet the demands of the 19th century?

Yes, the news that parts of Australia have enjoyed their warmest winter ever is surely unexceptional news (here).
Moving on, it seems that at last Akker Dakker has caught up with Nick Minchin's July FUD column Look, up in the sky! There's an ugly downside to Labor's broadband project.
But really Akker's logic is so desperate it's hard to resist a quiet chortle. Because in the time we've been in our house, we've had Foxtel (hiss) and Optus (back when there was Optus) and broadband and phones and power all delivered through overhead wires, and we still have the quaint sight of two sets of cables competing to deliver pay, telephony and broadband services.
Ugly? Sure, and even uglier if a third cable gets installed to deliver the NBN, if neither Optus nor Telstra can be persuaded to play the game.
But it really is cheeky of Akker Dakker to call the NBN a delusionary dream, then demand it go underground on the basis of a strong wind or two. So that he and the Liberals can then maintain their rage about the rampant blowout to the already excessive cost. And the debt! Never forget the intergenerational debt!
And what about the imagery?
NSW has suffered enough from patch-work solutions to pressing problems (look at the Cahill Expressway) and the repeatedly-announced plans to fix the public transport system. It seems that the Federal Labor Government is now determined to impose a second-rate Third World solution to this latest challenge.

Anyone who has seen the webs of wires hanging from poles in Asian and South and Central American slums will be familiar with the answer the Rudd Government has in mind for its broadband rollout.

Cheap and nasty comes to mind but ugly, inefficient and ultimately more costly is closer to the mark.

Slums?
So where's the campaign to get all the power poles and their overhead wires underground?
Because while they litter the urban landscape I'm afraid it's going to remind us of the web of wires familiar from urban slums around the world. Well at least the urban slums that can actually afford an electrical connection to run their double door fridges and 50" plasma screens.
Well Akker Dakker is right there at the cutting edge. Put everything underground, hang the cost, everyone is in favor of it, and instead of crashing into power poles, motorists can instead crash into trees or front fences or other more helpful barriers:
In a number of submissions to the Federal Government’s Senate Select Committee, a variety of groups have pointed out the foolishness of the low-cost overhead roll-out.

Some refer to the findings of a $1.5 million study conducted for the Department of Communications, Information Technology and the Arts by Optus and Telstra in 1998 titled Putting Cables Underground which concluded (presciently) that undergrounding electricity lines would decrease transmission losses and reduce so-called greenhouse gas emissions.

Other timely conclusions included the reduction of bushfire risk, reduced electricity outages and a reduction in the number of electrocutions, reduced network maintenance costs, reduced numbers of vehicle collisions with poles, reduced costs of tree pruning and a beneficial impact on property values.

Placing all cables underground makes sense. Up to 10 per cent of all road deaths currently involve a roadside pole.
Won't someone think of the motorists? And what's this about cutting greenhouse gas emissions for the non-existent problem of global warming.
But hey, hang the expense, let's spend like there's tomorrow. Rack up the debt. What's a few more billion amongst chums?
And of course there's the bushfire threat:
If we are to believe the Government, there is a crying need to go into hock to pay for the NBN because it will essentially replace all other forms of communication.

To place such a network at risk by stringing it between poles rather than undergrounding negates the thinking behind building a modern web.

In every bushfire around Sydney in the past 30 years, wooden power and telephone poles have been burnt down, cutting communications in a crisis.

In some areas, those wooden poles have now been replaced with concrete replicas but the threat to the wires is the same.

In the 1994 bushfires there were power and communications failures to the south, west and north of the city. In the 2003 ACT fires suburbs of Canberra lost communication and power lines.

The severe storms that sweep NSW are just as likely to smash the communication and power distribution networks - as Blacktown residents learnt to their cost in February last year, when thousands were left without power or communications for weeks.
Yep, suddenly we've gone from dreaming the impossible, silly dream, to not spending enough money to get the vision thing right, saving motorists, keeping the vital lines of communication open and avoiding a South American slum look in an urban setting.
So what I want to know is how did Akker Dakker reach this change of heart, and come to the vision thing? Where instead of cheap and nasty, he now wants expensive and good looking in a Steve Jobs kinda way. Where instead of ugly and inefficient, he wants beautiful and efficient and a big increase in the initial cost outlay.
Is it just simple ignorance?
Commonsense should apply. Even an amateur DIY handyman would understand the difference between repairing a broken copper wire connection with a simple twist and the technical difficulties involved in joining a brittle glass fibre.
Commonsense would actually tell anyone that the real problem is that Telstra controls the bulk of underground networks, and that they have been the fly in the ointment as a result of the botched privatization by the Howard government.
Common sense would also tell you that the day power lines go underground all around Australia (as opposed to fancy new developments and in boutique council areas) is the day we've sold off Western Australia to the Chinese for a heap of moola.
In the meantime, what I'd like Minchin and other Liberals to confirm is that they're right behind the extra billions needed to stick the NBN underground, and that indeedy they're right behind the whole NBN vision thing, while hating Stephen Conroy's attempt to use it to introduce censorship to Australia at a network level that'll be as bad as the current Chinese government system.
And that they'll never make a fuss about the cost blow out their own desire to beautify Australia will necessarily involve. Cross their hearts and hope to die, as the underground option suddenly turns into a Nathan Rees type plan to run the metro to Rozelle.
Expect to hear that soon? You've got to be dreaming.
Oh and one more thing. Who's going to put up some token wires so the bullies who steal the shoes off nerdy kids will have somewhere to throw them as trophies? Won't anyone ever think of the children ...
(Below: a Mumbai slum. Notice the hideous abundance of power poles and ugly wiring). 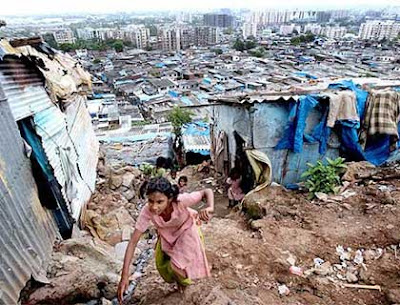