Paul Sheehan, three cheers for discrimination and remember the sarsaparilla 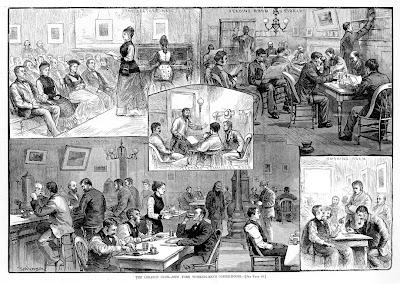 (Above: the Lebanon club, a New York working-mens coffee house in 1880. Spot the women. More images from the NYPL digital gallery here).
I only have dim memories of the grand old days of Australian male pub culture.
When you speak to young things, they look at you in a disbelieving way, as if you're talking about some long lost dark era of discrimination. But the land so effectively evoked in the Australian feature Wake in Fright isn't so far behind us that the living can't testify as to its truth.
In the old days, women and children often stayed in the car while the menfolk nipped inside for a quick shout or two. You could no more take a woman into a public bar than you could take one into a shearing shed.
By definition, any woman who went in to a public bar was a slut or a prostitute, or both, unless of course they were stationed behind the counter serving out the beer and listening to the men whine about life.
So discreet women with social ambitions either went into the lounge bar, or stayed in the car outside the pub, and had a lemon squash delivered to them as a consolation prize. That way you avoided the loose women you could also find in the lounge bar.
Funny when you think about the wording - a public bar where fifty per cent of the population weren't the public, or welcome, while they could lounge in the lounge bar if they liked.
I remember thinking it was vaguely peculiar, even a little off putting. Were women (and children) so alien, foreign and useless that they couldn't go where men might freely go, and assemble for their collective pleasure?
Well of course in those days, the pubs were tiled so that the mopping up of the vomit from the six o'clock swill or the ten o'clock swill could be more easily handled. And they talk about binge drinking today. They have no idea, these newly sensitive gits who think binge drinking was invented last week, or a year ago.
But what capped it for me was the day my father brought out a sarsaparilla drink as my reward for sitting in the car furnace as it gently began to bake. Not a ginger beer or a lemon squash, or any of the other soft drinks you might acquire, but a strange, exotic brew you can mainly find in root beer concoctions beloved of Americans and Australians.
So not only was I banned, but I had to take what I was given, even if it had a flavor closely related to fizzy castor oil.
Happily, everything must pass, and so it came about that women could go into public bars to have a drink without it being taken as a sign they wanted to fuck every man with a beer in his hand, and they could, if they wanted, indulge in binge drinking in a way that would make my metho drinking uncle cringe. Ah, the joys of equality.
But when I see the kind of crap dished out by Paul Sheehan in Three cheers for discrimination, I still feel the taste of sarsaparilla in my mouth.
You see, Sheehan is all for discrimination. That's what his header says. As clear as day.
Now sure he dresses it up with lofty rhetoric the benefits of elitist clubs and institutions for women, but the message remains the same. And the fact that women discriminate makes, by a magic, dexterous flip of the hand, all discrimination quite fine:
I've never been to the Lyceum Club, and it would never admit me as a member. Rightly so. The Lyceum Club has rigorous standards. I commend the club for its discrimination and its elitism, both admirable qualities. Besides, as Groucho Marx once said, ''I would not join any club that would have me as a member''.

On Thursday the Governor-General, Quentin Bryce, was made an honorary member of the 97-year-old club, which is for women only.

You know, I was up in Harlem a few weeks ago, and I actually had dinner with Al Sharpton, who is a very, very interesting guy. And he comes on The Factor a lot, and then I treated him to dinner, because he's made himself available to us, and I felt that I wanted to take him up there. And we went to Sylvia's, a very famous restaurant in Harlem. I had a great time, and all the people up there are tremendously respectful. They all watch The Factor. You know, when Sharpton and I walked in, it was like a big commotion and everything, but everybody was very nice.

And I couldn't get over the fact that there was no difference between Sylvia's restaurant and any other restaurant in New York City. I mean, it was exactly the same, even though it's run by blacks, primarily black patronship.
Why lordy, next thing you know, we'll discover blacks are really people. It might take a little longer for women to be afforded that status, but never mind.
Back to Paul Sheehan. After celebrating the glories of a toffy, poncy club of distinguished women, he suddenly discovers an attitude problem which brings out the best in his always curmudgeonly grumpiness:
The Governor-General was once the Australian Human Rights Commission's Sex Discrimination Commissioner. The present occupant of that position, Elizabeth Broderick, has used the occasion to offer her opinion that it is ''not smart'' for any such institution to lock out half of the population.

No, what is not smart is Broderick's sanctimonious, gratuitous intervention. It is emblematic of the commission's hunger for relevance.

Well actually what is not smart is Sheehan's sanctimonious, gratuitous intervention in the matter of discrimination on the basis that he thinks a club for 'women only' is as fine as a club for 'men only' is as fine for a club dedicated to whatever other group wants to exclude another group to make a social, cultural, economic or political point.
But actually Sheehan isn't interested in a discussion of discrimination, though if you go to the NT, you'll see active white and black places and pubs in operation around the clock, designated by social and cultural rules rather than the law.
What he's interested in bagging is the Calma report and the Human Rights Commission and the current president of the commission, Catherine Branson.
Well they can look after themselves, and respond as they will to Sheehan's talk of cultural cyanide.
Me I can still taste the sarsaparilla in one way or another on a daily basis, and Sheehan can rabbit on as much as he likes about the way exclusive clubs are good and just and right and proper, but he's just mounting an argument so beloved of the pigs in Animal Farm:
It was about this time that the pigs suddenly moved into the farmhouse and took up their residence there. Again the animals seemed to remember that a resolution against this had been passed in the early days, and again Squealer was able to convince them that this was not the case. It was absolutely necessary, he said, that the pigs, who were the brains of the farm, should have a quiet place to work in. It was also more suited to the dignity of the Leader (for of late he had taken to speaking of Napoleon under the title of "Leader") to live in a house than in a mere sty. Nevertheless, some of the animals were disturbed when they heard that the pigs not only took their meals in the kitchen and used the drawing-room as a recreation room, but also slept in the beds. Boxer passed it off as usual with "Napoleon is always right!", but Clover, who thought she remembered a definite ruling against beds, went to the end of the barn and tried to puzzle out the Seven Commandments which were inscribed there. Finding herself unable to read more than individual letters, she fetched Muriel.
"Muriel," she said, "read me the Fourth Commandment. Does it not say something about never sleeping in a bed?"

With some difficulty Muriel spelt it out.

"It says, 'No animal shall sleep in a bed with sheets,"' she announced finally.

Curiously enough, Clover had not remembered that the Fourth Commandment mentioned sheets; but as it was there on the wall, it must have done so. And Squealer, who happened to be passing at this moment, attended by two or three dogs, was able to put the whole matter in its proper perspective.

"You have heard then, comrades," he said, "that we pigs now sleep in the beds of the farmhouse? And why not? You did not suppose, surely, that there was ever a ruling against beds? A bed merely means a place to sleep in. A pile of straw in a stall is a bed, properly regarded. The rule was against sheets, which are a human invention. We have removed the sheets from the farmhouse beds, and sleep between blankets. And very comfortable beds they are too! But not more comfortable than we need, I can tell you, comrades, with all the brainwork we have to do nowadays. You would not rob us of our repose, would you, comrades? You would not have us too tired to carry out our duties? Surely none of you wishes to see Jones back?" 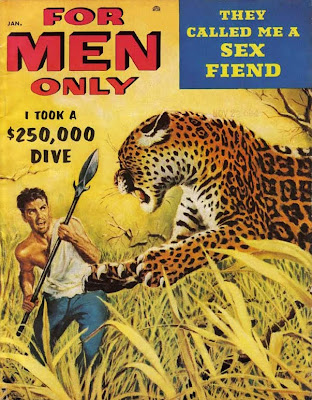