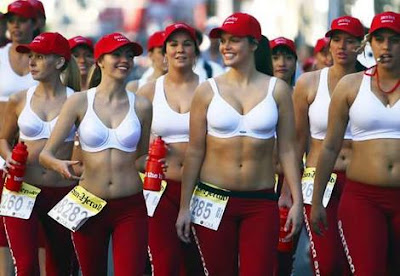 (Above: sweet young joggers out and about, determined to turn religionista males into devoted secularists).
You might have missed this story in The Sydney Morning Herald, under the header Christian leaders plan anti-Islam conference:
An evangelical church leader who blamed bushfires in February on Victoria's abortion laws will address an anti-Muslim Christian conference alongside the Reverend Fred Nile and state Liberal MLC David Clarke this year.

Mr Nile invited the leader of the Catch the Fire ministries, Pastor Danny Nalliah, to address the National Conference for all Concerned Christians on November 21 on the theme ''Australia's Future and Global Jihad'', an event Mr Nile said was about ''strengthening Australia's Christian heritage''.
Pastor Danny came to fame by releasing a press release the week after the Victorian bushfires claiming the deaths were punishment for the relaxation of Victoria's abortion laws. And way back before that he got into trouble with Victoria's racial vilification laws in 2002 by uttering a few choice words about Islam.
Mr Nile said he was not worried by the racial vilification accusation.

''I was very concerned that he was persecuted by the Muslims,'' he said. ''It was an ambush.''

Mr Nalliah told the Herald the alleged terrorist plot on Holsworthy barracks by men with links to the Somali terrorism group al-Shabab showed why Christianity should be protected ''as the core value of the nation''.

''At some point we have to draw the line and say enough is enough,'' he said. ''The nation has to stand for its Christian values, irrespective of whether all people practise Christianity or not.''

Mr Nalliah will deliver a speech on the topic ''Is the West being de-Christianised?''
Of course way back when, Paul Sheehan, columnist for The Sydney Morning Herald, was outraged at the Victorian proceedings, and celebrated Peter Costello speaking his mind to a bunch of evangelical Christians:
The man who will become prime minister in 2006 - if the Federal Government survives next weekend - is the slickest speaker in Australian politics. But Peter Costello wore his heart on his sleeve on Saturday night, May 29, at Scots' Church in Melbourne. His audience, 800 people filling the church, was evangelical Christians.

"It was the First Fleet that brought the first chaplain and first knowledge of the Christian faith to Australia. This was the critical and decisive event that shaped our country. If the Arab traders that brought Islam to Indonesia had brought Islam to Australia and settled, or spread their faith, amongst the indigenous population, our country today would be vastly different. Our laws, our institutions, our economy would all be vastly different.

"But that did not happen. Our society was founded by British colonists. And the single most decisive feature that determined the way it developed was the Judeo-Christian-Western tradition. As a society, we are who we are, because of that heritage. I am not sure this is well understood in Australia today ...

Well Sheehan was writing 4th October, 2004, so we can forgive him his profound insight about Costello becoming PM in 2006. After all, that cheshire cat grin still hasn't left us, and is fading ever so slowly.
But isn't it an amazing cheek to read Paul Sheehan today saying how Ideological passion sells us short.
In what was both a plug for the Herald, which sponsors the City to Surf fun run, and a shameless attempt to portray a Christian country at peace with itself, Sheehan manages to find only one blowfly in the ointment. Muslims.
It takes more than an hour for 75,000 people to pass by, even when they are in a hurry. Yesterday, as the record field in this year's City2Surf ran, scampered or shuffled along New South Head Road, they made an uplifting and democratic sight on a beautiful winter morning and in a beautiful setting. Diversity, frivolity, community. This is who we are - one country, one law, one common language, one community, where the great majority of people are not political, not ideological, and not concerned with dictating their beliefs to others.

This is the social glue that makes Australia work.
Such joyous bliss, but don't dance too soon. Because don't you know we have to stand up for our Christian values in a Christian country, irrespective of whether we practise Christianity or not. Is Sheehan outraged at this outrageous violation of Australia's proud secularism? Of course he is:
A surfeit of ideological passion brings problems and pain, and the reason Australia is not riven with social schisms is that the demographic ballast is provided by the apolitical tolerance of the great majority. The subcultures that do have a surfeit of desire to dictate to others are small in number. The most problematic of these subcultures are devout adherents of sharia. As believers in the primacy of sharia and the divine truth of the Koran, they are deeply compromised by living in a society built on civil law and secular customs. Our legal system is an imposition on them.
Oops, well not by Christians, even if they believe in the primacy of Christianity and the divine truth of the Bible (yes I'm talking to you gay marriage freaks and feminist abortionists), but by those fiendish Islamics.
Yep, you don't find Sheehan writing about the strange cavortings of Pastor Danny, except to tell us how hard done by he was by the vexatious Victorian legislation and expensive legal fees. But if you can be bothered, read on in his latest column, and you can find out just how much Sheehan hates Islamics, and the "argument propagated in our universities, human rights bureaucracies and sections of the media that Muslims are a put-upon minority in Australia ..."
Sheehan confounds these pious academics by shit kicking and putting upon Islamics, by way of serving up the doings of five Muslim fundamentalists arrested on terrorism charges, and the promotional activities of Keysar Trad, self serving spokesman for fundamentalist cleric Sheikh Taj el-Din al-Hilaly.
Now I don't have a problem carrying on about Trad, or the canning he got from Justice McClellan (calling him a man who incites acts of violence, incites racist attitudes, and is dangerous and disgraceful), nor do I have any time for fundamentalists of the sharia or terrorist kind.
But equally I don't have much time for Pastor Danny and his rabid Christian fundamentalism, which drew Costello's dog whistling support until he got too close to the Victorian bushfire flames in perhaps one of the more offensive remarks to emerge last summer (closely followed by Miranda the Devine's suggestion that greenies were responsible for the deaths - god or the greenies, take your pick).
Which is where all of Sheehan's blather about apolitical tolerance and demographic balance and civil laws and secular customs breaks down.
The day that Sheehan writes about the upcoming Christian anti-Islamic conference, and the gathering of the host of rabid fundamentalist Christians in the way he writes regularly about Islamics is the day he'll earn his secular stripes.
In the meantime, he's just a basher of Islamics, not caring whether fundamentalists or moderates get tarred with the same brush.
A pox on all religionistas, but above all a pox on dissembling writers of the commentariat columnist class who purport to be moderate, secularly inclined and in love with the bliss of joggers when spreading fear and loathing is the name of their game ...
You hypocrite, first cast out the beam out of your own eye; and then shall you see clearly to cast out the mote out of your brother's eye.
(Below: joggers determined to round up supporters of rabid revolutionaries, republicans and others alienated from the empire by their evil secularist convictions). 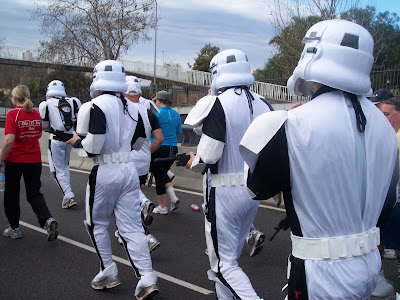