Paul Sheehan, Orwellian disingenuousness, climate change and the bruiser is back 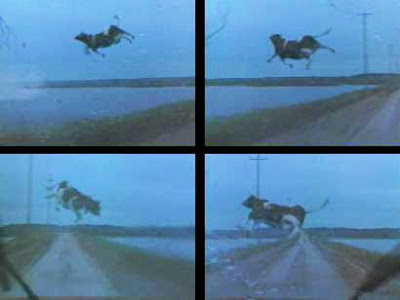 (Above: the cow in cinema, and more particularly in Twister).
A week's a long time in politics, and two weeks an eternity.
So it seems is the life cycle of columnist commentariat commentary.
Here's Paul Sheehan on June 22nd:
Because if the bruiser (Turnbull), the boof (shadow treasurer, Joe Hockey) and the bore (Pyne) represent the point of the sword of the Federal Opposition, it is a blunt instrument, a non-lethal weapon, the bluntest instrument the party has had in 13 years, which happens to be the time when Paul Keating departed and Peter Costello took control of the economy, and question time.

The bruiser, the boof and the bore look worse with Costello's pending departure, because the party has nowhere else to go for the foreseeable future ...
Who knows, maybe Sheehan woke up that day in need of a dose of prunes. But golly it was bleak, with Peter Costello leaving because he couldn't stand to watch the bruiser (Turnbull), the boof (Joe Hockey) and the bore (Christopher Pyne) lead the charge of the light brigade every day up against the Napoleonic Rudd.
It was the end of everything, toe curling time, with the world shattered into shards of bitter glass.
But as the world turns, so are the days of our lives, and there's always a new dawn in twilight's last gleaming.
So today what news? Well the prunes must have worked, because Sheehan is feeling his oats, and he's suddenly fallen in love with the bruiser (Turnbull).
By golly, it's all about Townie Turnbull's bridle waltz, and how Bill Heffernan loves Turnbull the bruiser, in a manly way of course, and how Turnbull turned up at Heffo's farm with his own saddle and bridle and rode Heffo into the ground (though not in a Brokeback Mountain way, but a manly way, as befits a man).
And while you might still be brooding over how Sheehan told us all that global warming was a myth, and climate change not a worry, because well ... shit happens on a troubled earth ... he's suddenly back to having an anxiety attack about the environment, and the way the Europeans have ruined it for the past 220 years, and now we're auctioning off water from the Great Artesian Basin, and we're all doomed.
It's a more immediate and grave crisis than global warming, which is just as well because only a short time ago Sheehan was telling us that global warming wasn't any kind of crisis at all. Now the Murray Darling has degraded, there's less rain and run off, our groundwater resources must be cherished, and if they aren't we'll all be rooned. By Saturday at least.
But Sheehan also picked up a word or two from Malcolm Turnbull's recent rebuttal of Chairman Rudd's essay, in that duel of the twanging banjo essays.
Orwellian disingenuousness is his adaptive evocation of Turnbull's dismissal of Chairman Rudd's economic meanderings as a breathtaking Orwellian disregard for truth.
And with that insight has come fresh hope, but what's this? It seems we still should have some anxiety about global warming and climate change:
Political sleights-of-hand are masked by clouds of high-sounding rhetoric. Rudd is fortunate that Turnbull is leading a party which behaves more like a debating society than a team when it comes to global warming and climate change.
Well what the heck should they do, when we all know that global warming and climate change is a myth, thanks to Paul Sheehan and Ian Plimer?
Despite this liability, on the two biggest issues facing Australia – the degrading environment and the degrading budget fundamentals – a clear choice has emerged between the visions of Rudd and Turnbull.

And Turnbull – the liberal Liberal – is emerging as more credible on both.
Huzzah, the bruiser is back, and it looks like he's ready to face the guns in the charge of the light brigade, if not the Napoleonic Rudd (and never no mind that the light brigade was charging Russian guns in the Crimea, with Napoleon long gone, it's a poetic metaphor, which is why we so love the cow as metaphor).
A credible bruiser tackling the myth of climate change. Who could ask for more?
But I wonder if Sheehan's redemptive moment came from reading Turnbull's essay, or the prospect of watching Turnbull on the ABC this evening as we see how he handled the news that the email on which he bet the bank turned out to be a fake?
Who knows, and in the end who cares. Whatever else, you can say that the scale of Sheehan's own disingenuousness and inability to remember what he wrote a week or two isn't so much Orwellian  ... as disingenuous. Or simply forgetful.
Meantime, can someone please stop Sheehan from flapping in the wind like a barnyard door, or like a storm chaser going into the eye of a tornado. Each time he gets excited, he begins to sound more and more like that flying cow in that Jan de Bont masterpiece Twister, twisting and turning this way and that ...
One week the bruiser's out, next week the bruiser's in. One week climate change and global warming is a non-event, the next week it's so hot you could burn your mouth from the disaster unfolding before your terrified eyes.
It's just too exhausting, and frankly there's no way for Sheehan to be included in my pending exhaustive and exhausting study of the cow in art, cinema and the novel.
Meantime, take it away Lord Alfred Tennyson, who sadly forgot to include a writhing cow in his evocation of attacking the Russian guns:
Half a league, half a league,
Half a league onward,
All in the valley of Death
Rode the six hundred.
"Forward, the Light Brigade!
"Charge for the guns!" he said:
Into the valley of Death
Rode the six hundred.

"Forward, the Light Brigade!"
Was there a man dismay'd?
Not tho' the soldier knew
Someone had blunder'd:
Theirs not to make reply,
Theirs not to reason why,
Theirs but to do and die:
Into the valley of Death
Rode the six hundred.
Onward bruiser, yours not to reason why, yours to do and ride horses with Heffo, and just take Paul Sheehan's love when it's on offer, because who knows how he might be feeling next week, or the week after that ...
Posted by dorothy parker at 8/03/2009 04:10:00 PM