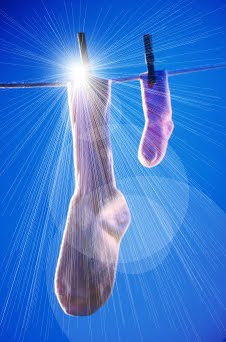 Way back in April 2009 - it seems so long ago - Paul Sheehan wrote a column about Ian Plimer's then new book, Heaven and Earth, with the header Beware the climate of conformity.
In it, he mounted as robust an argument in favor of Plimer's viewpoint as could be mustered. Plimer was Australia's most eminent geologist, capable of taking the long, long view, who had written a book which was the product of 40 years of research, and showed a depth and breadth of scholarship in its 500 pages, 230,000 words and 2,311 footnotes. Feel the width.
What follows is an intense compression of the book's 500 pages and all their provocative arguments and conclusions:
Is dangerous warming occurring? No.

Is the temperature range observed in the 20th century outside the range of normal variability? No.
And after that intense compression, Sheehan goes on to explain how Plimer is right, and not some isolated gadfly. Instead he's a prize-winning scientist and professor, glowingly endorsed by Vaclav Klaus, president of the Czech Republic and rotating president of the Czech Republic. In contrast to the current zeal around human-induced climate change comparable to the certainty professed by Creationists or religious fundamentalists.
Heaven And Earth is an evidence-based attack on conformity and orthodoxy, including my own, and a reminder to respect informed dissent and beware of ideology subverting evidence.
It was about as good a ringing endorsement and a front foot forward in the controversy as Plimer could have wished for, especially as everything Plimer said was handled with kid gloves by the gob smacked Sheehan.
Cue Sheehan this week on climate change, under the header Why Garrett can't sock it to 'em.
And somehow, ineluctably, I'm reminded of one of my favorite historical characters, the canny Pontius Pilate. You will recollect what when Christ was brought before the governor of Judea, the guvernator devised a cunning 'out' clause:
Pilate saith unto them, What shall I do then with Jesus which is called Christ? They all say unto him, Let him be crucified.
And the governor said, Why, what evil hath he done? But they cried out the more, saying, Let him be crucified.
When Pilate saw that he could prevail nothing, but that rather a tumult was made, he took water, and washed his hands before the multitude, saying, I am innocent of the blood of this just person: see ye to it.
Then answered all the people, and said, His blood be on us, and on our children.
Then released he Barabbas unto them: and when he had scourged Jesus, he delivered him to be crucified. (Matthew Chapter 27).
Now I quote this not to revive sundry biblical controversies (including the strange notion that Pilate's cunning gets him off the hook, and the Jews must take the rap for Christ's blood right down to the present day), but to note that the guv and Sheehan share rhetorical skills and have a certain skill in dissembling.
Only these days Sheehan prefers the whimsical notion of socks as a metaphor, instead of a little hand washing and hand wringing. And so it's his wife that gets to take the rap:
When the great climate debate which could precipitate an early federal election began in Parliament on Tuesday, I was folding the washing...

... I found myself with five non-matching socks, all belonging to my wife. Peter Garrett was railing about the Opposition's 13 years of inertia on the issue of climate change: ''Never has an opposition been so exposed on their inability to deliver a consistent position on climate change.''

As he spoke, I, as the person in my household responsible for all unskilled labour, was confronting my wife's sock predilections. She only buys black socks. She throws them out one at a time. She buys synthetics, which cling to everything else in the dryer. Her socks are not merely mismatched but mislaid. They hide inside the folds of other garments. Matching and rolling her socks into pairs requires time and care.
Too much information about domestic business here, but what is the import of the unfolding metaphor of the sock?
Australia has done immense damage to its own environment through its own actions. We know what must be done. As for the really big picture, global warming, the matter is out of our hands. As for the really small picture, my sock-folding and bin-sorting is going to have as much impact on global warming as this legislation.

It was a listless debate because everything that matters will be decided overseas, by the US, the European Union, China and India. Australia's contribution, good and bad, represents about 1 per cent of the global phenomenon.

Ah now I know what must be done. Nothing. We are too small and irrelevant to strut about on the world stage, and never you mind about our cock of the walk lifestyle which results in our being amongst the most conspicuous emitters of CO2 on the planet. Not to mention destroying the Hunter Valley in our haste to ship coal overseas to maintain that lifestyle choice.
Never mind if India and China, still with hundreds of millions living in poverty, look at us, and say they wouldn't mind a little bit of that indulgent lifestyle before they shuffle off this mortal coil (here).
Sheehan dresses up the rest of his column by brooding about Peter Garrett, and the way he's accepted being degutted by Kevin Rudd, in preference to Penny Wong handling the key issues of water and climate change. Well there's no doubt that's good sport - we never tire of comparing Garrett to the failed radical politician trying to drag the rusted Peterloo sword from its scabbard in the film Fame is the Spur.
Sheehan's adept at that game, quizzing a departmental Garrett lackey on the plane, and bemoaning how Garrett has been left with 2000 departmental minions to help him in his work - unlike Sheehan and his lack of minions in the carrying out of domestic duties.
It's all clever enough, if you like that kind of thing (though Ross Campbell used to do it better). But for all the talk of sorting socks, there's a sticky sense that the washing of the hands isn't working and there's a lot of grime left on my paws.
Because pretending we know what must be done won't cut it, not when everybody in the commentariat is still arguing over what is happening, as a form of indulgent political point scoring, and therefore what must be done remains profoundly confused and confusing.
And pretending Australia is such a small minnow that it doesn't have a role to play on the world stage ignores its current seminal role in showing how a "top of the world ma" CO2 emitting economy can produce a very strong, recession resistant and  pleasant lifestyle.
And pretending that Sheehan is better off sock-folding and bin-sorting might have carried more weight if way back when he'd not published his revelatory column on how he was cabin'd, confined and constricted in his thinking, while Ian Plimer struck all the right grace notes.
No wonder there's FUD in the land, and a certain listlessness, as Sheehan stands by and looks the other way.
Minion, bring me that bowl of water ...
No, minion, a bowl of water, not a picture of a nineteen thirties dust bowl. Sheesh. 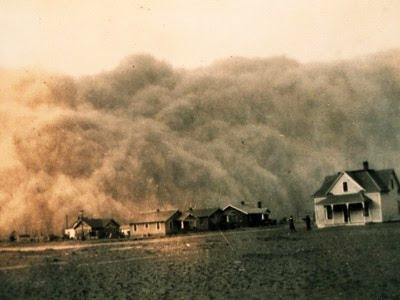