(Above: men, it's okay you can like sexy robots, even if they turn up in 1927 sci fi movies. Quentin Tarantino tells you so).
You know when someone runs a header like At last, a movie buff who says it's OK to love trash in 2009 that (a) the writer isn't a movie buff (b) doesn't have a clue about movie history and (c) is just trying to provide filler for The Punch, Australia's most Scrooge McDuck conversation, by way of yet another top twenty game.
The notional excuse for the carry on is Quentin Tarantino's top twenty flicks since 1992 list, but it's the popcorn set dressing by writer Paul Colgan that sticks in the craw:
Yes! Stick this in your eye, over-analytical movie critics: Quentin Tarantino has named his favourite 20 movies of his directing career, and it’s a laundry list of pop shtick including Speed, The Matrix, Fight Club, and Team America - World Police, while the closest it gets to a Semillon Sauvignon Blanc is the palatable Lost in Translation.

To my fellow trashy-movie-loving Philistines who have been hiding in the closet: it’s time to celebrate. Liking movies with bad guys and guns is OK. Quentin Tarantino, one of the finest directors of his generation, says so.
Oh dear. I guess young folk are always doomed to repeat history by not knowing anything about it.
Lost in Translation as a semillon sauvignon blanc you gherkin? So what on earth do you make of Tarantino's love of Woody Allen's Anything Else, in which he deploys Jason Briggs as an alter ego to perve on Christina Ricci? A ruby red rosé ?
Because way back when possums, in the time of the French auteur revolution, cheese eating and genre loving was a way of life for Cahiers du Cinema.
If it wasn't Francois Truffaut off reveling in Alfred Hitchcock, it was Jean Luc Godard getting excited about noir films, and in particular Orson Welles' Touch of Evil as inspiration for his first film Breathless.
Westerns, gangster films, Douglas Sirk weepies, anything exotic and odd and out of the mainstream "tradition of quality" (whether in France or as produced by MGM) was the fashion. That was back in the days when Howard Hawks made Rio Bravo, which Tarantino mentions in his spiel, and every film buff on the planet was off re-watching the westerns they'd thought as just entertainment when they went off to the Saturday matinee.
Why even that noted intellectual Susan Sontag got in on the game with her Notes on "Camp" (which I curiously found here).
Why she found time for old Flash Gordon comics, and announced in her final point 58, the ultimate camp statement: it's good because it's awful. While seeking to impose certain limits and conditions.
So what's Tarantino got to offer in his top twenty? You know, trash that you can love in the way devotees have been loving trash for generations.
Dogville?
That wretched exercise in half baked theatrical cinema, announcing the imminent demise of Nicole Kidman's career as she wanders through the expressionist scenery-less contrivances of the pretentious Dane Lars von Trier?
Whatever, but if this is one in the eye for over-analytical movie critics, I'd like to revise Sontag's definition. Sometimes a show is simply bad because it's awful.
What's worse? Well in his transcription Colgan mis-spells the title for Friday (calling it Fridays), seemingly unaware that Fridays is a late unlamented TV series dedicated to live comedy sketches, while Friday is F. Gary Gray directing Ice Cube in his script (along with DJ Pooh) and featuring Chris Tucker. It's an excellent comedy, though the less we say about the sequel Next Friday, the better.
And if we were actually talking about trash movie loving Philistinism, why not a mention of any Paul Verhoeven movies, like Starship Troopers, or the deliberately trashy movies of John Waters, from Pink Flamingoes through Female Trouble and Polyester to Hairspray?
But you see that's because Quentin Tarantino is a film buff and he's talking about films he likes, which might range from the excellence of Boogie Nights or gulp the European exoticism of Lars von Trier, through to Team America, Speed and Police Story 3, along with his fetish for Asian cinema of the martial arts kind.
Random and incoherent it might be, but it's not a trashy movie loving Philistine list. That's what Coglan's come up with as a way of getting a conversation going, and it reflects the determination on the part of The Punch to be as anti-intellectual as it can.
On the basis that ponces love poncy pretentious movies in an over-analytical way, while ordinary people, real people, love really trashy movies in a Philistine way, and where's the harm in that? Come on down Sarah Palin, your Aussie blog awaits you.
Liking movies with bad guys and guns is OK. Quentin Tarantino, one of the finest directors of his generation, says so.
Dear lord has it come to this? Well liking science fiction in movies is okay too. Fritz Lang, one of the interesting directors of his generation, proved it in 1927 with Metropolis.
I could go on, and on, but suddenly my heart sinks. It's all too hard. Australia's best conversation? Only if you mistook Tim Blair for an intellectual.
At least one of the punters chipped in with Chopper and Pan's Labyrinth, but I've got to stop torturing myself by dropping into The Punch.
Sadly, nobody seemed to have a kind word for the Coen brothers, who kicked Tarantino's ass in their Blood Simple, Fargo days, and he knows it. Complete with guns and bad guys! Sic transit Coens.
What else have they got in this Chairman Rupert experiment to lure us behind the pay wall?
"Detox" the new code word for dangerous dieting.
Sorry seems to be the hardest word - the art of the apology.
Kids' sport should not just be about winning.
Screams for help - the silent bullying epidemic.
With bonus thoughts by Scott Morrison, politician, on interest rates, Anthony Albanese, politician, taking the iron bar to Wilson Tuckey and his mob, and Alastair MacGibbon lathering up fear about internet security.
Okay, please open the envelope. And the winner for the title of Australia's best conversation is ....?
New Idea.
Mere Male was always such a hoot.
Sob, reduced to sexism by The Punch. Must go and put on restorative movie. Something with Cedric the Entertainer in it, so I can be wise about socio economic and cultural tendencies in the black community in America while also getting a laugh.
(Below: Cedric the Entertainer be the man, and here he be in Barbershop). 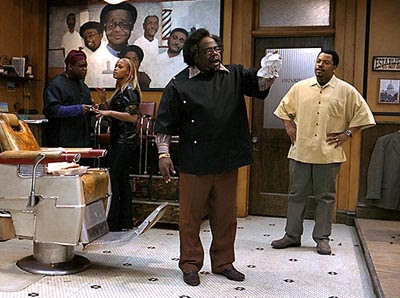