1. An impractical idealist: see theorist.
2. An often blindly partisan advocate or adherent to a particular ideology.
3. One given to fanciful ideas or theories, a theorist, a spectator.
4. Someone who theorizes, especially in science or art.

We do not have too many ideologues, but too few.
Oliver Hartiwich, Say it like you mean it, we love a bold leader, Sydney Morning Herald
Well yes Oliver but we also don't have enough columnists with a grasp of the meaning - the shared understanding of the meaning - of the English language, or at least some words within it. Such as ideologue.
The beauty of true ideology is that it provides answers where others still need to think about the questions. There is no a guarantee that these answers will always be right. However, from a voter's perspective it is still an advantage to be able to choose politicians who know what they want. With an ideologue you can at least be sure that what you see is what you get.
Sure and I hate to break Godwin's Law, but that was about as good an argument as the Nazis ever managed to mount for voting for them (until they got rid of the silly notion of voting).
WTF? Instead of saucy doubts and fears, we're all better off with a loon who drives us off a cliff, just because he thinks he's right and strong about it. Golly, the lemmings finally have their philosopher.
Come on down Friedrich Nietzsche. Or should that be Ayn Rand? And do we then follow the logic, as with any strong leader, who suddenly understands that the vast bulk of the electorate are mindless sheep who need to be herded to the shed for shearing (or the abattoir after a decent fattening period)?
Come on there must be a reason to misuse the language and mount silly arguments about the wonders of being sure what you get in a politician - when you order up a blindly partisan, impractical, theorizing ideologue.
Silly me, of course, it's just so you can do the usual stuff about spin doctors and opinion polls and focus groups and politicians responding to the electorate, often with the help of advisers. And of course their changeability.
So much better if they just say damn it all and keep on charging the Russian guns like the light brigade. Pity about the dead five hundred, but there you go, at least they knew where they rode and died.
Think I'm joking about a man preferring black and white, never mind if we see the world these days in color?
With most present day politicians, on the other hand, what you get does not depend on their beliefs but on their advisers. All on their own, without focus groups, spin doctors and opinion polls, they are like fish out of water.

Modern politicians have elevated unpredictability to a virtue. They boast about being economic conservatives one day and pose as traditional social democrats the next.

In our post-ideological age political positions have become interchangeable. Is Rudd's emissions trading scheme policy really so different from the one Malcolm Turnbull had when he was environment minister? Would the Coalition really have handled the economic crisis any differently than the Labor Party?

For politicians there is no safer place in public debates than the non-committal centre ground. Cosy consensus politics has become the rule, not the exception. Deviating from mainstream positions is the equivalent of political suicide. This is not only an Australian phenomenon.

No one has exemplified ideological non-commitment as much as Angela Merkel, the German Chancellor. In an interview she summed up her non-philosophy like this: "Sometimes I'm a liberal, sometimes I'm a Christian socialist, sometimes I'm a conservative." Next to Merkel, even a chameleon would blush.
Oh yes, let's return to the good old days of the nineteen thirties, where you knew where a Stalinist or a Nazi ideologue stood. Instead of this wishy washy do gooder liberalism.

I quote Hartwich at length because his determination to find a strong minded fool to lead us - whether they've got the right answers or not - is wonderfully awesome in its simple minded way. It reminds me of a dork arguing that black is white, until, being a contrarian, he's requested to argue that white is indeed black. Never mind the truth of the matter, just make sure you do it in a strong minded way.
Hartwich is inspired by the arrival of Baron Karl-Theodor von und zu Guttenberg as Germany's new Minister of Economics, and hails him as an ideologue.
Well he says that Guttenberg's opponents tried to portray him as an ideologue. And claims the campaign failed compleely when it realized that this was why the public loved their new political superstar.
Eer, actually, according to Hartwich, the reasons the public likes him are somewhat different:
Modern politics sometimes looks like a refuge for cowards, conformists and consensus fetishists, and Baron Guttenberg's surprise popularity demonstrates that it need not be this way.

The public is thirsting for political leaders who dare to speak their minds.

But, but, but daring to speak your mind, isn't actually the same as being an ideologue. At least if you respect and pay attention to the meaning of words, as defined in a dictionary. Of course if you're Humpty Dumpty, you just pay your words a little overtime, and they mean what you want them to mean.
Feel free, and why not spend a little time with the caterpillar as well?
But ideologue doesn't mean a braveheart (as opposed to coward) a non-conformist (as opposed to conformist), or a non-consensus anti-fetishist (as opposed to consensus fetishist), in much the same way as it doesn't mean plain speaking.
If only commentariat columnists could produce something like verbal clarity, our political debates would become much more interesting. As it is, Kevin Rudd is right to go on fearing ideologues, and the rest of us will just have to mourn the absence of plain speaking.
Next week, how liberals are fascists, and the Nazis were communists, if not socialists, and all of them are ideological ratbags, except when such ideologues attempt to indulge in plain speaking ...
Oliver Hartwich is a research fellow at the Centre for Independent Studies. Say no more. 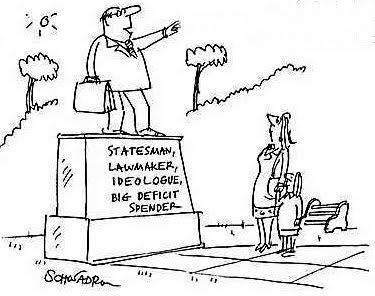