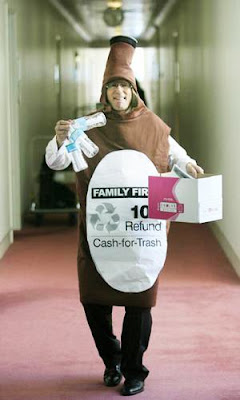 (Above: Senator Steve Fielding purporting to worry about recycling when we all know that this is an anti-capitalist plot by socialists intent on stifling the market economy. More litter, I say, so we can save China, sustain two dollar stores and keep the coal flowing).
Ring the bell, and salivate like Pavlov's dog, because Saturday is Miranda the Devine day, and she never fails to please.
And by golly, she comes out punching in a feisty display of hubris in Bring it on, Labor, pull that trigger.
Devine's central thesis is three fold. Global warming is a myth, and Australia shouldn't worry about it.
Alternatively, if that's a mistake and global warming is real, never mind, Australia is too small to do anything about it.
Alternatively, if global warming is real, and never mind if we're too small to do anything about it, Malcolm Turnbull is the big man who is able to do something about it.
All of which conclusively proves that the time is right for the Liberals to front up to a double dissolution campaign, and the sooner the better. QED.
This is sometimes called the cascading shifting sands school of debating technique, a bit like that marvellous magical crane kick delivered at the end of The Karate Kid.
No opponent can withstand its scintillating, withering power.
As Barnaby Joyce reminded everyone this week, by winning the "unwinnable" 1993 election, Paul Keating showed John Hewson how difficult it was to go to the Australian people with a new tax - which is what the emissions trading scheme is - an energy tax.

Um, okay, so you'd have to be pretty silly to front the Australian people with a new tax as a key part of your portfolio of policies. Right? Wrong, you dummy, don't you understand anything?
In Turnbull, the Coalition has the perfect man for the job of winning an election on an energy tax. He is enough of a genuine climate change alarmist to reassure green-minded voters, yet he is also a successful capitalist who knows the value of preserving a healthy economy.

Crafting complex deals, such as an ETS that might work, is his forte.

Ah, so you can go to an election with a tax, and win hands down! With ETS that might work?Even if it's totally useless, superfluous and unnecessary.
But would it be wise to make the legislation palatable? Why bother? Because Malcolm's a genius at pulling rabbits from hats, even when there's no rabbit in the hat:
It's probably his only chance of being prime minister, so he will fight for all he's worth.
An early election will also force the Coalition to rally behind its leader, removing the unsettling effect of all that free speech they are currently engaging in. Plus it's just the kind of reckless gamble for which Turnbull is famed, and which he occasionally pulls off. It's right up his alley, if Utegate hasn't taken all his bottle.
Now only Miranda the Devine could juxtapose an image of Malcolm Turnbull as being famed for reckless gambling, then mention that he occasionally pulls the gamble off, then note the style is up his alley, then hastily add as a postscript - if only a reckless gamble hasn't taken his bottle.
That kind of juxtaposition is part of the inexplicable charm of reading the Devine. And as always, there's more. Because everybody from sceptic alley is now rallying around that loon Senator Steve Fielding, promoted to parliament by creationists of the Family First kind, as he provides a nesting place for dissidents and sceptics (snatching them away from their natural home in loon pond, the fiend).
And industry and the Australian people have rallied to his cause:
You can bet money from industry would roll into Coalition coffers to help fight such an election, easily rivalling the union advertising largesse against Work Choices in the last poll.

And as Steve Fielding has found from the supportive emails and letters flooding his office, the public mood is turning resolutely against rash measures to stop climate change.

A Newspoll last month found 53 per cent of Australians want the Government to delay the ETS legislation until after Copenhagen, or not introduce it at all. Six per cent are uncommitted.

Only 41 per cent think Australia should pass the legislation before Copenhagen.
Rollling in money, cards and letters flooding in, polls showing a resolute, determined mood!
It's a charming, beguiling view from a parallel universe.
Now while this site isn't a strong believer in Newspoll figures, even a cursory reading of the latest numbers (Malcolm Turnbull's approval takes a new hit in Newspoll) must make you wonder just what the Devine has been taking in recent days.
Chairman Rudd's lead over Turnbull as preferred prime minister stood at 65 to 17%. While the two party preferred split remained at 57 to 43.
Turnbull and the Liberals are cruising for a bruising at the moment, and they know it, and they need time to turn things around. Especially the good ship Malcolm, who looks alarmingly like the Titanic on any given day.
The last thing they need is the kind of hysterical, illogical support offered up by the Devine.
Especially when Devine is busy recycling all the old bits of business about climate change, as if somehow they were new discoveries (funny, when I thought they'd been discovered and settled by Ian Plimer months ago, yet now he doesn't even get a mention in that section of the Devine's diatribe).
And worse when she starts circling the wagons around Steve Fielding, as if he's some kind of searcher after truth, as opposed to being a grand-standing twit.
You can spot this when the Devine gets on the case and harks back to the persecution of communists (and why does she think that's so bad?) to evoke the persecution of climate change sceptics:
... we have McCarthyist bullying of critics. At least Fielding, an engineer, is strong-minded enough to seek his own answers.
As it happened on Wednesday, the day before the vote, just 13 MPs and senators showed up to the debate he organised that had become a one-man talk by Carter. None were from the Government. Just 6 per cent of the Parliament could spare an hour to hear what the fuss was about.
A strong-minded engineer? Well I'm an expert in baking sponge cakes, and I still don't think I could have found the energy to attend a seminar organized by an arch loon, clearly out of his depth, but always ready to pursue self-promotion now he's formed a taste for the limelight.
The thing that's stuck in the Devine's craw is of course the way the government's scientific adviser Will Steffen refused to turn up to the Fielding circus to play the clown, and instead sent a letter to Steve Fiedling telling him that the scientific analysis he was supporting was hopeless. Perhaps even unworthy of high school students. Or clowns.
The Devine immediately conflates the idea of attending a seminar - to get involved in a down and dirty slanging match - with the scientific method:
Steffen's attitude flies in the face of 1000 years of scientific method - of open inquiry, of encouraging the objective search for truth, sharing knowledge, testing hypotheses, welcoming challenges in order to demonstrate the robustness of your theories or help you develop new ones.

Um, Miranda, people shouting at each other doesn't really encourage the objective search for truth. HEAR ME?
But never mind, let's get back to kicking the quasi religious believers in climate change. Sorry, scrub that, it's now an industry, a sheltered workshop:
Something stinks in the climate science industry. The confected sense of urgency. The comic predictions by the United Nations that we have only "four months" to save the planet or that next year as many as 50 million climate refugees will be "displaced" by human-caused climate change. The fantasy that imposing a new tax on Australians will make any difference to the age-old phenomenon of climate change.

Which I guess is a bizarre fantasy when you think about it, almost up there with the notion that Malcolm Turnbulll will come up with a new tax that will be effective and solve global warming and cause joy amongst the Australian people and fix the ETS ... and lead the Liberal party out of the wilderness, and into power, and all within the year.
Now that's a fantasy. I want some of this aphrodisiac, and I want it now.
Thanks to the Devine however we now know what the fuss is all about, and fortunately it doesn't have anything to do with global warming, the state of the planet, Steve Fielding, Ian Plimer or the whole damn thing.
So what's the big hurry? In the Senate on Thursday after losing the vote, Penny Wong revealed the reason: "Because if we don't [bring the bill back in November], this nation goes to Copenhagen with no means to deliver on its targets.'' It's to give Kevin Rudd something to strut with on the global stage.

Ain't it wonderful you can reduce the whole world of debate about a significant issue to  one man and his ego, and then stick pins in the straw man while muttering voodoo incantations?
Well, there it is. Read the original for the full flavored logic of the rant, and marvel that this is what Fairfax wants to put behind a paywall as an inducement to stump up cash. Well we'll see about public opinion when that comes to pass ...
(Below: cartoon by Nicholson in The Australian, a newspaper. More Nicholson here at his website. Why not give him a click rather than Chairman Rupert?) 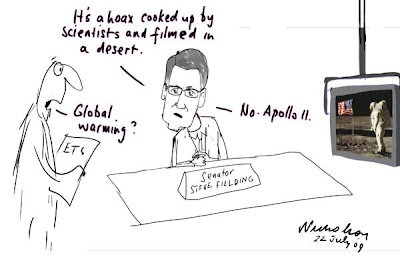