Miranda Devine, Janet Albrechtsen, behavioral disorders, the plight of boys and anxiety attacks coming at ya 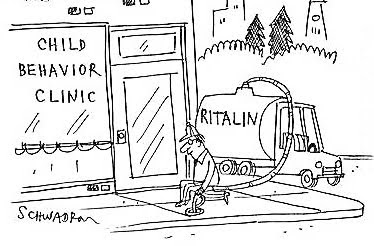 It's war.
Commentariat columnists take sides in a psychological smack down brawl which makes the return of boxing to free to air television look like a game of tiddlywinks.
On the one side is Janet Albrechtsen: Don't shrink wrap the kids.
On the other is Miranda the Devine: Match the treatment to the malady.
Who is right, who will reign supreme?
Here's Alrechtsen on childhood mental disorders:
Is it possible that the real sickness lies with a society that diagnoses an increasing variety of common childhood behaviour as a disorder? Perhaps we should label modern society as suffering from ODD: obsessive diagnosis disorder.
In 1980 the American Psychiatric Association came up with the label oppositional defiant disorder as a medical diagnosis for a child, as young as three, who exhibits at least four of eight behaviours, including being easily angered, arguing with parents, having frequent tantrums and deliberately annoying others.

Once upon a time children who behaved like this were labelled naughty. Now they are diagnosed with a medical disorder. But they are not alone.

The US surgeon general’s report on mental health published in the late 1990s lists a smorgasbord of disorders. While some are serious mental illnesses, such as the eating disorder anorexia nervosa, others are more imprecise, so imprecise I could easily attach the name of someone I know who, though perfectly normal, fulfils enough of the criteria of a disorder to earn a sickness label.

Here's the Devine on the plight of young boys and the diagnosis of depression:

The system is based on the American Psychological Association's Diagnostic and Statistical Manual for Mental Disorders, known as DSM by mental health professionals, and now in its fourth iteration - DSM-IV. Parker has been complaining so vigorously about the DSM classification of depression, he has been appointed to the panel controversially revising the criteria for DSM-V, by 2012. (Psychiatrist Gordon) Parker and Black Dog have devised an alternative classification system, with three types of depression - the essentially biological conditions of the brain, which he describes as melancholic and psychotic depressions, and a third type he calls "non-melancholic" which relates to personality type and external stresses.

He believes that certain personality styles - from ''perfectionistic'' and ''irritable'' to ''anxious worriers'' - predispose some people to develop mood disorders under stress, each with its own ideal treatment.
And when you cut to the chase and get down to it all?

Parker says one in five Australian children has "significant mental health concerns", and suicide remains the third most common cause of death in young adults aged from 18 to 24. It is no time to be complacent.

Back to Albrechtsen, identifying perverse incentives as a major problem:
The study’s results are a lesson in the perverse incentives of poorly directed government handouts. When schools are given additional funding based on the number of disabled students, the rational response is to inflate the number of disabled children by relying on over-diagnosis of disorders with ambiguous criteria.

As the study found, parents wanting to enrol their troublesome child in a regular class are encouraged to “tick the highest boxes” in applications for support.

No matter what the problem, government handouts are never a risk-free panacea. Whether government is handing out subsidies to make a green car, offering welfare to indigenous people or supporting payments to schools for disabled students, the money risks creating its own set of perverse, unintended consequences. The trick is to target funding carefully to those in need, without creating a new set of problems. Allowing money to flow to an increasing range of childhood behaviours, over-diagnosed as disorders, does nothing for children who will walk around with damaging labels. More important, it does nothing for the disabled who genuinely need more support.

I'm not exactly sure what study Albrechtsen was referring to. When I went on a hunt for it, I found Dr. Linda Graham at Macquarie University, who has prepared a paper on School disability funding, about which you can find a Life Matters report here. And you can get her 9th May article in Education Today here. (What is it with Murdoch people refusing to link to their sources?)
But it's interesting to compare and contrast Albechtsen and Devine. Albrechtsen's hobby horses turn out to be parenting and diagnosis:
The combination of a few modern trends has brought us to this point. Start with modern-day parenting. For the past few decades, discipline has become a dirty word. Given the increasing reticence to discipline a badly behaved toddler or impose sensible limits on a 15-year-old, is it any wonder that there are more badly behaved, wayward children? So-called progressive parenting says a parent should aim to be their child’s friend rather than a parent who imposes draconian rules. The expectation is that a child will be a pint-sized adult with whom a parent can always reason. If only.

Two things are happening here. We end up glorifying a norm that suits parents and increasingly diagnose difference from that norm as a disorder. We seem to have forgotten that childhood behaviour naturally runs the full gamut that includes the consistently naughty, rebellious and rude.
And of course there's the slow demise of personal responsibility:
How much easier it is to slap a label on a wayward child than confront the need for parents to improve their parenting or expect a child to take responsibility for their actions.

Not to mention canny children gaming their parents or gaming the system as a way of seeking to avoid responsibility for their behaviour. Not to mention professionals gaming the funding system, with schools pursuing extra funding by diagnosing behavioural problems.
Whereas Devine isn't quite sure what the problem is, except that it somehow involves the terrifying brave new world of gender relations, and a suspicion that boys and young men are the victims of a toxic culture. Not much room here personal responsibility or quiet contemplation of the way rugby league celebrates manhood:
Previously, he (Parker) says "boys cloaked their insecurities by swaggering and acting in hairy-chested ways [when] girls were modest and non judgmental … Girls are not the sexually demure creatures they used to be. [They] are inclined to criticise and there is a lot of anxiety for boys."

This new view of boys as the psychologically weaker sex has been long reflected in suicide statistics, in which males outnumber females four to one. For years, our boys and young men have been the canaries in the coalmine of a toxic culture, quietly doing away with themselves when they can no longer face their lack of self-worth.

So it seems it might be toxic culture that's the problem after all, reducing boys to hapless anxiety attacks in the face of rampant Amazonian young women (who haven't understood the demure beauty of the TV show Ladette to Lady):
In the "pre-dating" phase of early adolescence, he (Parker) finds over the past decade boys have become anxious about how to relate to girls their age, who have become more assertive, confident and ''ruthlessly objective''.

"When they're rumbling with their mates and playing sport boys understand [what's happening] but when it comes to girls they feel lost," Parker says. "They don't know how to behave with girls and how to be appropriately assertive" without being predatory.

Yep, while it might also be a question of diagnosis (or mis-diagnosis) and treatment (or mistreatment), or a need for professional help or just a judgment call that it's adolescent moodiness, modern society and all its technological ills carries the can for Devine:
New pressures on teenagers today exacerbate the difficulties of adolescence - from the internet and mobile phones to premature sexualisation, higher rates of divorce, designer drugs and the "downsides of affluence". A "Boys at Risk" conference at the north shore private boys' school Shore in October will address the particular vulnerabilities of boys.

Well at the end of it all, I'm completely confused. I think I know where Devine and Albrechtsen are coming from and going to, but do I understand what's ailing young boys in particular or more generally children with behavioural disorders?
Not really. But I do have an overwhelming anxiety attack, and a sense that everything that could go wrong might well go wrong. Pass me the prozac.