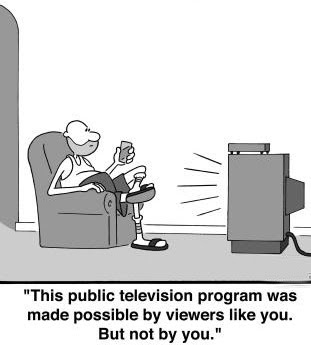 The ongoing campaigning of the Murdoch empire for total control is a restless, wondrous, ever moving kind of activism, a marvel of singing from the one song sheet in the search for market dominance.
It isn't just the need for the population to pay for newspapers online, so that the empire can carry on its self-appointed task of monitoring politicians (while not minding too much whatever malfeasance business can manage).
No, it's also vitally important that the populace must be persuaded of the efficacy, nay joy, of paying for television.
Now there's a problem with this. Some people are happy with public broadcasters, while others accept the trade off between commercials and free to view content. This kind of indolent, ungracious preference of joe public for free use of airwaves considered public property and licensed to a few owners to make money is a serious problem.
We might call the problem "people power". Because as we know power to the people is a dangerous leftie delusion, sloganeering off the back of democratic populism of a kind that promises we'll end up with a ratbag demagogue like Silvio Berlusconi.
Oh wait, got that wrong. He's a media mogul and nothing wrong with that. Just like Rupert Murdoch, who owns a significant share of Foxtel, along with Telstra and Consolidated Media.
Well James Murdoch has already kicked the BBC can, and received a little return fire (Peston responds to Murdoch's BBC bashing).
So where better to learn about the problems of "people power" than to turn to Mark Day in The Australian, a News Corp rag, in Yankalilla TV woes:
People power is a wondrous thing. There is no constitutional right that says we should all be able to watch the football grand finals or the Melbourne Cup live on free TV, or even that we should get a TV service at all, but it’s a popularly held belief and woe betide any politician or government seen to be meddling with that “right”.
I saw people power in action last week when I joined more than 100 residents demanding their “right” to digital TV.
Oh vexatious democratic demagogues. You have no right to anything, unless of course you pay Uncle Rupert for it. After all, as we all know, the only safe way to guarantee the delivery of anything independent is the profit motive. (You know, like a serious critique of the power and influence of Chairman Rupert. You'll find that at least once a week in the Murdoch press).
Ostensibly Day is concerned about the citizens of the exotic hamlet of Yankalilla:
Three months ago I wrote about the mayor of the Yankalilla District Council whipping up a scare campaign in his region by telling ratepayers they were about to lose their TV services. It’s nonsense. It’s not going to happen.

The cleverness of Day is that he uses the distraction of Yankalilla's 'black spot' plight in relation to the delivery of digital television to carry out a more important task - argue for the removal or limitation of the much hated pay-TV anti-siphoning list. The meat and potatoes is in the second half of the column:
Meanwhile, the Productivity Commission’s review of anti-siphoning measures will be presented today to Assistant Treasurer Nick Sherry.
There is no reason to believe the commission’s view has changed greatly from its draft report that calls for a substantial reduction in the events listed.

This list, the bane of the pay-TV industry, is a classic example of people power in overkill.

Pesky dangerous stirring democratic demagogues in action once again, caring about their pockets and the god-given right of Australians to watch sport for free, while moaning about (or being entertained by) the advertisements jammed into the prime viewing spectacle. So prime that sporting events have had to switch their times to suit the FTA broadcasters. How dare the people power people talk about free.
During the protracted arm-wrestles between free-to-air broadcasters, the nascent pay-TV industry and regulators in the 90s, politicians imagined the hue and cry that would follow if, say, Foxtel snapped up the rights to AFL or NRL and took everyone’s favourite sport off free TV.

Now why on earth would they think that, given that Chairman Rupert is ever so caring and sharing?
They took their cue from events in Britain, where BSkyB (part-owned by News Corporation, publisher of The Australian) snapped up rights to the English Premier League football (soccer) and used its popularity with viewers to drive subscriptions.

That was an example of the commercial markets working in an unfettered fashion, but it was too much for the local pollies to contemplate, so they created a list of sporting events that had to be shown first on free TV.

You see? Greed and commercial cupidity is just the markets working in an unfettered fashion. As if sport has any other meaning than to tickle the till.
It remains the most extensive list in the world, with 1300 nominated events, and the most stupid, given that 77 per cent of the protected sporting events are not shown on TV at all.

The free-to-air operators now want to use their secondary digital channels to show sport. This is currently banned under the same logic that kept sport off pay-TV: that audiences for digital channels were too small.

Yes, and there's the rub. The sporting channel One, operated by the Ten network, is having an impact. Why last night if you were Tim Blair, you could have seen the grand prix live, while the main FTA channel ran the event on delay, pitching the result to much later in the viewer evening.
In these days of remote controls, even the dummies can learn to roam up and down the mushrooming FTA channels, which are starting to look more and more like - gasp - a free equivalent to the mushroom channels gathered together on pay TV. So many channels, so little to watch.
The Productivity Commission says the anti-siphoning list is overly burdensome, anti-competitive in that it “directly limits competition between subscription and free-to-air networks”, denies revenue to sporting bodies as a result of that lack of competition for rights, and has a limited effectiveness.

“The list appears to be unnecessary to meet the objectives of wide consumer access to sports broadcasts,” it says in the draft report, adding “it may actually reduce consumer access”.

Oh yes, a thousand new sports will blossom, and money will rain down on all sports, and it will all be spent on making children healthy (as opposed to wasting it on star power sporting types paid huge amounts of moola because of their drawing power). Provided of course that you're prepared to pay for your access. Stand by for the wrath of those foolish, disgruntled people power people.
The commission says the option to abolish the anti-siphoning regime should be explored, but as an interim measure “the burden imposed by the regime should be alleviated by substantially shortening the list and simplifying the process”.

The anti-siphoning rules are to be reviewed by year’s end and any changes will come into effect at the end of 2010.

And why should politicians embrace the Productivity Commission? Easy peasy:
When these rules were constructed, pay-TV had penetration levels in single figures and there were no digital multi-channels. Now more than 50 per cent of houses are digitally enabled, and pay-TV levels are about 35 per cent. Both figures are rising.

Soon, any political rationale for an anti-siphoning list will be gone.

Well you might ask exactly what digital enabling has got to do with it all, and of course we're back to this new capacity for FTA to run much more sport than it did in the old five FTA channel days. But they'll have to pay for the pleasure, and in the meantime, with the anti-siphoning list abolished, cherry picking as a way of establishing a 'must have, must watch' element in programming will become a key part of the game.
The Productivity Commission recommendations should be embraced forthwith and the list abandoned at the end of next year.

I'd allow no more than three months after that for the first scandal to erupt, where the good people of Yankalilla rise up in arms to complain about a much loved sporting event switching codes, so to speak, and ending up in the outstretched, ever loving, high paying arms of cable TV.
And who will benefit? Why the established sports on the 'must watch' list and their already highly paid prima donnas. If tiddly winks thinks its world championship in Melbourne will get televised, tell them they're dreaming (no, to my knowledge there's no such event scheduled for Melbourne, but I'm throwing it out there, just dreaming and wishing and hoping).
Yep, you can't make a leopard change his spots, and the desire to do a BSkyB here to drive subscriptions will be irresistible. And then people power will erupt - you know, those foolish people who think in a democracy they somehow have entitlements and rights, when the only right they have is to fork over their cash to Chairman Rupert. Let that be a lesson to you. There's no need for a Bill of Rights in this country when the only right that matters is the greater good of News Corp.
And then the politicians will skitter and dance, while the tech heads will have already discovered the best way is to use a proxy server to get hold of the internet stream. Well if you can do it for Hulu, you can do it for the Blackburn Rovers.
Oh intertubes, you and your foolish people power. You've already ruined everything by somehow suggesting people can get content for free, including Chairman Rupert's content, and caused Mark Day no end of restless sleeps and nightmares.
Please just shut up and pay the Man what he's owed. On a regular weekly basis. You'll hardly notice the lightness in your wallet, the sense of freedom in your purse.
And all will be quiet and well in Yankalilla, with the government delivering the digital connection and Chairman Rupert delivering the content ... for a price. 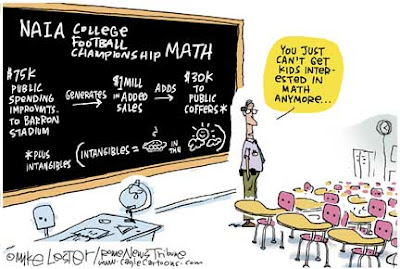