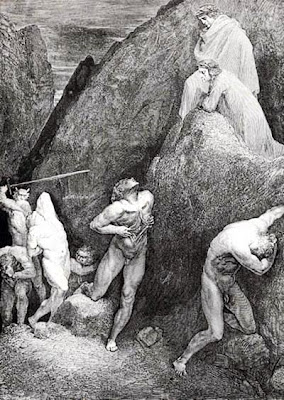 (Above: Gustav Dore. Christopher Hitchens: Islamic art contains many examples—especially in Iran—of paintings of the Prophet, and even though the Dante example is really quite an upsetting one, exemplifying a sort of Christian sadism and sectarianism, there has never been any Muslim protest about its pictorial representation in Western art. See below.)

The thing that struck me about the Danish cartoons that caused such a fuss in the Islamic world was that they were in general terrible.
If there was a case for a riot, it was about their aesthetic and satirical quality (if you want to refresh your memory of them, they're here at Conservative Underground). The reality that a couple of hundred of people died in the ensuing riots is both remarkable and sad, since no kind of stern canonical criticism - literary or otherwise - is actually worth dying for.
Now even more remarkably comes the news that Yale University Press is publishing a book about the cartoons, and the storm they aroused, while in the process censoring the cartoons again - by deleting them from the book. Let Christopher Hitchens in Slate take up the story of the book The Cartoons That Shook the World, by Danish-born Jyette Klausen, professor of politics at Brandeis University, under the header Yale Surrenders:
Yale University Press announced last week that it would go ahead with the publication of the book, but it would remove from it the 12 caricatures that originated the controversy. Not content with this, it is also removing other historic illustrations of the likeness of the Prophet, including one by Gustave Doré of the passage in Dante's Inferno that shows Mohammed being disemboweled in hell. (These same Dantean stanzas have also been depicted by William Blake, Sandro Botticelli, Salvador Dalí, and Auguste Rodin, so there's a lot of artistic censorship in our future if this sort of thing is allowed to set a precedent.)
A book about controversial cartoons with the cartoons removed? And this kind of ancillary damage to other artists?
As Hitchens notes, the original intention of limiting representations of Mohammed by Muslims was "the rather admirable one of preventing idolatry" - on the basis that people might worship the man and not the god of whom he was claimed to be the messenger.
Compared to the holy Roman Church, and its cults - that of Mary being a prime example, but thousands other saints also turn up amongst true believers - it actually makes sense of the bible's commandment to have no graven images in front of you when indulging in a bit of worship.
But as Hitchens also notes, if you're not a believer, perforce all bets and injunctions are off (in much the same way as I feel free to publish Piss Christ, and where's the harm in that, especially as it's quite a lovely image by a practising, believing Catholic).
Now it's true that - as a result of this stand - when you get an historical epic about Islam like The Message you don't get crass images like those produced when Jeffrey Hunter flashed his blue eyes in King of Kings, but pre-emptively excluding the controversial cartoons from a book about the controversial cartoons is weak kneed defensiveness of the most wishy washy kind.
A picture paints a thousand words, and banning the cartoons from the book ostensibly about them means you have to refer outside the book to find out what the book, and the fuss, was all about. Now the book will appear with a note from Klausen:
Klausen argued against Yale's decision, but in the end acquiesced in the face of Yale's insistence that more bloodshed would be likely to follow republication of the cartoons.

But she did not agree when Yale went further, editing out historical artworks showing the seventh-century prophet. Many Muslims object to any depiction of Muhammad.

The book will appear with an author's note from Klausen, who says Yale's decision is a violation of academic freedom and a case of ''anticipatory fear on the part of the university of consequences that it only dimly perceives''.

''The metaphor I use is the monster in the woods: you can't see it at night but you know it's there, and if you provoke the monster, it's your responsibility,'' she said. (here).
What's even more ironic is that she only wanted to reproduce the original Jyllands-Posten page featuring the cartoons published on September 30, 2005, about as harmless and low key way of including the cartoons as might be imagined (and which you can find, along with the cartoons here).
The bizarre thing is that all this information is available on the intertubes, but perhaps not if Senator Stephen Conroy has his way and decides to ban pages dealing with sensitive philosophical, political and theological matters.
Yale's representatives have talked of wanting to avoid blood on their hands, which is roughly equivalent to the silences maintained during the Salem witch trials or the McCarthy-ite fever. It isn't the fault of those who want to discuss dissenting ideas if fundamentalists decide the best way to produce harmony and silence is to riot and kill people.
Some have tried to tag the debate to conservatives, when in fact conservatives are often first to the barricades demanding that offensive matter be banned, at least when it applies to Christianity, sex or similar shocks to their morality system. Indeed the mind set of conservative Islamics and Christians is sometimes remarkably and disturbingly similar. Same god and same lock down shut down mode.
Just because fundamentalist Christians or conservatives might rejoice in the discomfiture of Islamic believers, or just because there is a vague perception that there might be turmoil, there's still no excuse for Yale to be so lily livered. You'd think the days of hiding controversial matters at the back of a library with access by special appointment had begun to die away, but it appears not.
Ironically one of the cartoonists involved in the scandal has done a Salman Rushdie, and now suffers for his cheek (Danish Caricaturist of Muhammad Fame Now Homeless):
Draw a picture offensive to Muslim extremists, and you might find yourself without a roof. Ask Kurt Westergaard, one of the twelve Danish cartoonists whose autumn 2005 Muhammad caricatures lead to violent protests throughout the Muslim world. He was booted from his police-protected hotel room on Feb. 15 for being "too much of a security risk." And now the 73-year-old cartoonist and his wife are without a place to live.
Westergaard was forced to leave his actual residence in November after the Danish security and intelligence agency, PET, informed him of a "concrete" plan to murder him, according to the paper that originally published the cartoons, Jyllands-Posten. Westergaard and his wife have been living under police protection since.
Well if you can get results like this, and also intimidate Yale press, why wouldn't you keep on doing it?
Yale's reasoning, as outlined in The New York Times, is presented by John Donatich in a story under the header Yale Press Bans Images of Muhammad in New Book (registration may be required):
John Donatich, the director of Yale University Press, said by telephone that the decision was difficult, but the recommendation to withdraw the images, including the historical ones of Muhammad, was “overwhelming and unanimous.” The cartoons are freely available on the Internet and can be accurately described in words, Mr. Donatich said, so reprinting them could be interpreted easily as gratuitous.

He noted that he had been involved in publishing other controversial books — like “The King Never Smiles” by Paul M. Handley, a recent unauthorized biography of Thailand’s current monarch — and “I’ve never blinked.” But, he said, “when it came between that and blood on my hands, there was no question.”
Well he's blinked and blinkered now, and deserves everything he cops.
No wonder Reza Aslan decided to withdraw his supportive blurb for the book, even though a fan of the the work, calling the decision 'frankly idiotic'.
“This is an academic book for an academic audience by an academic press,” he continued. “There is no chance of this book having a global audience, let alone causing a global outcry.” He added, “It’s not just academic cowardice, it is just silly and unnecessary.”

In response to Yale's position, Hitchens makes a couple of points:
It was bad enough during the original controversy, when most of the news media—and in the age of “the image” at that—refused to show the cartoons out of simple fear. But now the rot has gone a serious degree further into the fabric. Now we have to say that the mayhem we fear is also our fault, if not indeed our direct responsibility. This is the worst sort of masochism, and it involves inverting the honest meaning of our language as well as what might hitherto have been thought of as our concept of moral responsibility.
Last time this happened, I linked to the Danish cartoons so that you could make up your own minds about them, and I do the same today. Nothing happened last time, but who’s to say what homicidal theocrat might decide to take offense now. I deny absolutely that I will have instigated him to do so, and I state in advance that he is directly and solely responsible for any blood that is on any hands. He becomes the responsibility of our police and security agencies, who operate in defense of a Constitution that we would not possess if we had not been willing to spill blood—our own and that of others—to attain it. The First Amendment to that Constitution prohibits any prior restraint on the freedom of the press. What a cause of shame that the campus of Nathan Hale should have pre-emptively run up the white flag and then cringingly taken the blood guilt of potential assassins and tyrants upon itself.

Yes.
To which I'd add the note that it's worse than craven that Yale would plead that the intertubes can do its dirty work, rather than take a point position itself in relation to academic freedom and the right to explore ideas and images in a free society. And as for Donatich's remark that the cartoons are "easily described in words"?
Well I guess there's not much need for art or movies, if they can be easily described in words. Gratuitous to publish? Not so gratuitous as the lame excuses advanced by Donatich.
Rather than lead with the cartoons yet again - they really are offensive in terms of quality, and three links is enough for any blog and let the intertubes keep doing their sordid work - I thought I might show the images collaterally damaged by actual and respected artists. Well you might argue about Dali, but in his day he wasn't such a bad surrealist, and while Blake's a better poet than a painter, it still seems strange to get excited about a famous English artist illustrating a book of poetry by a famous Italian writer.
Sure they were produced back in the days when there was more robust dialogue between Christianity and Islam, but have you checked the kinds of portraits of Christians and Jews you can find in some quarters?
Well a pox on all their houses.
Here's to rampant militant secularism tearing down not only the walls of Christendom, but also of Islam. Oh and Yale University Press as a bonus extra.
(Below: William Blake and Salvador Dali doing a Gustav Dore). 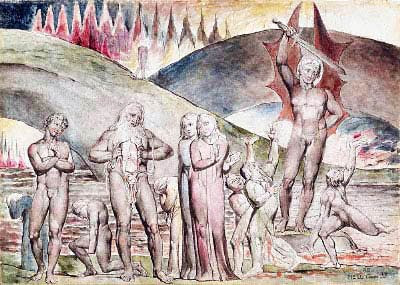 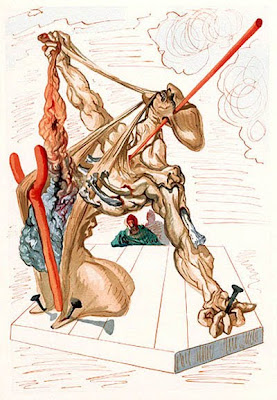