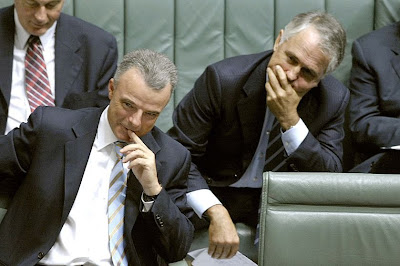 (Above: great photograph by Alan Porritt, who apparently works out of Canberra and whom you can find on Face Book if you want a dab hand with a camera).
Perhaps the best reason for Dr. Brendan Nelson to stand down is the right royal bollocking he's copped from David Penberthy in The Punch, Australia's most arid and cheapskate conversation, as recycled from the Daily Terror, Australia's most tabloid conversation.
Ratting on his leader at expense of taxpayers is such a rich example of kicking a man when he's down and soon departed it should be framed and hung somewhere. Maybe in Malcolm Turnbull's office.
The story so far: Brendan Nelson takes the Liberal party leadership, scores low ratings, is generally dismissed as a loser, and faces active, persistent white anting from Malcolm Turnbull, a man determined to get his job by hook or by crook.
And sure enough Nelson rolls over, calls a spill, loses the job, and retires with some grace to the back bench, so that Malcolm Turnbull can strut his stuff.
Unknown to anyone except Nostradamus and Godwin Grech, Malcolm determines to self-destruct in a way loser Nelson couldn't manage or imagine. And most have greeted Nelson's decision to retire from politics, give the game away, with the same grace as Nelson has shown as he departs:
Having lost the leadership, and the spotlight that comes with it, Nelson has decided to call it quits, resigning from federal parliament at the end of September.

In many ways it was a characteristic performance at yesterday's press conference: he was endearingly earnest, a little bland, occasionally emotional and sometimes even odd.

The timing of his decision, he said, was not aimed at damaging Malcolm Turnbull, nor was it because he had accepted a new job in the private sector -- although he did concede there had been a number of offers in recent months.

Rather, having come to accept that he would not be a part of the party's leadership in the future, the best thing he could do was leave as soon as possible so someone "new and energetic" could take his place. "There are other members of parliament ... who have been there much longer than I have, and who still have much more to offer," Nelson said.

Invited to stick a knife into Turnbull, and to endorse one of the Melbourne Cup field lining up for a crack at the second-safest metropolitan Liberal seat in the country, Nelson would do neither. (here).
Yep, unlike Bronwyn Bishop, who still hangs around like a bad smell and writes nonsense for The Punch, or mad uncle and now aged Wilson Tuckey, or that walking but rarely talking irrelevance Philip Ruddock, Nelson knows he's a dead duck, he'll never be Liberal leader again, he doesn't want a job in the backbench or as the minister assisting the minister for dead ducks, and he doesn't want to hang around for a year or more twiddling his thumbs watching from the sidelines, and so he wants out. Rather than hang around like an irrelevant bad smell, forced to keep his head down to avoid stray pot shots from loon journalists.
Fair enough? Not for Penberthy:
The man who never voted Liberal in his life has now done the dirty on the man who never tried to join Labor in his life.

Before considering the impact which Brendan Nelson’s sudden and petulant departure from politics will have on Malcolm Turnbull’s flimsy leadership, it’s worth noting its cost to you, the taxpayers.

By refusing to serve out the (very short) remainder of this parliamentary term, Brendan Nelson has forced the public to underwrite the significant expense of a completely unnecessary by-election.

OK – so it’s not going to send the country broke.

Huh. Let's consider the expense, but it won't send the country broke, so we can afford it? Huh sudden and petulant? Huh very short remainder of a term? Does Penberthy know about a double dissolution in December no one else has heard about? Huh never voted Liberal in his life? Not even for himself? As opposed to a cheap shot for stylistic reasons that turns Penbo's opener into meaningless gibberish?
Whenever I look at Brendan Nelson I confess I see an expression rather like a solemn, slightly mournful basset hound. But does he deserve Penberthy's whipping?
Well apart from the cost of $500k and Penberthy's blather about serving out a contract with the people of Bradfield, even if Nelson's heart isn't in it, and he wouldn't do more than warm a bench, it seems not:
The people of Bradfield are hardly battlers and are unlikely to suffer anything other than minor inconvenience at having to go to the polls for a frivolous by-election, and then return again next year for the big one.
Penberthy doesn't do much better digging up threats to Malcolm Turnbull from Nelson's desire to leave the field of battle. For a start, the Labor party isn't likely to field a candidate, so it won't be a one on one battle between Turnbull and Chairman Rudd. So Penberthy has to mount a really feeble bit of paranoia:
The first threat is that, even though the seat is held by the Liberals with a 13.5 per cent margin, and has never gone to preferences, any swing away from the Libs will be interpreted as a slight on his leadership. Labor is lying doggo by refusing to field a candidate meaning that a vociferous local Greens campaign can capitalise on any protest vote over the Coalition’s vacillation on climate policy, while also simply capitalising on the fair go factor as voters try to even up what in Labor’s absence is a one-sided contest.

So a one-sided contest against the loony Greens poses a threat to Turnbull's leadership? Puh-lease.
The second threat to Turnbull is an all-in brawl over pre-selection for this blue chip Liberal seat, set against a backdrop of already toxic factionalism in NSW, where the Right Faction has split into Judean People’s Front/People’s Front of Judea groupings, and effete Young Liberals are slapping each other’s faces at karaoke bars in juvenile intra-factional squabbles.
Well there you go. The dangers of democracy. A healthy competition to ensure the best candidate steps forward to represent the people of Bradfield - keen, willing and raring to go - suddenly turns into a Monty Python sketch? Well if it's a problem, it's a problem for Liberals in general, and not Nelson in particular.
Penberthy sounds like one of those exasperated small town footy coaches, who isn't much of a coach and doesn't know what to do with his team when a few things start going wrong:
After the low-rent vaudeville from the nuttier elements of the Coalition over the ETS in the final fortnight of Parliament, the distractions of Tony Abbott’s book, the Andrew Robb speculation, the well-sourced story over Malcolm Turnbull’s expansive flirtations with the ALP, the conservatives do not currently look like an alternative government.

Well why not use Nelson's departure to get a nice glossy compelling candidate who can help make them look like an alternative government? Instead - if you look at Nelson and any number of others sitting on the back bench like dole bludging squatters - of appearing like a team of yesterday's discarded warriors?
Rather than see the glass half full and Nelson's departure as an opportunity, Penberthy sees it as yet another disaster.
They look like some kind of broadly-based conservative think tank, where on any given day one of their number might advocate a policy, go forth with an idea, not because the party believes in it, just because it seemed like something interesting to say at the time.

Yeah well if Penberthy had the Liberals fortune at heart, he'd do a SWOT analysis instead of mindless breast beating. And he could help by stopping Bronwyn Bishop writing for The Punch, thereby improving the tone of the blog while helping out the Libs (I'm not sure how it would look wrapping a gag around mad uncle Tuckey's mouth but perhaps he could try that too).
Meantime, let's wrap up the Penbo gloom:
There’s no authority, there’s no discipline, there’s no sense of camaraderie or unity. There’s no direction. And as Brendan Nelson showed yesterday there’s no respect either, not for Malcolm Turnbull, nor for the mug voters who will foot the bill so that Dr Nelson can sashay off into the political sunset with a big bucket of super, and leave the public with the bill for this indefensible by-election.

Well there's no discipline or moderation or direction in Penberthy's mad piece either, stewing with resentment about politicians' superannuation, the cost of a by-election and phantom damage to Turnbull and the Liberal cause.
It's just mindless rhetoric like a coach who keeps blabbing on about kicking the ball up the guts or doing the hard yards in the ruck. Indeed it took a reader only a few short words to deflate Penbo's bubble of froth and foam:
The only ‘petulance’ being displayed here is from David Penberthy. Brendan Nelson has served his electorate well for the past 13 years and he has had enough.

The best way to serve his constituents is to vacate the seat and allow someone new - with all the enthusiasm Nelson had in 1996 - to take over.

Seriously, if Nelson had hung around, sought outside work, and not given his full commitment, I am sure Mr Penberthy would be urging him to ‘get out of the way’.

How about a simple ‘thank you’ for his service, and wishing him well for the future.
Yep, the game is bigger than the individual player, Nelson played the game, got thumped around and has now announced a relatively discreet, easily resolved departure, and will go off to do other things. Grace in politics is rarely sighted, but in departure Nelson showed it. Grace in journalism is even rarer, and Penberthy surely doesn't show it.
If he ever gets to read Penberthy's ill-judged rant, Nelson must surely breath a sigh of relief, and be grateful not just for his super and a new job in which he can take an interest, but above all be blessed by not having to listen to the loud chirrup of the crickets in loon pond ...
(Below: and now a couple of oldies but goodies back when people were hoping Nelson v. Costello v. Turnbull might turn into the early days of John Howard v. the pretenders). 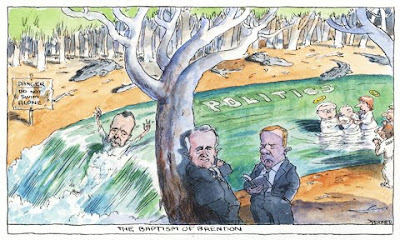 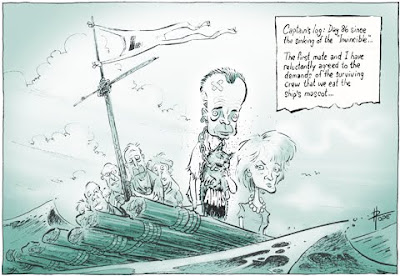 And remember when Brendan couldn't even have a drink with a Nat mate or two without causing a huge fuss? Hope he's still got a couple of bottles left so he can raise a glass and take a sip while contemplating the rabble in the bear pit who took him down without a moment's hesitation. (And yes, I did have a softer spot for him up against Peter Costello. At least he rode a motor bike and wore an ear ring in his youth, and looking like a basset hound is way better than looking like the cheshire cat). 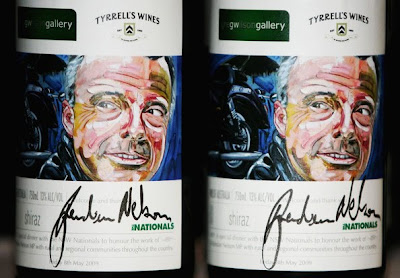