David Burchell, a bit of FDR bashing, and a yearning for Mr. Chips 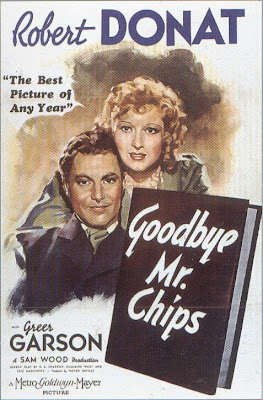 You can always tell when someone is feeling their age. They revert to history and the good old days, though the good old days were never that good, or perhaps never that bad.
But if properly burnished they can be held up as a fitting lament to these current times, as well as a dire guide to future lamentations, though personally I think it's because the old realize that they'll not be around to enjoy those future times. Youth envy is an eternal aspect of this unhappy troubled world.
What else to make of David Burchell's wrap up for his piece History, but only as we chose to remember it?
No school is going to turn down a learning centre (whatever exactly that may be) or a technology hall. But they would probably rather have teachers who were once the stars of their own schools, and literature set texts that have some standing as works of literature. And in that regard, sad to say, the generation of the 30s do seem somehow to have stolen a march on us.
Where to start? With the fey refusal to understand what a learning centre must be? Or the obligatory damnation of hall, by adding that fatal word technology in front of it? As if, you can almost hear him harumph, there was nothing wrong with woodwork and metal work and tech drawing and sewing in the old days.
Or the fateful yearning for teachers doing a Robert Donat in Goodbye, Mr. Chips, a yearning which seems to hit every generation, with the Dead Poet's Society doing it decades later. As if "teacher as star" is the best way to teach, and impart knowledge, rather than result down the track in a rather dire musical version with Peter O'Toole.
Or the notion that somehow the generation of the thirties taught literature set texts, Harold Bloom approved representations of the canon, as if (a) no decent works of literature have since been written; (b) none have been read; (c) it's gosh darned foolishness to waste student time on such idle cultural matters as the cinemah, the stage, or even television, though Shakespeare himself might have seen some merit in The Wire.
No, when you're determined to pronounce everything rooned, well it damn well better be rooned.
Yet funnily enough, Burchell is determined that we only remember history the way we choose. I guess in much the same way as he choses what he thinks about the present and the future.
Cue nostalgia, and fond memories Eric Williams's The Wooden Horse, though I did have to hold back a choking chortle when Burchell said he spent his time reading semi-literary wartime stories by authors who dreamed of being Siegfreid Sassoon or Wilfred Owen.
I presume he's not referring to the Sassoon who penned entirely bleak works about World War 1, after being shot in the head in a friendly fire incident, and then spending the rest of his life in a post war gloomy funk.
Or Wilfred Owen, who wrote some of the most memorably bleak poems about war you might wish to read before slashing your wrists, killed one week before the armistice 1918.
I can't remember Captain W. E. Johns thinking of those two when he wrote the Biggles books.
Still I guess we choose to remember history the way we prefer, so it's fitting Burchell broods yet again about the relationship between baby boomers and their war time parents, before settling on a kind of partial attempt to replicate recent right wing American attempts to discredit or diminish Franklin D. Roosevelt (though he doesn't quite go so far, as some have, to credit Roosevelt for planting the seeds of the recent GFC).
As another example of our creative powers of memory, take the controversy around the federal government's frantic, improvised responses to the global financial crisis. Since most of those who experienced the Depression are dead, we're free to invoke the imagined spirit of the dole queue, or Franklin D. Roosevelt and the New Deal, without fear of contradiction. Yet even a casual student of the 1930s would have to admit, if they put their hand upon their heart, that the legislative response to the Depression in the US was at least as arbitrary, opportunistic and ill thought through as anything our own would-be FDRs could possible envision.
Well yes, I suppose, in much the same way as Churchill's strategies and responses in the second world to sundry crises was at least as arbitrary, opportunistic and as ill thought through as anything our own would-be generals could possibly envision when it came to fighting the war in Iraq, and now manage in the fighting in Afghanistan.
Hindsight is a wonderful thing, especially when designed to abuse someone for doing what they can without knowing quite how things might work out. But enough, time now for the character assassination:
Roosevelt, who nowadays has come in some circles to assume the character of a saint, was in life as crafty and temporising a politician as was ever born. His economic policies (what his earliest and most un-illusioned biographer, James MacGregor Burns, described as the economics of the "broker state") required endless doses of improvisation, along with "a host of energetic and ill-assorted government programs and economic betterment without real recovery". And his governing style involved balancing the interests of the strongest interest groups at the expense of the weaker ones, in the process buying "short-term political gains at the expense of long-term strategic advance". None of this is exactly unfamiliar.

Come to assume the character of a saint? Well I guess you have to set up the straw man so you can set it on fire. But I can't imagine anyone the adulterous Roosevelt was a saint, at least by bourgeois standards, after his affair with his wife's social secretary (which meant that Eleanor refused to come back to his home and live with him in 1942 when his health deteriorated). But then Burchell is given to banal observations, and dressing them up as if they're powerful insights. Like the news that FDR was a politician:
Like the democratic cynics of our own day, FDR happily pursued at all times, with almost geometrical precision, a path calculated to secure the maximum political advantage for every dollar of economic stimulus spent, all the while harmonising the electoral cycle to the fiscal one.

No way, I thought his first job would have been to implement policies and programs that ensured he was defeated by Kansas Governor Alf Landon in 1936. Wanting to stay in power? How outrageous and outlandish. Yep, luck favors the devil:
But then, what should we expect? As the era's sage, J.M. Keynes, happily pointed out, the good fortune of the slump was to have made economic expansion and political expediency into siblings.

So what's the real point of taking a jaundiced look at FDR? Well of course it's actually to take a jaundiced view of current politicians and their delusions about nation-building. Compare and contrast:
In one sense, the chief economic legacy of the Depression to us is merely that hard times can be made to license a species of policy exuberance that might in other times be labelled as carelessness.

It was FDR's great advantage over our would-be FDRs that his programs really were nation building, in a practical and material sense. Then there were roads where roads had never been, while dams brought electricity to candle-burners.

Whereas that national broadband network is made up of digital thingies and widgets and what nots, and do we really need to spend all our time on the intertubes, wasting lives staring at empty screens? As opposed to building a good solid road and a bloody big dam?
Now you might wonder if any of this old infrastructure might need replacing or at least restoration - bridges in the United States, for example, have a habit of falling down - and you might also wonder whether during the grand days of John Howard we might not have pissed a lot of the mineral boom against the wall rather than fixing up failing infrastructure and preparing new infrastructure in readiness for a shifting, changing world. You might especially think this if you have a child in a public school, where teachers struggle and children face realities far removed from a well fed private school.
But you would of course be deluded in Burchell's eyes:
Our would-be FDRs, by adopting the mantle of nation-building without really comprehending its original purpose, have in effect played a joke upon themselves and us.

Never mind old chum, just be grateful - if all you can think of as nation building involves dams and roads - that the times have moved along, that the old ways are rapidly changing and your children will in due course be beyond your control.
And that even if current decisions are made with the usual mixture of haphazard ignorance and guessing and half assed planning, at least they're being made by people a bit more wired into the way the world is at the moment, and the way it might work in the future.

What? Steady on. Come back Mr. Chips, come back. We need our Greek and our Latin. How else are we to understand your joke about Lex Canuleia, the law that allows patricians to marry plebians. But then you might recognize the eternal appeal of the imagined conservative past in this dialogue:
Headmaster: Look at that gown you're wearing. I happen to know it's a subject of amusement to the whole school. A year ago, I told you that I wanted the new style of Latin pronunciation taught. And you totally ignored it.
Chips: Oh that! Nonsense in my opinion, nonsense. What's the use of teaching boys to say Cicero [with a hard C] when for the rest of their lives, they'll say Cicero [with a soft C], or say it at all?...
Headmaster: There you are. I'm trying to make Brookfield an up-to-date school, and you insist on clinging to the past. The world's changing, Mr. Chipping.
Chips: I know the world's changing, Dr. Ralston. I've seen the old traditions dying one by one. Grace and dignity and feeling for the past. All that matters here today is a fat banking account. You're trying to run the school like a factory for turning out money-making, machine-made snobs! You've raised the fees, and in the end, the boys who really belong to Brookfield have been frozen out, frozen out. Modern methods! Intensive training! Poppycock! Give a boy a sense of humor and a sense of proportion and he'll stand up to anything! I'm not going to retire. Do what you like about it.
So it goes. But Chips is right about a sense of humor. You need it when reading David Burchell.
(Below: FDR thrashing the fiscal lion. Never mind that in 1921 at the age of 39 a fever produced a paralysis of the lower extremities, which he did his best to hide, and to ignore, during the course of his political career. Ah to be sure, he was a saint of a man, no matter how they try to kick away his crutches and put him in history's wheelchair. Well if Burchell can blather one way, why not blather the other?) 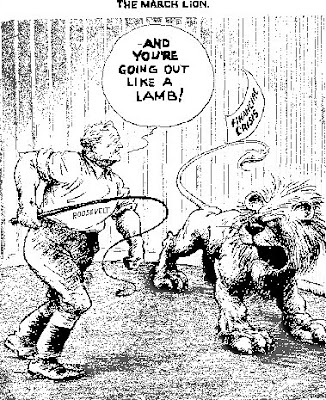